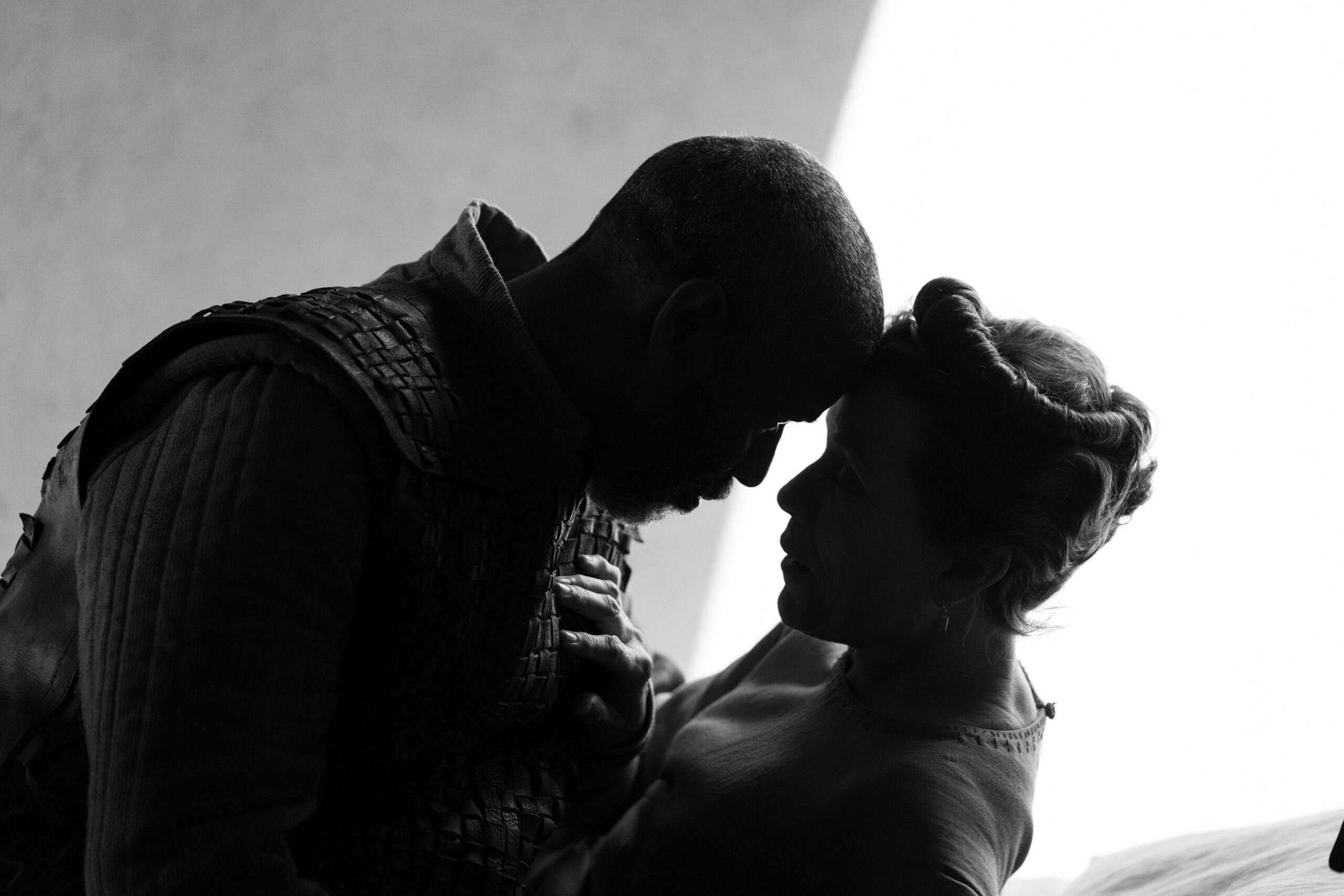 NYFF 2021: The Tragedy of Macbeth Review

Joel Coen’s The Tragedy of Macbeth is a story told in shadows. Dark figures contemplate, plot, and scurry through askew geometry and a foreboding soundtrack. They emerge from opaque horizons, obscured by smoke and dread, bound for opportunity or vengeance. In both cases, they seize what they seek.

Writer-director Joel Coen has long been a formalist. He embraces the tangible elements of cinema craft to convey his tales of crime and consequence. Some of his work has been criticized for its reliance on things like set design, lighting, camera movement, and lens choice. But in The Tragedy of Macbeth, his expertise allows him to paint a threatening world with an inspired and confident brush.

William Shakespeare’s “Scottish play” has been performed and interpreted countless times in its over 400-year existence. It ranks among his most popular plays and is often used to introduce students to his work because of exciting elements like murder and the supernatural. Those hooks happen to also be present in much of Coen’s work, making Macbeth a fitting tale for him to interpret. It’s worth noting, this is his first production without his collaborator and brother Ethan.

Coen has long been a fan of working in the noir genre, from Miller’s Crossing to The Man Who Wasn’t There. The hard shadows and tilted camera angles used in film noir impart a sense of unease and worry as characters with dubious morality carry out nefarious. Those design elements stem from an earlier film movement, German Expressionism, which depicts macabre and grotesque characters with sloped surroundings and elongated shadows that also lead to what we now think of as horror.

Coen was first approached by frequent collaborator and wife Frances McDormand, who plays Lady Macbeth, to direct a stage production of Macbeth. Coen was reluctant to direct for the stage but interested in adapting Shakespeare’s famous tragedy. He was intrigued by the cinematic possibilities but didn’t want to abandon the notion of the play. What was interesting to him was taking a play and making a movie, not trying to make a play into a movie, he said in an interview. With The Tragedy of Macbeth, he blends horror and noir with the original, albeit trimmed, Shakespearean text to present a gorgeous and captivating rendition.

Coen worked with director of photography Bruno Delbonnel to bring this ominous atmosphere to the film. Macbeth’s castle has a stark and austere brutalist design, with structures that cast long, hard shadows that are further accentuated by the choice for the film to be in black and white and in a square format. Delbonnel is a returning Coen crew member and has worked with another auteur heavily influenced by German Expressionism, Tim Burton.

Together, the two create shapes that confine and terrorize the characters and are used to melt one scene into another with hypnotic transitions. Scenes outside the castle, shot on a set, look as if a bomb had recently been dropped on the landscape. The land is scarce and smoldering, with fog and valleys that shroud unknown menace. It’s incredible how much is done with so little.

Much accolade deserves to go to the cast, varied in multiple ways: old and young; Shakespearean veterans and novices; American, English, Irish. The highest praise goes to the film’s lead Denzel Washington, who is spectacular as the titular Macbeth.

The role has been played by towering figures like Orson Welles and Ian McKellen and requires no small amount of gravitas. The power and charisma Washington is able to impart to the haunted king make for one of the great performances of his career. The lines that now crease his still beautiful face bring the markings of someone who’s seen his share and is ready to risk it all.

Washington has become someone we take for granted. Though he continuously turns in outstanding performances, it’s rare when his recent work resonates with the zeitgeist. This is a no-brainer nomination for Washington as Best Actor at the Academy Awards and could bring him back to the podium and into the forefront of our collective consciousness.

At his side is his partner in crime and enabler, Lady Macbeth. McDormand, who is also a producer on the film, unleashes a performance that seems like she’s been bottling up for the entirety of her accomplished career. Corey Hawkins, who plays Macduff, holds his own as he battles Macbeth. Stephen Root is an inspired choice to play the castle’s drunken porter in one of the few scenes of levity.

In a wonderfully ghoulish performance, Shakespearean veteran Kathryn Hunter contorts and transforms in her roles as the witches and the old man.

Bertie Carvel, who plays Macbeth’s betrayed friend Banquo, said he believes Macbeth endures because it “can take the weight of interpretation.” Coen took all that he’s done before and channeled it with masterful execution. The Tragedy of Macbeth is a standout addition to the cinematic lineage of Shakespeare, as well as the illustrious careers of Coen, McDormand, and Washington.

Licence to Kill Remains in the Top Tier of Bond Movies