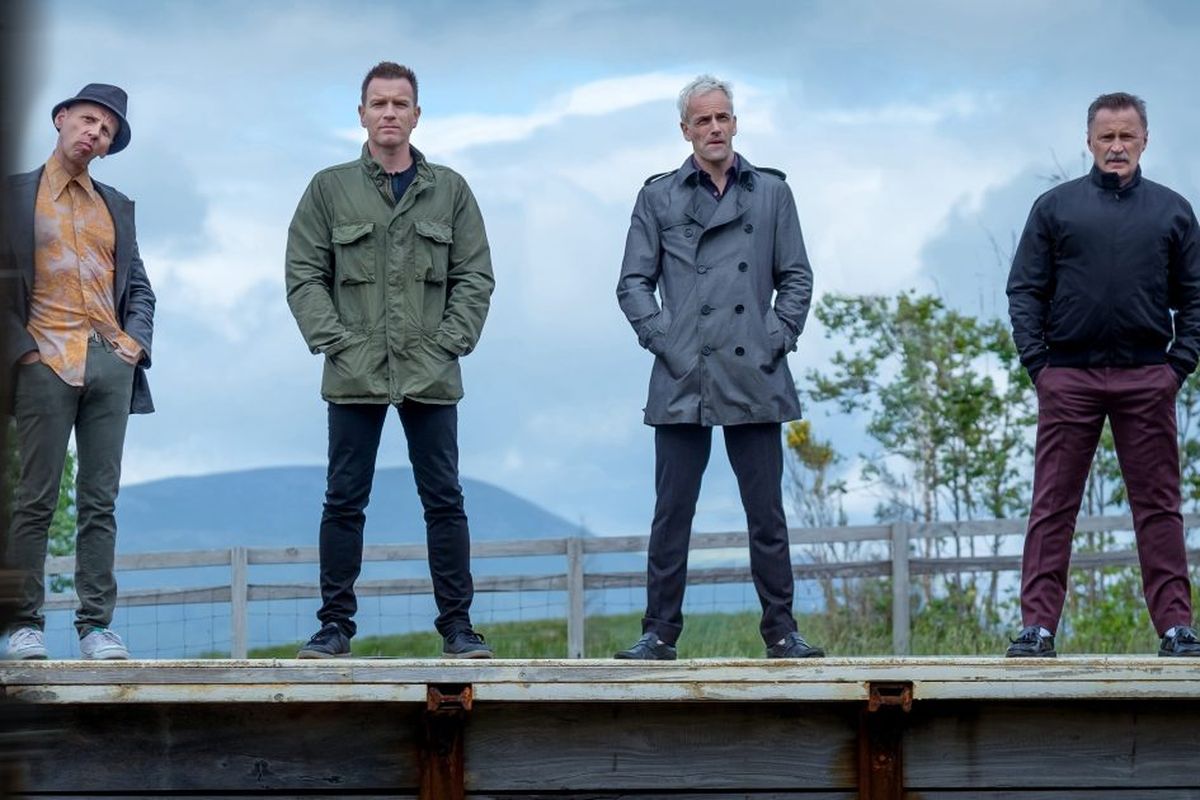 Those without a future tend to relive old glories; when there’s nothing to look forward to, why not indulge in some comforting nostalgia, the kind of rose-tinted sentiment that buoys the self esteem of former high school quarterbacks and aging loser heroin junkies? It’s not productive, won’t get anyone anywhere, but it sure can feel good, a shallow high that momentarily medicates and distracts from the frustration of figuring out what to actually do next. Even successful filmmakers aren’t quite immune to the desire to keep their singular achievements alive and relevant, even if those breakout moments belong in the past. To that end, we have T2 Trainspotting, a sequel to a pulsing, adrenaline dump of a breakout film that’s as slow-witted and meandering as the once-beloved characters it brings back. While pointless and a little sad, like a typical 20-year class reunion, those who have a fondness for the sheer youthful vitality of the original will find the visit a pleasant trip down memory lane, a poignant reminder that time catches up with us all.

Picking up two decades after Mark Renton  (a strangely relaxed Ewan McGregor) swindled his mates out of their smack sale score and subsequently skipped town, T2 Trainspotting sees the once-rambunctious Scot return from self-imposed exile back to his native Edinburgh, only to realize that while the world has made progress, he and his former cronies have not kept pace. Lovable idiot Spud (Ewen Bremner, gangly and bobble-headed as ever) never kicked the habit, continuing to screw up every opportunity and relationship in his grungy life, while Sick Boy/Simon (Jonny Lee Miller with his perma-sneer) has traded heroin chic for the business man’s drug, snorting cocaine as he blackmails local community stalwarts in an attempt to raise funds for a brothel. Meanwhile, the group’s violent lunatic, Francis Begbie (a time-worn but still vicious Robert Carlyle), has been paying for the sins of them all, pent up in a prison cell, caged if not quite tame. For some reason, no one has quite gotten over Renton’s betrayal, and so his return, coupled with a few plot conveniences that see Begbie escape and Spud’s attempt at ending it all thwarted, sets in motion a semblance of a plot involving re-connection and revenge.

The sight of these once-smiling, once-dashing, once-vivacious petty hoodlums reduced to world-weary, directionless 45 year-olds is a bit jarring at first, but that’s sort of the point. T2 Trainspotting makes no bones about its view on life passing these men by, their stunted development a result of their own lack of ambition, not the inconsequential loss of a four thousand pound share they each so bitterly blame in an attempt to excuse themselves. Despite their laundry list of glaringly horrible flaws as human beings, the gang used to have a gleeful impishness going for it – magnetic scum that maybe had no future, but was at least actively engaged in the present. Sure, a litany of nefarious and disgusting deeds were performed, but with gusto, with elan. Now Renton and Simon mostly mope around woefully, Spud lopes from place to place without a thought in his head, and Begbie is sapped of his raw power. What’s left to care about?

Eventually the turning world leaves everyone behind, and what was once our oyster becomes an empty shell. This element is easily T2 Trainspotting‘s strongest, a great setup for a stark examination of the destructive power of living in the past, but unfortunately director Danny Boyle and writer John Hodge don’t seem to have fully committed to it, instead relying on a rather elementary (boring) heist-like plot to drive events forward, as if they could think of nothing better, unsure whether Renton, Simon, Spud, and Begbie alone can be of interest. Even Boyle’s usually kinetic camerawork has slowed down a bit here, though he and cinematographer Anthony Dod Mantle still inject enough stylishness to evoke a glimmer of go juice. Still, it’s the sort of imitation that will fade quickly, lacking the raw grit and relentlessness of its predecessor, taking a more (gasp!) mainstream, slick approach. The script suffers from the same fate; whereas the original eschewed a standard three-act structure in favor of bold, reckless jumping from one unconnected skanky storyline to the next, T2 plays it as safe as a suburbanite, as if it actually had something to lose, and in the process almost loses everything.

Almost, but not quite. Trainspotting is an incredible film, one that sears itself into the brain with dialogue and images that attach themselves to whatever part controls sentimentality. Simply seeing these four men brought back together in T2 Trainspotting is enough to deliver a nostalgic fix of sorts, a feeling of contented pleasure that may possibly remind certain audience members of their roguish youth. Boyle packs in a plethora of references and flashbacks, including footage from the first film, that should make the producers of the Star Wars sequels blush, and when the story is allowed to go off on tangents and let these men be themselves, such as a scampish scheme to steal from patrons of a unionist pub, or McGregor and Miller’s childishly enthusiastic and incomprehensible ravings about soccer star George Best to token female Veronika (Anjela Nedyalkova), that old spark returns for just long enough to remember why being in the company of this particular group of junkies was so damn entertaining in the first place.

Still, how much one enjoys T2 Trainspotting will depend on whether the joy of hearing old stories from old friends outweighs the romantic image shattered after seeing what they’ve become. Perhaps some will always want to remember the people they once were drawn to as the burning flames they used to be, not the smoldering ashes whose fire now seems doomed to be soon extinguished. Either way, this sequel to one of the most blazing, memorable films of the 90s has the same effect as a mere stop-and-chat with a faded acquaintance, a pleasant but entirely unnecessary catch-up that goes in one ear and out the other, destined to be forgotten by a world that has moved on; an unnecessary but not entirely unwelcome reminiscing of the good old days.

We’ll always have the Worst Toilet in Scotland.

‘A Monster Calls’ and the Nature of Grief