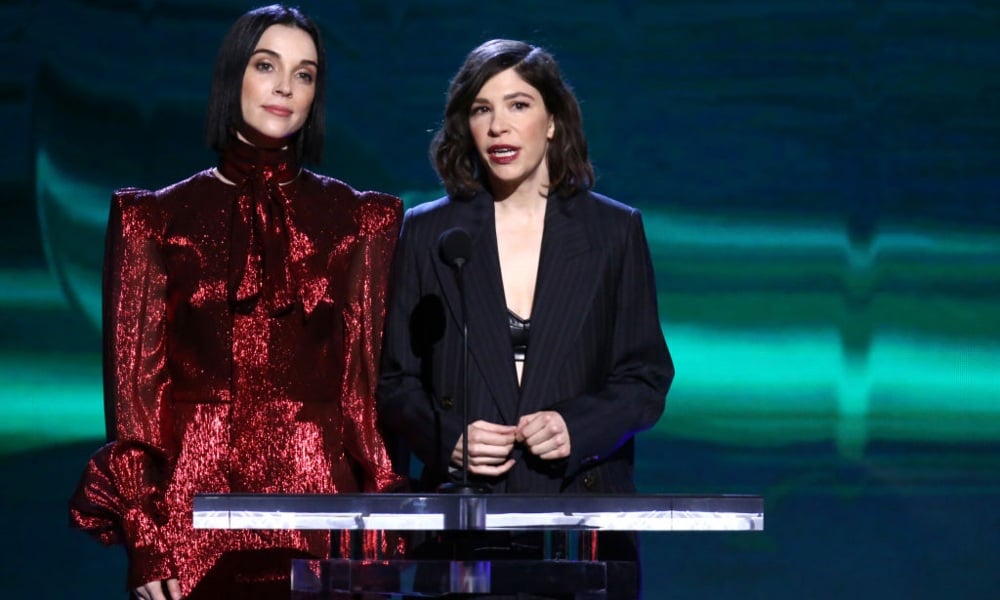 The term “midnight movie” is somewhat amorphous; it can include everything from legitimately great films (Eraserhead, The Rocky Horror Picture Show, Night of the Living Dead) to utterly terrible films (The Room, a variety of low-budget horror standbys). What brings these high and low cultural artifacts together is a lack of concern about taste. They’re transgressive, extreme, sometimes thought-provoking — by the end, you might feel as if your heart is about to crack through your ribcage, or you’ll be embarrassed at the thought of anyone noticing just how hard you laughed. It’s unlikely that anyone will experience any of these feelings by the end of the St. Vincent and Carrie Brownstein–starring The Nowhere Inn, a midnight movie in aspiration only that’s neither extreme enough to shock nor funny enough to delight.

The Nowhere Inn begins earnestly enough as a pseudo-documentary purportedly directed by Brownstein, now expanding her many talents to include directing (she’s also the lead guitarist of the seminal rock band Sleater-Kinney and best known as an actor for her work opposite Fred Armisen on Portlandia). Her subject is her friend, singer and fellow guitar virtuoso St. Vincent (Annie Clark), who’s on tour supporting her critically acclaimed album Masseduction (2017). Early on, Brownstein imagines her documentary to be a mix of concert footage and revealing behind-the-scenes moments, but her dictate to “be yourself” backfires when it turns out that Clark doesn’t do or say anything that exciting off stage. The footage is mostly ab workouts and discussions of how her bandmates like to eat radishes and anything that “tastes like dirt.” It’s only when Brownstein urges her friend to be more interesting off stage that the film begins to take shape — and reveals its biggest failings.

Hoping to please her friend, Clark adopts her St. Vincent persona full-time, becoming a chic rocker ice queen. But it’s not just her practiced aloofness; she hires actors to play her family because she doesn’t want to speak about her real father, who went to prison in 2010 for fraud. She also plays up her relationship with Dakota Johnson, playing a hilarious version of herself, presumably inspired by Clark’s real-life relationship with Kristen Stewart. But all of her deceptions seem designed less to make her seem more interesting in the film than to drive Brownstein insane.

Clark and Brownstein have said their film (which is directed by Brownstein’s Portlandia collaborator Bill Benz) is inspired by Donald Cammell and Nicolas Roeg’s Performance (1970) about a rocker who begins to influence and warp a gangster who’s holed up with him. It’s not a hard connection to make, but there’s none of Performance’s menace in The Nowhere Inn. Every moment in which it might finally tip into madness is undercut by lukewarm humor that generates modest chuckles at best. Clark is fitfully convincing as an actress, but she pulls back when she needs to go big. Brownstein is a more compelling figure, but she’s stuck playing the straight woman for most of the film, which doesn’t give her comedic talents room to flourish. The two are legitimately hilarious in their few scenes with Johnson, who’s totally committed to the cameo part, but most of The Nowhere Inn feels like a slog. The film was always intended to be fully scripted (written by Clark and Brownstein), but by the end, I wished they would have taken the on-screen Brownstein’s advice and just made it into a concert film. There’s nothing in The Nowhere Inn that lives up to St. Vincent simply rocking out on stage with her guitar.

Revolutionary Road Is More Than Just an Indictment of the Suburbs