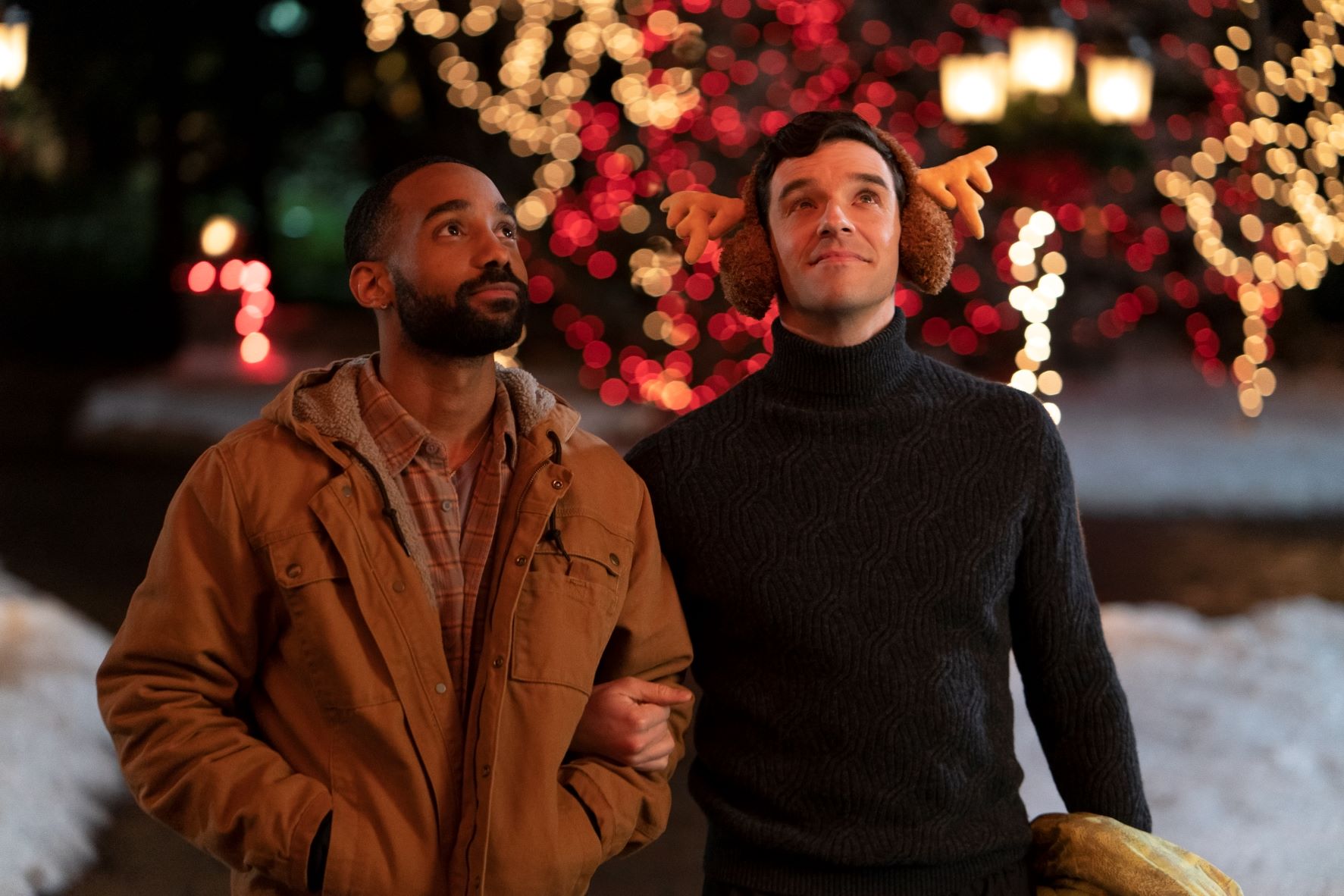 Netflix’s Single All the Way opens with shirtless male models wearing Christmas hats, red bowties, and shaving cream beards. It’s an iconic opening for the streaming platform’s first holiday romantic-comedy about a gay couple. By the end of this delightful film’s shenanigans, it’s somehow not even near the most memorable moment.

When Peter (Ugly Betty’s Michael Urie) asks his best friend, Nick (a captivating Philemon Chambers), to come back to his hometown with him to celebrate Christmas, he doesn’t know that his mom has set him up with the most eligible gay bachelor in town (Luke Macfarlane, Killjoys); Nick and Peter don’t know that they’re about to realize they have feelings for each other; And none of us know the lengths that Peter’s family will go to meddle in his love life and ensure that he gets a happily ever after with the perfect man for him.

Single All the Way is a best-friends-to-roommates-to-lovers story with a whole lot of family support to get the couple together. Somehow, even in an era of excellent queer television, a gay rom-com this fantastic and free of trauma feels too good to be true. But it is! Simple as that.

Peter (Urie) knows all the local gays and has finessed his way to the top of the social scene, but he’s unhappy working in social media, and he can’t seem to hold onto a relationship for longer than a few months. The exception to that rule is his sweet, supportive best friend and roommate, Nick.

Nick (Chambers) lights up Peter’s eyes from the moment he walks into a room. He’s a children’s book author with a bestselling story about his rescue dog, but he spends more time taking on handyman projects through an odd-jobs app than he does writing. Nick is phenomenal with children, engaged in wholesome activities all through the trip, and beloved by Peter’s entire family.

There’s an unmistakable depth and spark to the chemistry between Nick and Peter—whether they’re bickering in a wine shop or silently negotiating using their eyes alone— that feels like they truly have been best friends for nine years. And like Netflix’s catfish Christmas rom-com Love Hard, Single All the Way excels at showcasing an actor of colour as the enchanting, unfathomably endearing love interest. (As per The Hollywood Reporter, Philemon Chambers is the first Black actor to star in a LGBTQ Christmas rom-com.)

Seeing Nick relaxing in their home wearing a durag is top-tier Black hair representation that Netflix hasn’t always succeeded at with its other films. Between him reading storybooks to Peter’s nephews and the ease with which he soothes Peter’s panic, it’s impossible to contain the magical combo of swoonworthy scriptwriting and Chambers’ remarkable romance-hero shine.

It’s a pleasure to watch Netflix’s undertaking of the gay community’s “and they were roommates” inside joke as they turn it into a wholesome romance. There is no shame, no homophobia, no trauma, and no coming out story. Single All the Way is pure holiday cheer and warm, Christmas festivity. It’s a simple quest for love starring several handsome, thoughtful men —and just as many fantastic, hilarious women.

A tremendous “by us, for us” energy resonates through this film, which is written, produced, directed by and stars queer people. It’s evident in the affirming queer friendship that Nick and Peter share, and in the comedy of acknowledging that yes, HGTV (“What is that, the Homosexual Gay Network?” Peter’s dad asks) kind of is porn; It’s white-hot when Jennifer Coolidge’s character proclaims that “the gays just know how to do stuff, and for some reason they’re always obsessed with me.” And it’s bright with nostalgia during Peter’s choreographed dance routine to Britney Spears Christmas song ‘My Only Wish (This Year)’.

There’s a specific warmth that comes with the familiarity of an ensemble cast that has been in our homes for generations. The work we’ve seen many of them in has often been quite camp; Here, of course, the storyline leans deeply into wholesome and cheerful, but scriptwriter Chad Hodge (Wayward Pines, Good Behaviour) delivers a refreshing combination of sincerity and wit, freeing audiences from the expected beats of stale humour from Christmas films past. The cast’s performances successfully carry the script’s undeniable joy without the over-the-top, wait-for-the-cringe-line energy of a typical holiday film.

The cheesiness lies in delightful places like using puns in the characters’ Instagram handles, the heartwarming silliness of Peter calling himself a “FOMO-sexual” when he’s missing out on spending meaningful time with his family, and Peter’s mom consistently failing to say the LGBTQ+ acronym correctly while eagerly explaining things she’s learned from a book about parenting queer kids.

Single All the Way is only cringeworthy when it’s meant to be for the character in the scene; Peter’s mom setting him up on blind date with her gorgeous trainer after bragging about him non-stop, for example. The acting always feels natural, the writing genuinely entertaining, the camerawork and editing economical and polished. This is the romantic comedy that queer audiences have always deserved:

Reluctantly participating in holiday traditions with your welcoming family, while falling in love with someone who’s been there for you all along is the Christmas spirit on screen as heterosexual people have had it for decades! In fact, Peter’s family is so overjoyed at the idea of setting him up with a man they believe is perfect for him, that for much of the film, his biggest problem is that he’s been set up with someone incredibly appealing and is enjoying himself on those dates. This is lightyears away from the shame-filled, traumatic problems mainstream movies generally allow queer people.

It’s pure, emotional magic when Peter’s father gently suggests that Nick is the most meaningful relationship in his son’s life, and that he always thought they should be together. Peter’s teenage cousins sneak in to say that they agree, and the hope of a romance swoops through the room. This enthusiastic, genuine support from Peter’s family is something that’s sure to bring a tear to the eyes of queer viewers, for whom the rarity of that kind of representation will not be missed.

Though brief and humorous, Peter’s father insisting about Nick that “You’re a ten! He’s a ten.” is one of the most striking, moving moments of the film —because his passionate support for the two men as a couple allows Single All the Way to be the Christmas wish come true that so many queer people haven’t got yet, and desperately need to see.

With a literal storybook ending, Peter’s whole family cheering as they kiss at the end, and an energetic original holiday jingle performed as the credits roll, Single All the Way is a Christmas film for the ages —and a blessing to us all.

The Tigress of Shaolin is an Aimless and Pointless Shaw Bros. Film