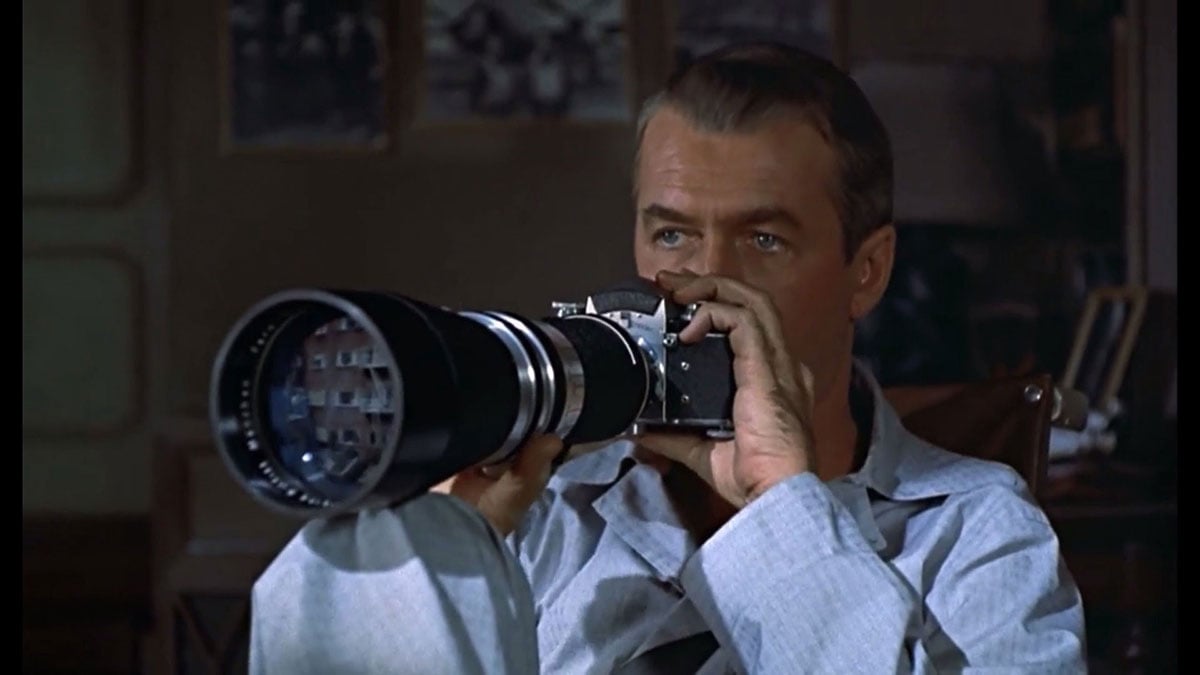 While deservedly known as the Master of Suspense, Alfred Hitchcock’s playful side is often overlooked when it comes to some of his greatest nail-biters. Sure, North by Northwest is a renowned work of train-hopping fun, To Catch a Thief is loaded with entertaining silliness, and some of his earlier works like Young and Innocent and The 39 Steps can still evoke the thrill of being on the run, but so many of the director’s masterpieces are admired for their darker subject matter. Such is the case with 1954’s Rear Window, an endlessly discussed peek into the shady excitement and violation of voyeurism — that also happens to play like a lighthearted call to adventure.

No doubt that the creepy peeping perpetrated by hotshot photographer L.B. Jefferies as he stares out the window of his modest apartment and into the lives of his surrounding neighbors dredges up both understanding and possibly a little guilt from audiences who sympathize with urge to stick their noses into someone else’s business, but also believe that its better to mind one’s own. There’s certainly a gentle chiding toward this kind of behavior, and Hitchcock’s clever use of the camera to make the viewer complicit in these spying actions while commenting on the idea of cinema as voyeurism in general can’t be ignored. But is a contemplation on the seedy underbelly of human nature really what audiences are supposed to see in Rear Window?

An upbeat, jazzy score, an abundance of brightly lit daytime scenes, and enough dueling wisecracks to make a comedy sit up and take notice suggest otherwise. Far from the dirty, shifty-eyed deviant that critics sometimes make it out to be, maybe Rear Window is just plain fun in how it spurs viewers into getting involved with the world around them instead of just passively observing. It invites them to consider their fellow human beings and what they might be going through, to envision motivations and desires and needs outside our own, and to make a game of it. Perhaps its methods of peering through binoculars while engaging in rampant speculation are not exactly wholesome, but hey — these folks do solve a murder, after all.

Despite that classic shot of Jefferies rolling back until darkness covers his face, what Rear Window conveys is the enjoyment of people watching. The various neighbors are presented without judgment, without the usual assortment of cinematic angles that might convey angelic or sinister; their activities and quirks are simply ‘looked’ at, and part of the fun is filling in their stories by being observant and making deductions. What is the backstory of the piano player? His increasing stress over his struggles suggest someone on the verge of giving up. Will Miss Lonely Heart ever find love, or is that practicing for dates a sign of an impending nervous breakdown? What exactly is going on behind the pulled-down shade of the newlyweds? Those with any life experience will likely wear smirk similar to James Stewart’s.

The dog in the basket, the lounging sculptor, and the bickering couple across the way all tell stories, all suggest a great, unknown world out there — even if presented in a microcosm only a few feet away. While Jefferies has been itching to get back into the action on a global scale, believing that cool, interesting things are only happening somewhere else, Rear Window reminds us that there’s intrigue around every corner, that there’s plenty to get involved with right in front of our noses. So when a blood-curdling scream pierces out through the night, should we as a society just look away, or focus our attention?

As someone constantly seeking adventure, Jefferies has no trouble inserting himself into the situation and conducting his own amateur investigation. It’s easy to look down on him for prying, for suspecting, for spreading rumors — and because many of the other characters initially do this, it’s easy to imagine that Rear Window as a whole is doing the same — but one by one each of his naysayers is also lured in by the fun. The question of whether Lars Thornwald murdered his wife or not becomes a game of Clue, and though it might seem callous to view fellow humans like pieces from a board game, would it be better to operate day in and day out with blinders on?

Rear Window at times seems to argue otherwise. Consider how each new discovery of circumstantial evidence is designed to perk up ears and raise pulses: the lingering shot of the knives, glimpse of the wedding ring, the tension in the moment the dog is discovered digging up the flower bed, and it’s subsequent death. Hitchcock wants us to get excited, because though there may be a little bit of self-critique here, he actually finds this fun too. Listen to how blue-collar insurance nurse Stella revels in describing the gory details of the murder, eliciting ‘shocked’ giggles from Jefferies’ socialite girlfriend, Lisa (and us). See the wild look in the the impeccably mannered Lisa’s eyes as she volunteers to excavate the flower bed, and subsequently takes a risk by climbing a fire escape in order to illegally enter Thornwald’s apartment in search of clues. Watch Jefferies’ mix of vicarious thrills and pride as his lover shows an adventurous side he never knew she had.

All the while, that mischievous score eggs everyone on, and the sarcastic one-liners just keep piling. Try not to laugh at Stella’s morbid theories (clearly meant to get a rise) or every time Jefferies and his low-energy detective buddy, Doyle, verbally spar over the validity of the investigation, and the latter’s lack of intensity regarding it. The character of Doyle is not only a skeptic, but a stand in for all the fuddy-duddies who just want to leave well enough alone. He’s no fun; let’s get back to the murder! Far from discouraging busybody behavior, Rear Window seems to slyly wink at it, even as we’re supposed to admit that what they’re doing is technically ‘wrong.’ The smile on Lisa’s face as she discovers the jewelry handbag is proof enough of the good time.

And yes, Hitchcock eventually turns up the heat by having his sleuths discovered by the murderer, which leads to an edge-of-the-seat ending, but what are the consequences for poking their noses where they supposedly don’t belong? Another broken leg for Jefferies — but a newfound spark in his love life — and justice for a dead woman. Perhaps the surest sign that Rear Window isn’t frowning on the intrusiveness of its main characters into the lives of their neighbors is the lack of ‘punishment’ that Hitchcock otherwise likes to dole out to transgressors. Jefferies and Lisa both get what they want; they are rewarded. And why not? Because they dared to get involved, this cozy community was just made a little better (and this is without including their near-intervention in Miss Lonely Heart’s sad-but-ultimately-happy affairs).

In the end, everything works out for everyone; everyone gets what they want (there’s even a new puppy on the block). Jefferies gets his excitement, Lisa wins respect, Doyle gets a collar, and Thornwald presumably gets a sentencing — smiles (almost) all around! Does that sound like the finale of a sordid affair oozing with sleazy leers and shadowy peers? Though Rear Window certainly addresses subject matter that hints at a darker side of human behavior, it’s also very possible to view these behavioral tendencies in a different light — possibly as part of why we gravitate toward living around each other, and a great excuse to look outside ourselves to find adventure. It’s a fun, funny, exciting film that delights more than it darkens.

‘Bliss’ is a Psychedelic Cocktail of Violence and Metal