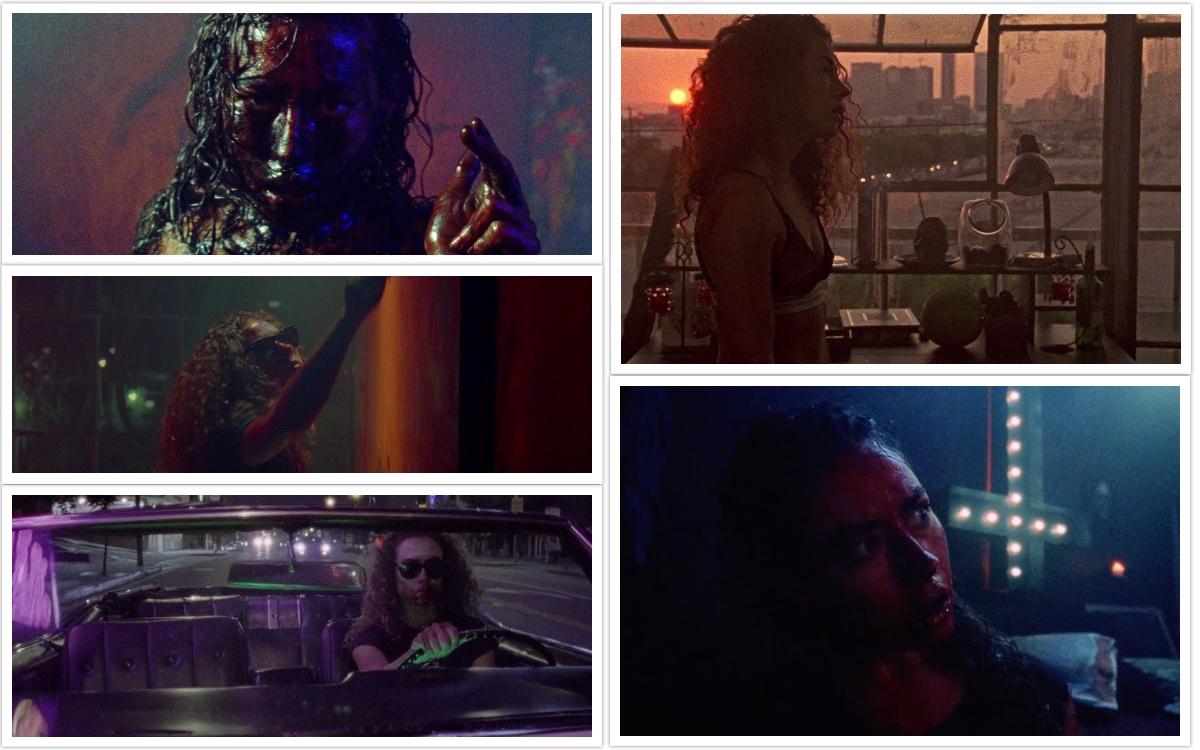 Grimy and dirty, Joe Begos’s Bliss is a volatile cocktail of sex, drugs, and rock and roll injected directly to the brain. As things spiral further and further out of control for its protagonist, the film delves deeper into the headspace of a junkie — albeit with a more sinister and gory approach. Not afraid to go the extra mile, Bliss doesn’t always work in making an audience care about what’s going on, but it certainly doesn’t stop dripping with a dingy, psychedelic atmosphere that is unmistakably remarkable.

With a due date looming closer and closer, Dezzy (Dora Madison) is having a difficult time finishing her latest painting. Meanwhile, she’s also buried deep in debt and is having severe trouble paying her rent. In order to get over her creative block, she takes a drug that has her creative juices flowing — but that drug ultimately does more than she could even imagine. As her mind starts playing tricks on her and she descends into madness, the line between reality and hallucination becomes thinner and thinner. All of this is to say that Bliss is unrelenting in portraying a hellscape from the perspective of a drug addict. While the drug in question is fictionalized and bonkers, Bliss doesn’t let that color its portrayal of Dezzy, as she goes through withdrawal like she’s never experienced before. That withdrawal is ultimately followed by an abundance of sex and intoxicants that takes Dezzy to her highest high, and ultimately frees her mind into making the painting she so desperately needs.

There is a layer of filth to Begos’s film that never comes even close to being clean. Shot on film, Bliss looks appropriately grimy. Matching the visuals is a soundtrack filled with fantastic metal songs that feel like they bleed into the movie’s entire aesthetic. The best kind of horror is the kind where everything feels indebted to each other; the cinematography exists the way it does because of the music and the heart of the protagonist, whose dependency on drugs and love for metal leads to the film being edited in the way it is because of how the screenplay is intended to unfold. This is a very intense film to experience, and it works out that way because of how all the pieces fit together. A masterwork in style, Bliss is absolutely deranged.

Where things work less in its favor is the actual characters. While nothing bad can really be said about Madison’s performance as Dezzy, she’s playing a character that we never really see in a good light. She rides around the seedy underbelly of Los Angeles, hitting metal club after metal club. And while we hear she’s been doing good, Bliss doesn’t really leave much time to show her in her normal state. Instead, it immediately leaps into the downward spiral and demonstrates how fragile an addict’s psyche can be when subjected to their vices. A lot of the fun comes from watching Dezzy go insane for her art, but the film never really gives much time to like her as a character. The enjoyable component of Dezzy is the performance from Dora Madison, who is an utter delight when she really gets going.

Bliss is also a messy movie in its effects. Not messy in a bad way — messy in a splatter kind of way. Blood is spilled in a way that is only fitting for a film about an artist wrestling with covering a canvas. The painting she is making is almost as horrific and haunting as the blood-soaked rooms she inhabits. A literal metaphor of the sacrifice that can go into one’s art, Begos makes a meaningful justification for drenching entire sets in a crimson carnage — all in the name of metal.

Had Bliss given a little bit more time providing nuance to Dezzy as a main character, the turmoil she faces by the end would ultimately feel like it means something. It’s the one piece of the puzzle that doesn’t quite work, even if it ultimately doesn’t hurt the atmosphere. Its hectic pacing thrusts the audience into a world of excess, hinged upon a character’s dependency on narcotics and other vices. Bliss needs her to go through hell as quickly as possible to keep its breakneck pace. In the end, the result is a violent, provocative experience that leans into the psychedelic symptoms of drug use for a hyper-stylized nightmare. Bliss splits open arteries in the name of art, and it’s an absolute delight to see it aim for the rafters with such fervor.

65 Years Later: ‘Rear Window’ isn’t as Shadowy as it Seems

‘Homewrecker’ Wobbles Under a Shaky Foundation