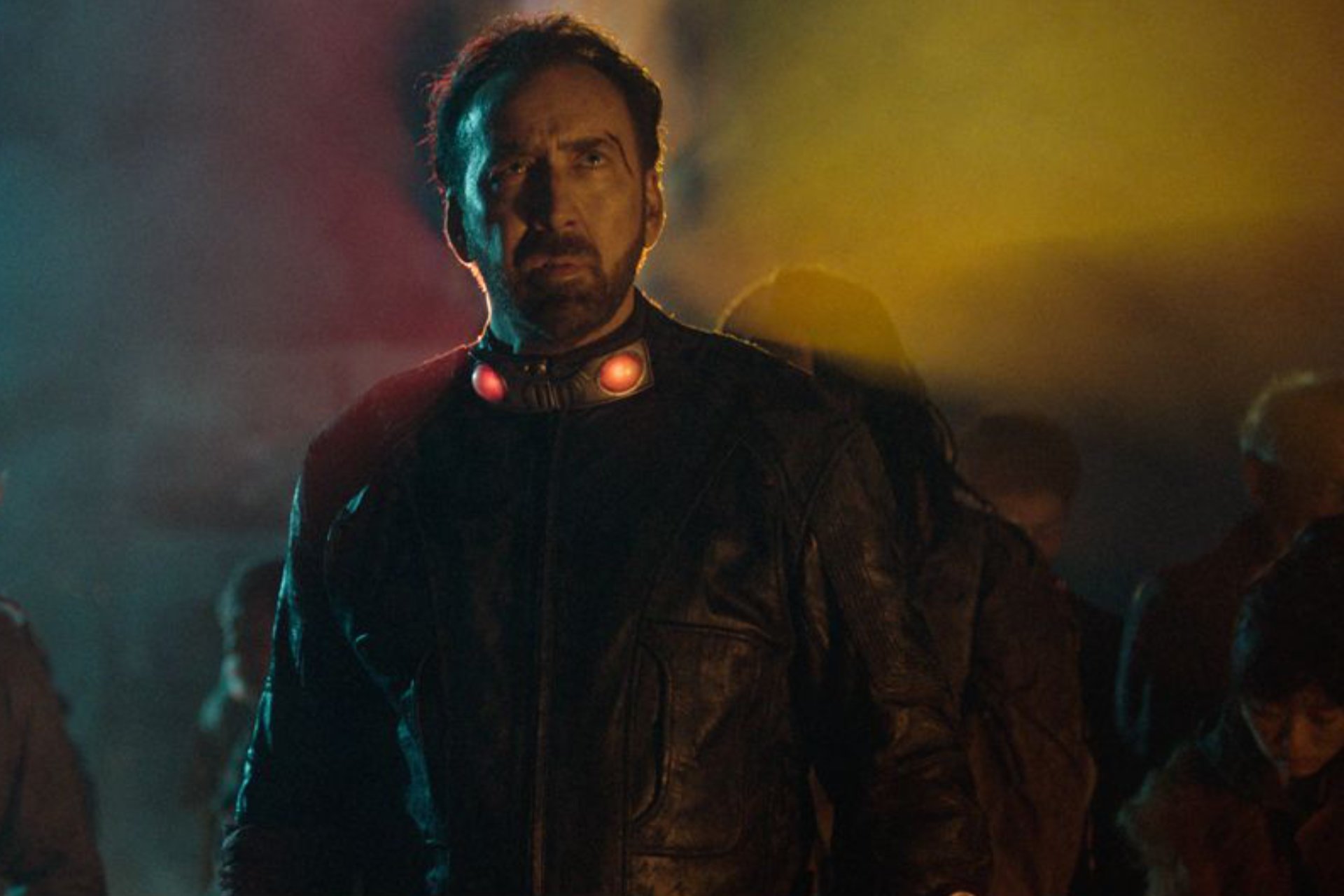 Fantasia 2021: Prisoners of the Ghostland

SIon Sono’s Prisoners of the Ghost Land is one of those movies that you can make sound good by describing individual elements of it. It’s got Nic Cage in a leather jumpsuit covered in bombs, Tak Sakaguchi as a mute samurai, atomic mutants and cowboys. Just on principle, the pairing of the over-the-top Japanese auteur and current-era Cage should pique the interest of anyone familiar with both. But Ghost Land doesn’t capitalize on any of the theoretically interesting or fun elements it has at its disposal, coasting through a meandering hero’s journey riff and delivering nothing of real interest besides scenery-chewing performances and a few very brief glimpses of decent action.

The film is set in a Sukiyaki-style mashup of the American West, Feudal Japan and a post-apocalyptic wasteland, where cowboys rub shoulders with Samurai and geisha, but modern cars and iPhones occasionally still appear. Cage plays “Hero”, a bank robber haunted by guilt over a robbery gone wrong tasked with retrieving a runaway girl by a corrupt local governor. He finds her quickly enough, but the two become trapped in “the Ghost Land”, a town seemingly isolated from the rest of the world by a gang of criminals mutated by atomic fallout. Oh, and to complicate matters, Cage is wired to explode if he doesn’t bring back the girl on time, raises a hand to her, or gets any funny ideas.

The above description may sound coherent, but Ghost Land presents its narrative in an unfocused, scattershot manner that defies the rational. The Ghost Land is apparently far from the Governor’s base, yet characters pass between the two in seconds on more than one occasion. We’re told the Ghost Land cannot be escaped due to the marauding mutants, but it’s never clear what makes them much of a threat. There’s also a giant clock in the center of town, its second hand being perpetually held back by a team of men straining at the end of a rope. If time moves forward, the town will explode, but again the why is vague at best. Things just seem to happen, not for any real reason, but just for the sake of happening, and to no real consequence. At one point, Cage has one of his testicles blown off, but it doesn’t really impact anything beyond knocking him out for a flashback sequence we could have gotten anyway. After being presented with a flashy car to save the girl in, Cage drives ten feet, jumps out, and leaves the town on a child’s bicycle instead, only to get chased down and forced to use the car. Very few of the film’s zanier moments really mean much or go anywhere, they just happen and the film moves on.

All of this could be fine under different circumstances. Plenty of movies have made it quite far just on style, crazy ideas, over-the-top performances, and atmosphere. But Prisoners of the Ghost Land, for all its wacky antics, just feels boring. None of the characters are in any way interesting or likeable and it’s not shot in any particularly dynamic or eye-catching ways. There are a few attempts at what may have been commentary about American imperialism, but they’re so unsubtle and inconsequential to the overall film that they don’t end up adding much. Cage bellows and glowers, certainly enthusiastic but never actually good. Sofia Boutella gets one brief action scene that makes it abundantly clear she should have been the lead, but otherwise spends much of the movie just standing around, her voice stolen by…..being partially turned into a mannequin? But then she got better? Again, it’s all very vague.

You could call Prisoners of the Ghost Land all style and no substance, but frankly, it doesn’t even have much style. Era mashups of this kind have been done already, and better, in films with more interesting visual styles and moods. The story wanders and isn’t ever interesting even when it has any momentum behind it. Crazy stuff happens, but none of it feels meaningful even within the literal events of the film itself, let alone subtextually or thematically. It’s the worst kind of “weird” movie, the kind that relies entirely on being weird to carve out an identity, without even anything as simple as strong formal elements or a particular mood to carry it any further. It’s bizarre and baffling, but also boring and meandering, and for a movie like this, from a director like Sono, that’s truly disappointing.