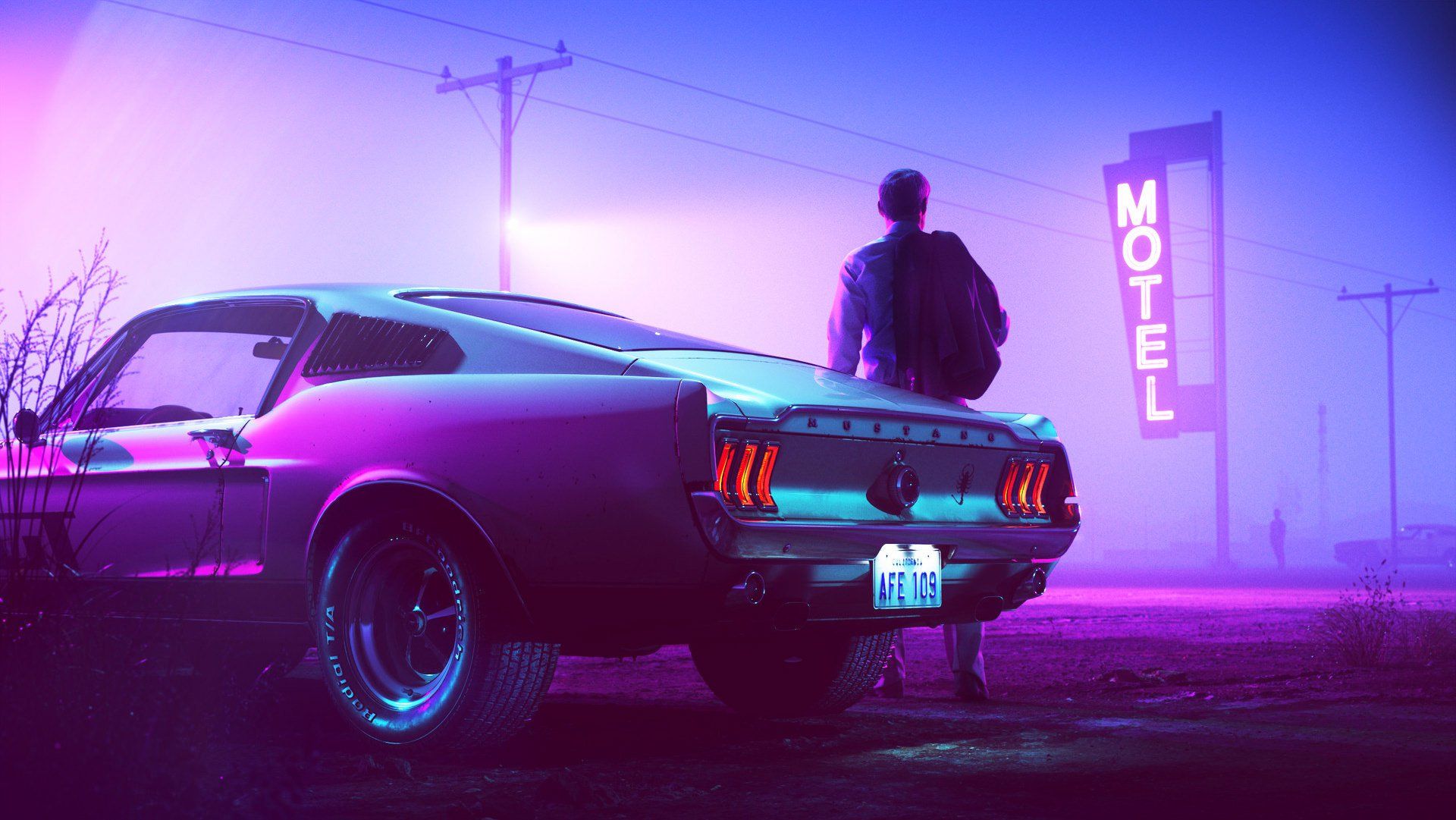 The Mythology and Symbolism of Drive

An analytical mind can, and will, find patterns behind everything, whether they are there or not. It is one of the many reasons why films and other forms of fiction are so often dissected and recast to reveal hidden meanings and deeper truths, by those who would think a little too much, a little too hard. Often this behavior could easily be mistaken for paranoia, were it not for the nature of the subject they unravel. Some movies are custom built to be broken apart, like the works of Kubrick or Malick, or Lynch. Numeracy and variety of interpretation are the reassuring signs that, no, you have not lost your mind. So it is always a little special when a film that on the surface bears no signs of ulterior motive becomes the subject of mass deconstruction by a plethora of critics, casuals, and the insane. Case in point would be Nicolas Winding Refn’s film, Drive.

What makes Drive such an interesting example is the manner in which the ‘mythology’ is built since it is ostensibly just a hardboiled crime thriller with noir trappings. On paper this is exactly what we are given; screenwriter Hossein Amini’s adaptation of James Sallis’ pot-boiler novel is an open canvas, one that tells a relatively simple story of a dark and mysterious getaway driver (and general badass) becoming embroiled in a crime story thanks to his affection for a woman. In the hands of Dane Nicolas Winding Refn, making his Hollywood bow, it becomes something else entirely. These sweeping alterations are not just limited to the 80s motifs and air of mysticism. As seen with the extraordinary Bronson and the savaged Only God Forgives, Refn is a director who doesn’t spin a yarn lightly.

Upon taking on the project, Refn took a gander at Amini’s screenplay and discovered something in the material not previously clear. This unique eye won Drive critical plaudits and cult status among fans, but also sent said adoring viewers down the proverbial rabbit hole in search of the truth. There are dozens of theories concerning the true meaning of the film, organized into a sliding scale of credibility and relevance. Some would say it is less an adaptation of Sallis’ book than it is an interpretation of the Scorpion and the Frog parable; it has also been suggested that the film’s central character is actually Carey Mulligan’s Irene, a personification of the pursuit of divinity; or maybe it is in fact a modern fairy tale searching for a pure hero. There is no doubting that this ambiguity is intentional. The only question concerns which one of these myriad crackpot ideas is actually true, if any.

That is the nature of Refn, as enigmatic and provocative as compatriot Lars Von Trier but with a far different sensibility. One only has to look at his approach to see that he intended to tell a far different story than that put forward by Amini. The bulk of the dialogue was shorn, with the tentative romance between Gosling’s nameless Driver and Irene noticeably culled, reducing the relationship to a series of meaningful quiet stares. Locale Los Angeles is shot like a magical kingdom, a sea of neon and low light. Narrative staples such as the convoluted criminal plot behind the action are treated with disinterest, hand-waved in favor of a different focus. Rather than use an action-driven soundtrack, Refn deploys a beautiful melancholy score by Cliff Martinez and positions soul-searching 80s-inspired pop. Unusual visual emphasis is placed on small details, such as Driver’s jacket and his self identification (“I drive”). An ethereal atmosphere is created and ruptured with stark, shocking fits of violence.

These mystical elements build towards an ambiguous whole, one that differentiates Drive from its countless predecessors; after all, it is far from an original story. What separates this particular incarnation is its atmosphere and nagging sense of recognition that refuses to fully focus. We can see that something is going on behind the plot, but can never quite put our finger on it. In this regard it seems to have more in common with Eyes Wide Shut than Walter Hill’s similarly titled The Driver, and should be treated as such. It becomes easier when you make this decision to travel a little too far down that hole pursuing something that is perhaps a little simpler than we realize. All of these aforementioned elements are small clues, not ciphers, and despite the otherworldly tone this is not a metaphysical realm.

Character study is an element that is sadly lost to many recent movies, but is a foundation of Refn’s work and can be found here keenly. It is not simply Gosling’s perfectly judged turn as Driver that gives the movie a personal touch, though his understanding of the role and ability to project while remaining silent should not be undervalued. It is no small wonder that this film altered his star persona dramatically, opening him up to a whole new market after previously stagnating in the mediocre foothills of romantic comedies and dramas. The manner in which he is filmed adds so much to the portrayal, while his murky background and persona hint at a back story packed to the rafter with angst, pain, and likely killing. You could make the argument that Drive is actually about a dangerous criminal trying, and failing, to overcome his demons and past and find something approaching happiness in his life.

This is where the Scorpion and Frog theory comes to the fore, particularly since its relevance has been confirmed by the director himself. The two tales seem to go hand in hand, and there are some cues that seem almost blunt to that point, namely Driver’s jacket depicting a scorpion on its back. The fable regards a scorpion requesting the services of a frog in order to cross a river, promising not to sting him in a truce. Halfway across, the scorpion does indeed attack, and, as they both drown, the frog wonders why. “It is my nature,” the scorpion states casually as it dies needlessly. In the case of Drive, the central character’s quandary is almost identical, the only question being whether he is the scorpion or the frog. He wears the Arachnida on his favored garment, suggesting he identifies with it, but due to its positioning, it suggests that he is perhaps the frog. The taut and duplicitous nature of his final showdown with Albert Brooks’ Bernie Ross seems to back this. He is stabbed, poisoned in effect, the only difference being that he manages to survive.

Given the manner in which Brooks and co-star Ron Perlman are treated, despite some colorful performances, it can be ascertained that Refn isn’t particularly interested in them. They are just plot points, as perfunctory as a suitcase of diamonds and as disposable as the nameless mooks who attempt to shotgun Driver at a cheap motel. Their irrelevance is as stark as Irene’s significance since she in turn is presented as an angel in the eye of the protagonist. Mulligan’s performance is open-ended due to her lack of dialogue, meaning we never truly know her or get a sense of personality beyond a pervasive sadness and motherly quality. The same applies to her son Benicio, who is the picture of innocence but little more. They are what lies on the other side of the river. Bernie Ross and Nino are not scorpions, however. The hinting and contrast presented throughout the film builds to one simple revelation: Driver is both the scorpion and the frog.

Although he is the hero, as one particular song on the soundtrack tells us, he is also the villain or at least its means to exist. The true bad guy is violence. We see its victims in the form of Bryan Cranston’s Shannon, witness its foreshadowing during Driver’s startling threat to an old client, and are finally introduced to it when he is attacked by gangsters after the typical ‘heist gone awry’. It is treated as a separate character rather than as an action. His interrogation of a criminal fixer at a strip club shows us that this violence is no stranger to the people who inhabit this shadowy world. The execution of Nino proves that it is an unstoppable force, enough so to bend the fabric of reality. And the famous elevator scene sees the hero become the villain for long enough to utterly shatter any hope of redemption or release. In one horrifying and heartbreaking sequence, we see every aspect to this deeply complex character and learn that inside is an antagonist who cannot be escaped.

The film’s ending may be as much of a cliché, with the hero riding off into the sunset alone and unhappy at the expense of potential new purpose, but it is not powered by an understanding that reprisals and retribution will follow. Driver leaves Irene and Benicio behind because he has finally understood that they will never be safe in his hands, since the violence that exists within him will one day, eventually, decide to sting; it is in his nature. Criminal conspiracies and west coast gangs provide the platform for this demonic influence to be exposed, and they will not be the last such enablers. It could be anything, big or small. The back story almost suggests that Driver is the villain of another story, and the film’s ultimate conclusion draws this clearly. It is an examination of the insidious threat of a violent nature and how it lays waste to all, whether or not the actions are deliberate.

Amusingly, such an interpretation is commonly dismissed for being too superficial and not going deep enough into the subject matter. It speaks volumes for the gravitas Drive’s symbolism provides that this can be claimed since as many would love to point out it is not a movie worthy of this type of cross-examination. At least, it shouldn’t be. Film scholars will continue to pour over the nature of an 80s influenced action noir as if it were the work of Ingmar Bergman, and naturally will find more and more differing bloodlines and meanings. And they are welcome to it since Refn’s movie is the picture-perfect example of hiding art within art. Just what that art truly represents, however, is up to you.

This has been a Strange Interpretation…

TIFF 2021: Saloum is an Exhilarating Genre Hybrid from Senegal