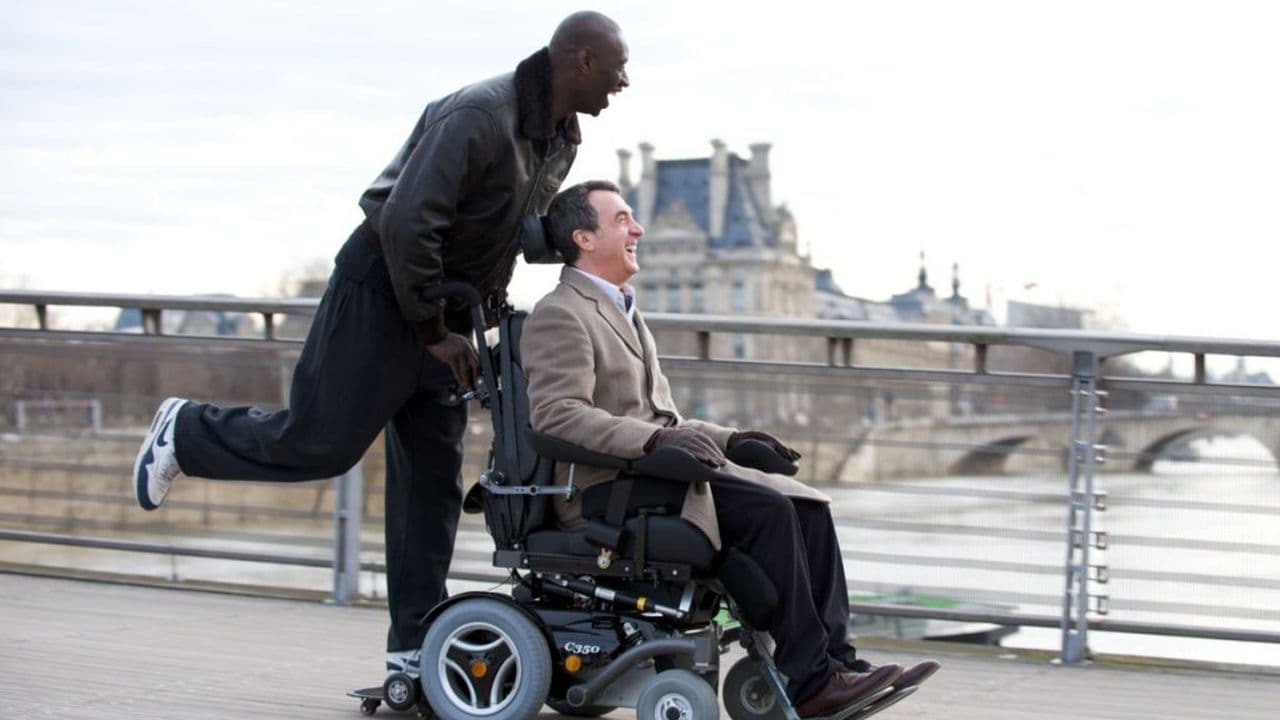 Fish out of water comedies seem to win a great many filmgoers each and every time a new one is released. The same may be argued about comedies that share the tales of bonding friendships between two individuals (or more, whatever the case may be) who, under any circumstances other than those dictated by the story, would never have found common ground. After all, everybody has a comfort zone, be it related to one’s profession, one’s social life, where one lives, etc. Creating bonds with people one hardly knows or with whom one believes to have nothing in common is difficult, hence the important addition of comedy into a movie to make the journey more palatable. As the saying goes, laughter is the best medicine, something the directing duo formed by Olivier Nakache and Éric Toledano take to heart in Intouchables.

A rich aristocrat named Philippe has his life spun around following a paragliding accident which leaves him in a quadriplegic state. His severe handicap means that he must rely on the daily, continuous assistance of others to accomplish the most seemingly trivial tasks, such as showering and even going to the bathroom. For that reason, he has a series of interviews, coordinated by his assistant Magalie (Audrey Fleurot), with a number of individuals from the health care sector in order to find the one candidate who will help ease his life just a little bit more. As happenstance would have it, one of those interviewees is one Driss (Omar Sy) a young adult from the Parisian projects, recently released from prison for some petty crimes, who was sent over to have an interview by a guidance counselor. Driss thinks nothing of the interview, proving to be brash, cocky, and totally uninterested in Philippe’s plight. For reasons that only Philippe himself understands, it is Drisswho, from among all the candidates, Philippe is most interested in. The young man’s lack of pity is precisely what he wants in his helper. Thus begins an unlikely pairing, one which will bring together two people who were worlds apart closer than they ever could have imagined possible.

Directors Nakache and Toledano just might have concocted one of the better films of this genre in recent memory. Sure enough, most comedies of this ilk find success in some fashion or another, whether at the box office, critically, or during their second lives on home video, but with so many to choose from, pinpointing those which genuinely stand out among the crowd is a delicate matter. The ingredients must be familiar for the audience to easily settle themselves into the picture, all the while providing enough fresh jokes and noteworthy characters, particularly among the two leads, for the film to produce any sort of lasting impact. It is with the second and third of these criteria where a movie like Intouchables doesn’t succumb to the pitfall of being yet another ‘run of the mill’ buddy comedy, instead, it is something special that people still talk about years later. Nakache and Toledano prove to be quite wise in how they approach the material, indeed playing on familiar ground but, contrary to what many other directors and writers might have done, they understand where exactly the strengths of the film lie, which encourages them to utilize said advantages to the fullest degree, with absolutely no let-up.

Unsurprisingly, a film like Intouchables requires some early scenes in which the two protagonists meet and get acquainted, albeit with some definite friction that keeps them apart for a short while longer. Subsequently, the character whom the audience at first believes to be the sillier, simpler or less refined of the two, in this case, Driss, must go through a learning process in order to adapt himself to his new surroundings and human connections. While Intouchables does not entirely eschew these episodes, it does get to the point reasonably quickly, allowing the vast majority of the story to concentrate fully on the blossoming friendship between Driss and Philippe. The story would in fact appear somewhat incomplete without the learning curve, but on the other hand, it is not a requirement to invest too much running time dwelling on the subject. Sooner rather than later Driss and Philippe are getting along rather well and bonding.

Yet another strength is in what the directors choose to do with these two interesting characters the rest of the way. The fear heading into Intouchables was that it would provide the audience with a series of ups and downs, each of the low points putting the protagonists’ new friendship to the test, only for it to be renewed and strengthened afterward. There is a hint that such occurrences may transpire when Philippe’s lawyer pays him a short visit, expressing some reservations about his client’s choice of a helper. This potentiality is quickly abandoned in favour of exploring where the commonalities between Driss and Philippe exist, where their common interests lie, and, more than anything else, how sometimes their differences in fact bring them closer together. The film will occasionally make reference to Philippe snotty teenage daughter who looks down on Driss with disdain, while during other sequences attempt callbacks to Driss’ difficult background and the neighbourhood where he lived, and it is safe to assume that such narrative strategies are a requirement in order to remind the audience that each of the characters has his own baggage to worry about, as is so often the case in a movie like this, but in this regard as well the directors only appear mildly concerned which such matters, and, once again, the movie benefits from its sharp focus.

What really helps sell Intouchables is its reliance on comedy. Granted, there are a few sequences that adds some layers of drama to the proceedings, lending the picture with a little bit of heavier gravitas, but they are very far and few between. The character relationships form organically and with the help of a lot of funny material. Some of it is indeed too facile, such as jokes about their preferred musical interests (hip hop and dance versus classical orchestral, obviously), but overall the dialogue exchanges hit a lot of strong notes. So far as this aspect of the picture is concerned, actor Omar Sy is without question the true star of the show. Outspoken, confident, and quite caring once he understands the gravity of Philippe’s circumstances, the character of Driss requires solid screen presence, of which Sy has in abundance. The actor can pull off just about any type of line to earn a laugh from the crowd, be it something a bit more on the crass side of things or terribly witty. François Cluzet is also provided some good lines but understandably plays second fiddle to Sy’s energetic representation of Omar (both individuals are based on real-life people). In essence, even though each offers performances that are quite far apart from one another in tone and style, the actors craft their respective characters with great care, which in turn helps the viewers themselves care all the more.

There really is no other to put than stating that Intouchables should leave a big smile on most people’s faces as the credits roll. The directors, probably aware that they treading familiar territory, even make deliberate attempts to concentrate on the essentials and all the advantages they possess (two incredibly charming leads and a funny script) and run off with just that. Even the ending feels just right, concluding this chapter of their lives on a very sweet note and leaving the window open for the audience to imagine what other little stories Omar and Philippe might have…and not necessarily a sequel.

Promising Young Woman: A Daring Subversion of the Revenge Film

Tony Parker: The Final Shot Explores the Career of the NBA’s Greatest Frenchman