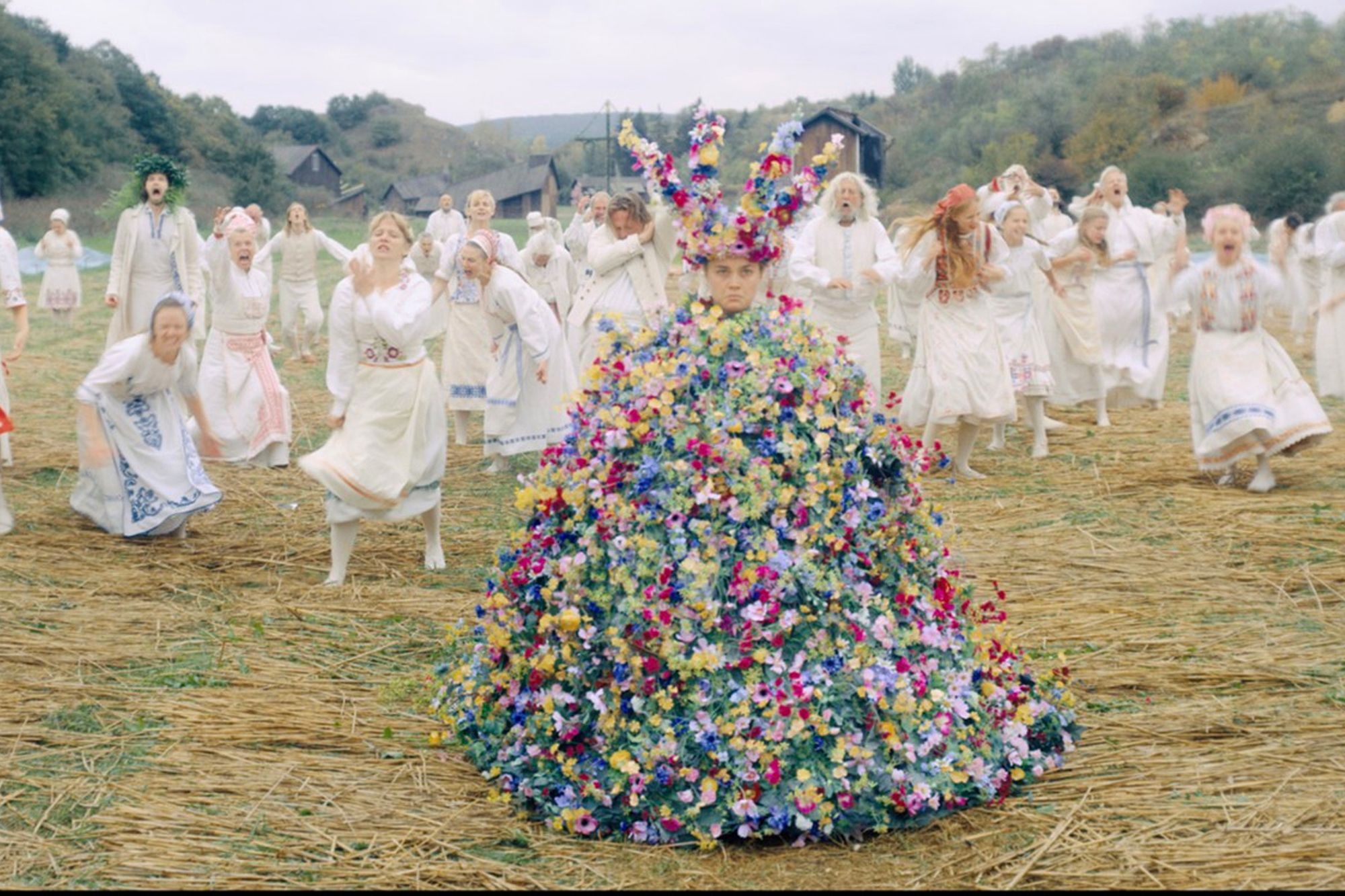 Ari Aster’s 2019 Midsommar is widely considered to be a polarizing film. Although some critics and audiences loved the movie, others felt there was a lot of buildup with very little payoff. At first, the premise for the movie seems fairly simple: Dani (Florence Pugh)—whose parents and sister recently died in a tragic murder-suicide at the opening of the movie—goes on vacation to Sweden with her boyfriend, Christian (Jack Reynor), and his friends to observe a midsummer ritual amongst the Hårga. Unfortunately for all but Dani, the commune is a cult that requires human sacrifices to celebrate the occasion, which only happens every 90 years. We then see Dani crowned the May Queen, she chooses Christian to be sacrificed (after he slept with another woman in the community), and the Hårga sew him into a bear carcass before playing him in a wooden hut next to his murdered friends and setting the building ablaze. It’s pretty gruesome, but surprisingly satisfying to watch.

But once you take a closer look at the narrative—which Aster has previously said was inspired by a bad breakup—it becomes a lot clearer that Midsommar is actually about a young woman surviving trauma, overcoming toxic relationships, finding an empowering community to belong too, as well as discovering herself. While that might sound like an unusually positive spin on a cult’s ritualistic sacrifice of a group of 20-somethings, it’s ultimately what’s at the heart of Dani’s narrative and what makes this movie an unapologetically feminist one.

Dani and Her Sister

Dani begins the movie trying to reach her sister, who she knows has bipolar disorder and appears to be having a traumatic episode. When she doesn’t get through, she calls Christian looking at first for a distraction and then for reassurance and validation that her concerns are legitimate. Instead, he belittles her over the phone in front of his friends and tells her that she’s overreacting to her sister. Additionally, he’s framing Dani’s anxieties as a product of her inability to set boundaries with her sister. When she says she’s worried about her sister, he sighs heavily and tells her, “I’m sure it’s fine. She does this every other day, Dani, and only because you let her.” Dani is painted as being in the wrong for caring about her sibling and for expressing this concern to Christian. She’s being made out as dramatic and like she’s jumping to conclusions, as well as being framed as a victim of her sister’s malice. Her sister, on the other hand, is being characterized as villainous, her legitimate mental health issues are reduced to cries for attention.

Dani has a gut instinct about her sister’s wellness and disagrees with Christian, but she apologizes for worrying and coming to him for support. “You are right, yeah, I know… No, I know, I know, I know. You’re right, you’re right. I just… I just needed to be reminded, thank you. I’m very lucky to have you.” Like countless women, she’s been taught that her concerns are illegitimate and that she’s being overly emotional. She’s not seen as empathetic or as a good sister by Christian, but rather she’s dramatic and needlessly anxious.

She vocalizes these doubts about her role in her relationship with her friend only a few moments later. She says that she doesn’t want to be clingy while ruminating about whether or not she already is. Even though her friend supports her and stresses the fact that her boyfriend should be there when she needs him, Dani can’t seem to shake the idea that she’s driving Christian away by being emotionally open. Even when her fears turn out to be warranted and Christian is shown physically comforting her, he’s quiet and reserved. Although he’s holding her and is upset by the situation, he’s not sharing in her pain or her grief.

Christian also tries to gaslight her when she discovers he’s going to Sweden for the Hårga’s midsummer festivities. While at a party, his friends Josh (William Jackson Harper) and Mark (Will Poulter) reveal that their mutual friend Pelle (Vilhelm Blomgren) has invited them to his home in Halsingland for the ritual. According to the group, they leave in two weeks and will be gone for over a month. Once they get home, Dani tries to confront him about not telling her, and he once again gaslights her into believing his false narrative (in which he argues he didn’t know he was going to go… despite having already bought a ticket) and into ignoring her feelings on the issue. When he says “sorry” to her dismissively, he tries to frame that as a sincere apology and then threatens to leave her apartment when she challenges him about it. He guilts her to the point where she not only says that she doesn’t need an apology, but that she ends up apologizing to him. After threatening to leave her a second time and claiming she’s attacking him, Dani says, “Well, then I’m sorry. I’m… I just got confused. I’m sorry.” He’s clearly in the wrong, yet he threatens to withhold intimacy from her until she concedes that she’s the wrong one.

Dani is repeatedly being punished throughout the beginning of Midsommar for having emotional needs and expressing them to Christian. Even his friends, except Pelle, are rude and dismissive of her. Mark routinely tries to convince Christian to leave Dani and get visibly frustrated when she comes along to Sweden with them. Jason refuses to warn Dani of the double suicide they’re about to watch at the Hårga’s behest, even though he’s there to study the ritual more closely for his thesis and is aware of the trauma Dani has already lived through.

Only Pele is kind to her because he’s a member of the Hårga and because he lost both of his parents in a fire when he was a young boy. He’s the only one to remember Dani’s birthday (Christian even forgets it), the only one who actively encourages her to participate in the festivities taking place in the community (like the competition to choose the festival’s May Queen), and the only member of Christian’s friend group who empathizes with Dani’s resounding pain throughout the movie.

The Hårga as a Foil

The Hårga also act as a perfect foil to Christian and his group as they’re depicted as emotional, feeling, deeply empathetic people. During the ritual suicide that we see performed by two elderly members of the cult, the rest of the community are shown crying and screaming and emulating the pain felt by the sacrifices. When Dani is dancing around the maypole with the other young women of the community, they understand each other even though they can’t speak English and she can’t speak Swedish. When she wins the title of May Queen, they consider her to be part of their family, not just the community. When she’s taken away to bless the soil and she asks if Christian can come with her, she’s told by the leader that “The Queen must ride alone.” She’s being empowered to find her own path in life and to let go of what no longer serves her.

The Hårga also share in Dani’s trauma. When she sees Christian having sex with another woman, the group of women in her company take her away to her bed. They brush the hair off her face and hold her in a gesture of love and reassurance. When she collapses on the floor, sobbing, the women hold her and sob with her. They look into her eyes, match her breathing, and feel everything Dani feels. They’re not passively sorry for her relationship, they’re actively mourning it with her. The women form a circle, all holding onto each other, and they experience a profound moment of sadness with Dani.

Dani and Her Final Choice

While this might make it seem like Dani is a character that just happens to be in a feminist narrative, her choice at the end of the film solidifies her iconic status with audiences. Dani, as the May Queen, is given a selection of sacrifices to choose from. Although Christian is among them, she could have chosen to save his life and nominate another man from the community. However, Dani decides to select her boyfriend and offer him up to the ritual bonfire at the end of the film. The audience witnesses as Dani cries and then smiles as she watches Christian (and his already-dead group of friends) become engulfed in the flames, the Hårga screaming around her as they empathize with the men burning inside. By letting him die, Dani is choosing to let go of her past trauma and a relationship that only served to oppress her. She’s making the conscious choice to let patriarchy in her life die, to reclaim her future, and she finally allows herself to accept that she’s finally somewhere she belongs. She’s finally part of a community that supports her choices, validates her emotions, and that accepts her for who she is without trying to make her into someone she isn’t.

While Dani may have begun her journey in an emotionally stunted relationship with a man who emotionally manipulated her, she ended it with a new family, a new appreciation for her strength and resilience, and at a place where she can finally express how she feels and know it will be met with love and empathetic affirmations. And if emotional vulnerability isn’t feminist as f*ck, then nothing is.