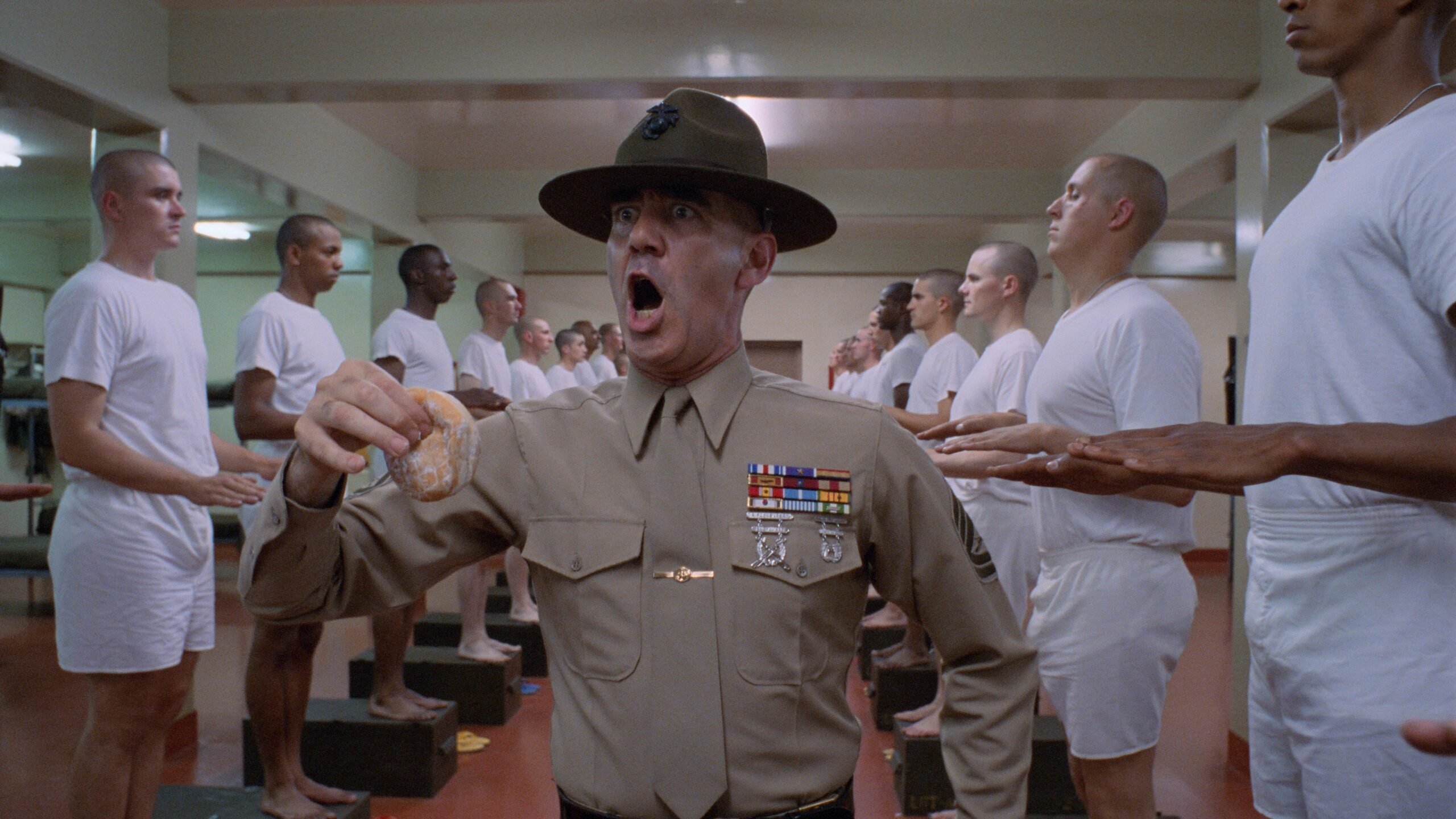 Hartman, through a series of impressively sexual, scatological, vicious, and vulgar insults, rules over the young recruits with an iron fist, and his strongest contempt is reserved for Private Pyle (Vincent D’Onofrio.) Overweight and slow-witted, he comes in for the nastiest insults of all.

Ermey, an actual Vietnam-era drill sergeant, was famously first hired as a technical adviser on the film, and eventually cast in the part. It’s a transcendent performance, especially coming from a non-actor.

We’re led to believe that Pyle has successfully been turned from a buffoon into a killing machine, as it intended. But it turns out his killing started a little early- amidst a breakdown, he guns down both the drill sergeant and himself. But not before executing the famous “Kubrick stare.”

The film’s second half is less remembered, but nearly as strong, even though two main actors aren’t part of it.

Joker (Matthew Modine), also featured in the first section, plays a military journalist, assigned to write puff pieces about the war. The intellectual of the bunch, Joker is constantly cracking jokes, sporting a peace button, and getting into philosophical discussions.

He’s the kind of guy who wears the peace button and “Born to Kill” helmet, and describes it as “I think I was trying to suggest something about the duality of man, sir.” A similar dynamic, as I noted at the time, was present when John Kerry unsuccessfully ran for president in 2004, while simultaneously touting both his war service and his antiwar activism.

Soon, we’re right in the Tet Offensive, and we’re introduced to such characters as  Doorgunner (Tim Colceri), who gleefully defends killing women or children. There’s also a war sequence set, incongruously but beautifully, to the Trashmen’s “Surfing Bird.”

Full Metal Jacket opened in wide release in July of 1987, 35 years ago. It was Kubrick’s second-to-last film, and the last released while Kubrick was alive (he died in 1999, during post-production on Eyes Wide Shut.)

Based on Gustav Hasford’s novel “The Short-Timers,” the film was written by Kubrick, Hasford, and Michael Herr, whose novel, “Dispatches,” was the source of the basic training part. The film didn’t go to any jungle countries, and was shot in England; Kubrick showed his gift with the use of soundstages, which also allowed him to successfully re-create New York City in England for Eyes Wide Shut.

What’s the lesson of the film’s first section? That not everybody is cut out for military service? That Pyle should’ve waited until he got to Southeast Asia before he started shooting? That Pyle’s murders aren’t all that different from the nature of war itself? (It’s worth noting that there was no known real-life case of a private at boot camp gunning down his own drill sergeant.)

These, and others, are things that fans of the film have been arguing about since 1987. It’s a film that was released a little over a decade after the end of the war, but Full Metal Jacket slots in the “big five” of the greatest Vietnam War movies, along with Apocalypse Now, The Deer Hunter, Platoon, and Born on the Fourth of July.

Just as another 1987 movie, Wall Street, was made as a left-wing critique of 1980s greed but was nevertheless embraced by finance types, and even encouraged many of them to pursue such careers, Full Metal Jacket was pretty clearly intended as an antiwar movie, meant to make war itself, and especially the basic training process, look horrific.

However, Marines love the movie, and many who have watched it over the years have seen something completely different in it. The prevalent Facebook Dad political worldview, which believes first and forecast that kids today are too soft and need some discipline, has likely clapped along with Hartman throughout the film’s first half.

Full Metal Jacket is streaming on Netflix, where fans of Stranger Things have an opportunity to see a very different side of Matthew Modine.

The Spy Who Loved Me: Roger Moore’s Rough and Tough Bond