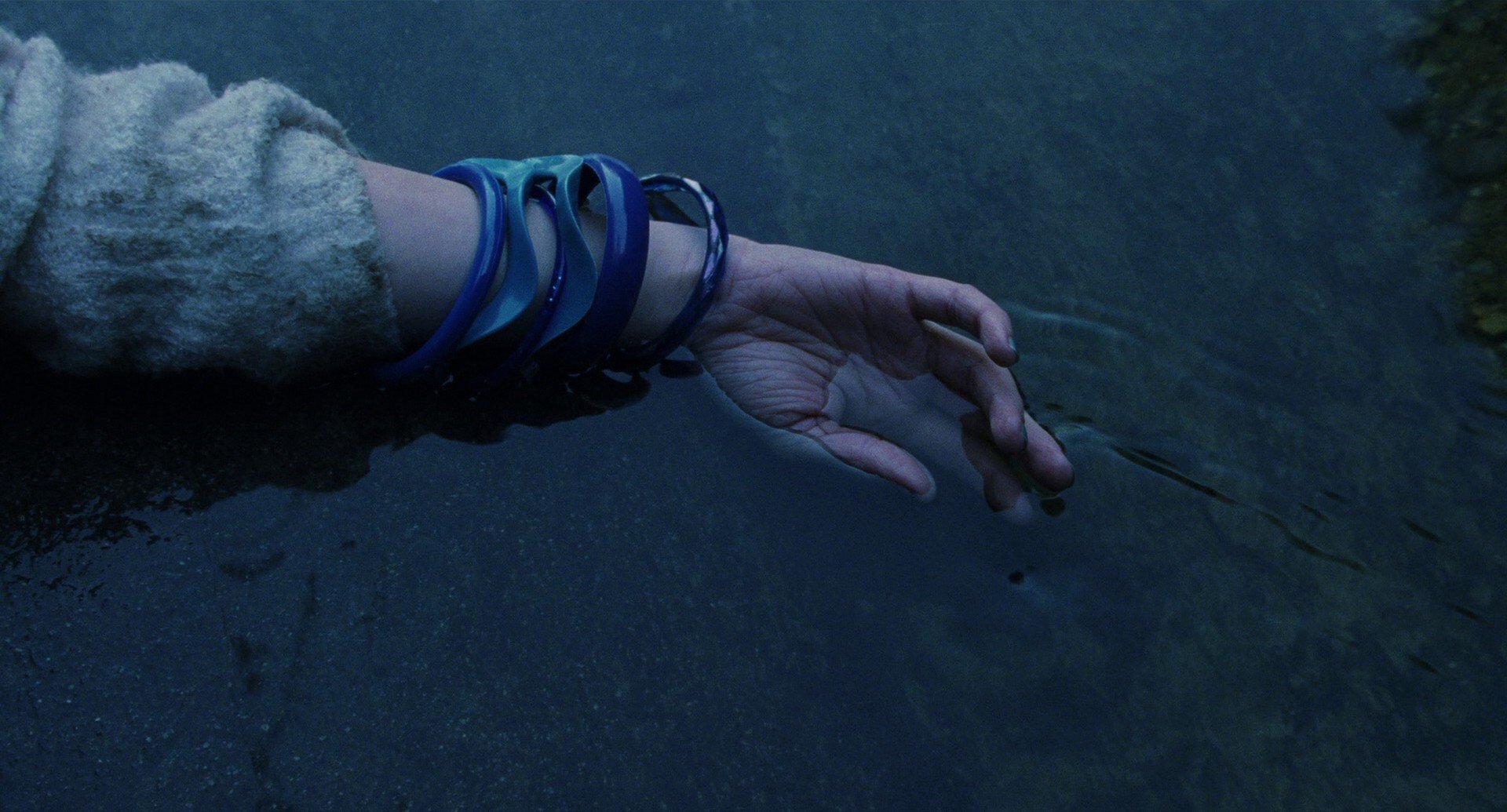 It speaks to a director’s qualities as a storyteller that even before his or her third film is released, their every word and hint and what may be to come has film aficionados exuberant with gleeful anticipation. Rian Johnson was one such director at the start of his career. His debut effort, Brick, is something very special to behold, a picture with characters, a plot, and dialogue that would fit perfectly in any film noir entry, only that Johnson sets the story in a modern-day American high school.

Brendan (Joseph Gordon-Levitt, sporting a mopy, over the eyes hairdo) is something of a loner at school, a recluse whose outlook on life is bleak. He does not smile much, tells few jokes, has few friends, and things have only gotten worse the morning he discovers the lifeless body of his former girlfriend (Emily De Javin), stretched out at the entry point of an underground tunnel. With assistance from one of his few allies, a kid nicknamed Brain (Matt O’Leary), Brendan sets out the unravel the mystery behind her disappearance a few days ago and subsequent death. His journey takes him into many circles operating both at and outside of school, such as drama students like Kara (Meagan Good) with dark connections, the wealthier elite kids like Laura (Nora Zehetner) who seem to have connections with just about everybody, loser jocks like ‘Tug’ (Noah Fleiss) who operate with their fists rather than their brains, and the elusive figure known as The Pin, who may or may not actually exist and who may or may not be dealing drugs. Each one apparently was involved with Emily’s ultimate fate in some fashion or another. Who is genuinely helping Brendan make sense of the nightmare and who is leading him down a dark path from which there is no return, not even the protagonist himself is sure of at first. His resolute attitude and quick wit are all the weapons he needs to face the tide of sad revelations.

There are only so many films that attempt to pull off the sort of trick director Rian Johnson aims for with Brick. A cursory examination can lead one to conclude that this first film is little more than yet another ‘high concept’ picture. The problem with high concept pictures is that, all too often, they have precious little to offer in terms of content once the novelty of the concept in question grows stale. They are about the concept and nothing more. Where Brick differs is in the world-building process and how it goes about it. With a fully formed world comes a story, and with a story, one needs top-level actors to deliver the sort of dialogue Johnson wrote in his screenplay, which is reminiscent of the sort of speech uttered by characters in a film of this ilk all those decades ago in the 40s and 50s, yet which simultaneously feels tailored to the world of this singular film, like a perfectly molded single entity, not necessarily a copy and paste job-based on old expressions heard before.

The idea of setting a noir-heavy story within the confines of high school life is a very high concept indeed, but Johnson proves capable of making the film much more than a piece of curious art. Brendan, as fatalistic and contradictorily steadfast in his mission much like the detectives of old, is a three-dimensional being. Had he merely been there to serve as a figure who could spout fancy, unrealistic lines (Joseph-Gordon Levitt is pretty good at that, which is a starting point for bringing Brendan to life), then Brick would struggle to ever evolve past the point of ‘high concept’ platform. There are a handful of moments when Brendan’s emotions come through, be it in very passionate ways when someone goes a step too far in bad-mouthing his former gal Emily, or in intimate, quiet, and heartfelt moments, such as in a flashback scene when Brendan, snooping around in the hopes of learning what Emily is up to, discovers her hugging a punk rocker kid whom she has apparently fallen for. Brendan, recognizing that he has lost his girl, can do nothing more than hang his head for a moment in defeat and then walkway, leaving the two newly acquainted lovers to their private moment. Joseph-Gordon Levitt gives a nuanced performance, one where the placid exterior is occasionally interrupted by, what else, that wonderful little state of being known as humanity. As the discoveries pile up, signaling in some unsubtle ways that Brendan is venturing into territory far more dangerous than he originally bargained for, the viewer wants to see him succeed. It grows ever more likely that the truth behind Emily’s demise shall not be a pleasant one, if only for the sake of seeing Brendan walk away, preferably on his own two feet, at peace with the entire truth.

There is a handful of cast members who shine, giving spirited performances that accentuate the qualities of their respective roles. Noah Fleiss is wonderful as the oaf Tug who slowly sheds his more violent exterior to let Brendan in on some private feelings. Matt O’Leary as Brain is working with less nuance but makes for a highly amusing sidekick. Lukas Haas makes a brief if impressionable appearance as a heavy. The lone performance who, for reasons this reviewer is still incapable of pinpointing exactly, does not execute on the same level as her co-star is Nora Zehetner. She is lovely to look at and certainly walks like a femme fatale, but in some ways, her demeanour is too much like that of an adult. Most of the other characters in the film are still teenagers, with the film deliberately reminding the viewer of that reality. Nora, in contrast, is clearly playing a classic femme fatale as an adult. She seems a little too cool, a little too mature in her sexiness. If one takes her characters and sets in a film where everybody else is an adult, it should work wonders, yet in Brick, she seems out of place at times.

Getting back to the setting, that is, the dark side of high school life, Rian Johnson deserves a pat on the back for making connections between two universes which serve a brilliant purpose when paired together. In high school, everything felt like a big deal. When things did not go as planned, such as breakups, or embarrassing secrets set loose upon the many gossipers, it often seems like the end of the world. We felt like grown-ups at times even though nothing could be further from the truth. Director Johnson takes that pervading sentiment and thrusts said high schoolers into a truly adult world story about drug dealing and murders. Instead of racking their brains over things which only a couple of years down the road will be remembered as trivial, these students are actually confronted and in some cases willingly get involved in terrible things often found in a noir picture which brings upon real consequences. It is a clever idea and the fusion pays off very some handsome dividends.

On a final note, composer Nathan Johnson deserves credit for an incredibly emotional and at times downright haunting score. The main theme consists of only a few notes, but they are played with a variety of different instruments at various moments in the picture, thus help to set a specific tone for each. It is widely known however that traditional instruments were not the only tools used to create the music for the film. Kitchen utensils, filing cabinets, wine-o-phone were but some of the unorthodox objects used to give Brick its individuality.

The last few decades have not witnessed many filmmakers find inspiration from film noir. Part of that may be explained by the fact that traditionally, such films are not big winners at the theatre. They do not garner wide audiences, save perhaps a few glowing exceptions. Brick was no exception, earning the adoration of film critics and those among us to search a little further to discover good movies, but that makes up but a tiny portion of the movie-going public. Rian Johnson uses an old formula and adapts it brilliantly to the modern high school setting. Do not let the fancy talking fool you. Brick is the real deal.

Deadline at Dawn is Widely Unfocused

High Sierra is Essential Viewing for Fans of Film Noir