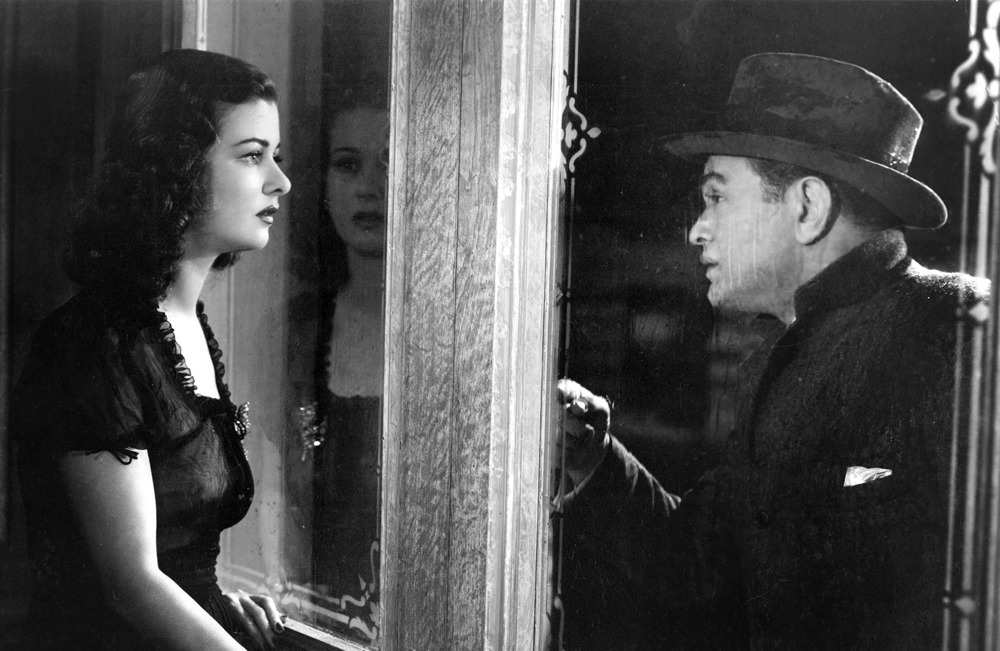 Friday Film Noir: The Woman in the Window

Richard Wanley (Edward G. Robinson) is an assistant professor of psychology at a local university. While the academic’s family is away for the summer, he spends his evenings at a gentlemen’s club with fellow intellectuals, among them Dist. Atty. Frank Lalor (Raymond Massey). Just next door to the club is an art shop where, set beside the window for all to see, a portrait of a beautiful woman sits, catching Richard’s attention. Happenstance has it that the subject, Alice Reed (Joan Bennett), passes by one night and, flattered by Richard’s admiration, invites him over to view other sketches. Everything is quite innocent until a middle-aged man, an acquaintance of Alice’s, storms into the apartment and attacks Richard out of jealousy. The professor has no other choice but to retaliate and stabs his assailant to death with a pair of scissors. Now, two normal people find themselves with a cadaver to dispose of and the authorities on their tail, all because Richard was forced to act in self-defense.

This last aspect of the crime is of utmost importance; at least, the film communicates as much in the opening scene wherein Richard lectures a class about people’s perception of murderers. The scene lasts barely half a minute and does not seem to play too significant a role in the grander scheme of the plot other than to reassure the viewer that even something as vile as killing can be done for the right reasons. A murderer is frowned upon by the public if the deed is done for gain, but when death results out of another person’s attempt at self-preservation, it is looked upon differently, with a level of understanding. The irony of having this brief scene play at the start of the movie is that Richard and Alice soon learn that even when murder is committed to saving one’s life, the aftermath is no less dangerous and stressful than is they had committed the act out of pure malice. The film makes it quite clear that Richard’s attacker would have strangled every breath of life out of him had he not clamored Alice to reach for the pair of scissors lying around. Murder is still murder, however, and it can always get you into trouble.

The problem is that, according to Alice, no one knew of her occasional soirées with this mysterious figure. She did not even come to learn his name. When Richard learns from his friend Frank Lalor that a high-ranking Washington diplomat has suddenly disappeared while in town, Richard is struck by the fact that if the authorities ever trace the crime back to him, there is no one to depend on as a witness. Complicating matters further is that this man, infamous for his temper, hired a bodyguard (Dan Duryea) to follow him around out of paranoia. Worse still, the bodyguard has a track record of blackmail, so if he decides to show up one day, Richard and Alice could be in real trouble.

All of this is set up with exquisite precision by Fritz Lang, a director who can send his characters into a blender of trouble like no other. Lang keeps things moving along briskly, providing new little twists and turns along the way to keep the pressure mounting onto Richard and Alice. The plot almost becomes a game at one point, with the two protagonists as participants who must counter-maneuver whenever law enforcement or any other party crawls closer to discovering their dark secret. The film’s most excruciating and amusing scene is when Frank invites Richard as an observer to the location where the body was found, also known as the place where Richard foolishly dumped the corpse. Whether due to inexperience or his inability with handling so much pressure, Richard constantly says or performs small things that suggest he knows more than he probably should. His friend thinks nothing of it at the time, but the viewer’s resistance to tension is tested more than once.

Among The Woman in the Window’s most interesting qualities is the fact that neither Richard nor Alice is particularly good at covering up such a crime. Why should they be? They have no experience in the matter. In the immediate aftermath, as the two discuss what has to be done, Richard is more composed, relying on information about murder cover-ups he most likely learned through Frank. At first, it looks as though he knows what he’s doing but then a series of small errors, both of his own doing and caused by matters beyond his control, demonstrate that he really is far over his head. Alice fares no better, playing things too cool until the nefarious bodyguard shows up one night at her home and demands a ransom payment if he is to keep his mouth shut.

That bodyguard’s inclusion thickens their predicament considerably. Suddenly there is a cutthroat pawn who, according to Richard, will not let up even if they choose to cough up the five grand he demands. The professor explains that neither paying him nor alerting the police of his harassment will help them in any fashion, leaving them the option of killing him. By now, things are spinning out of control, complicated in ways Richard and Alice have no experience with. It is refreshing to see a film in which the characters acknowledge how maddeningly difficult it can be to get away with a crime. The Woman in the Window excels at encouraging the viewer to empathize with the ill-fated duo, reaffirming Richard’s lecture at the start of the picture and getting the viewer to relate to someone who commits a murder to save. That said, the film throws odd curveballs to show Richard under different light, such as his admission that he holds no feelings towards the man he just killed and his suggestion that the bodyguard be poisoned, revelations that speak to the darkness that lies in even the most seemingly docile and lucid of individuals.

It goes without saying that Robinson and Bennett do more than just fine with their parts, dependable as ever under Lang’s direction. Regarding Dan Duryea, the more films he appears in, the more welcoming his presence becomes. His is not a name that comes up in discussions of Lang’s oeuvre or noir in general, but after watching this movie and Scarlet Street (and Roy William Neill’s Black Angel), Duryea looks more like film noir’s secret weapon. He is ridiculously effective at playing the ne’er-do-well, the trickster. One can liken him to The Joker: he constantly has a large grin on his face but everyone in the room knows he means nothing but trouble. Simply put, Duryea is a shining example of how to play a Grade-A asshole.

The Woman in the Window can be added to the catalogue of splendid films Fritz Lang directed during his Stateside career. It incrementally raises the stakes in a logical fashion, tightening tension’s noose on the protagonists and the viewer until…well, it would be unwise to reveal the outcome. While not as emotionally devastating as Scarlet Street, The Woman in the Window is still a must-see for Lang fans.

The Maltese Falcon is indeed a Treasure to be Seen!

The Lady from Shanghai Suffers from Studio Tampering of its Time