Often when reviewing movies, many critics (myself included) love to offer up comparisons to other films. It’s only natural, as sometimes it’s easier to describe the movie you are reviewing to the reader while citing other works. German writer/director Tilman Singer’s Luz, however, is one of those rare films that makes it difficult to do so. I can’t help but think Luz is in a class of its own.

That said, Luz does feel like a throwback to arthouse cinema of the 1970s and early sci-fi thrillers of the 1980s, but only because the movie itself takes place in the early 80s and features an eerie electronic score courtesy of Simon Waskow (not to mention it was also shot in widescreen 16mm stock, a format barely used in present day). Come to think of it, as I write this I can’t help but think of early David Cronenberg, and not just because Luz offers moments of sexual body horror, but because of the way the characters interact with each other (their body language, chemistry, and delivery of dialogue, for example). There’s something truly hypnotic about the way the film unravels; it’s a horror film of unusual substance and vision, and despite all this name dropping, Luz looks, sounds, and feels like a movie made decades ago — not a movie made by a filmmaker imitating the films he watched growing up. 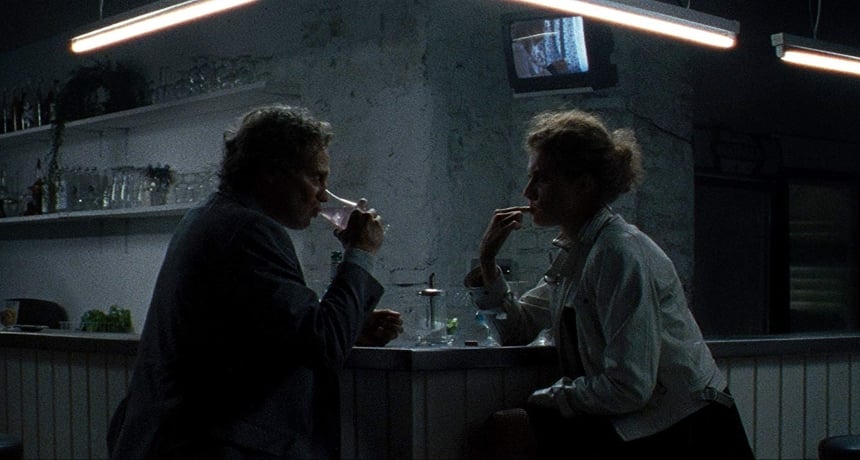 I use the word hypnotic because hypnosis plays a major part of the plot, as the second half of Luz sees well-renowned psychologist Dr. Rossini (Jan Bluthardt) put the catatonic titular character (a taxi driver) under hypnosis in hopes that she will remember how she crashed her cab the night before. From here, the story unfolds within a small municipal boardroom, as Rossini interviews Luz (Luana Velis) under the observation of two detectives. It is here that the film transitions into what is best described as a theatrical piece, with the actors left to enact the tragic events of her past.

The fun of watching Luz is admiring how Tilman and his very talented team rely on old tricks of the trade.

Because a good chunk of the film’s lean 70 minutes is spent in one room of a police headquarters, director Tilman Singer must find the most creative ways to bring his small set to life — and boy does he succeed! Using applied sound effects, precision cutting, plenty of close-ups, lengthy and unbroken wide-angle tracking shots, and Paul Faltz’s gorgeous lighting, the cast is left to relive the car accident and other events in Luz’s life with nothing but a few props and some carefully orchestrated staging. Sitting in a chair in the middle of the room, actress Launa Velis mimics all the motions of operating a taxi, from stepping on the gas pedal to gripping the clutch, from rolling down her window to putting on the brakes. Next to her is an empty chair (the passenger seat), while behind her there are two chairs (the backseat of the cab), and in front of her is a fake windshield mirror. Throughout the interrogation, we hear the sounds of the city as she drives around in her imaginary cab, along with the voices of the people she encountered along the way. If all this sounds boring to you, trust me — it’s not.

Luz is directed with such care and such precision, that what could have been a simple chamber drama ends up being one of the best-directed and best-edited films I’ve seen all year. It really is an incredible achievement given how much mileage the cast and crew get out of a small budget. Even more impressive is that from my understanding, Luz began as a student film, and was Tilman’s thesis project while attending the Academy of Media Arts Cologne. Not bad for a first feature!

The story of Luz is a relatively simple one (even if it is told out of sequence, using a series of vignettes), but if you’re open to films that twist the conventions and bend the language of image and sound in creative new ways, you won’t want to miss this. Tilman Singer’s take on demonic possession is a breath of fresh air, and Luz is a real treat for fans of vintage horror cinema (in particular, the experimental Giallo genre). The fun of watching Luz is admiring how Tilman and his very talented team rely on old tricks of the trade used before the age of computers and digital effects. Luz is brilliantly directed and features a terrific performance from Julia Riedler, Luana Velis, and Johannes Benecke. I doubt I’ll see a better indie film this year.

Editor’s Note: This review was originally published on August 1, 2018 for our coverage of the Fantasia Film Festival.

Fantasia 2019: ‘Door Lock’ Delivers the Goods Within the Genre’s Confines