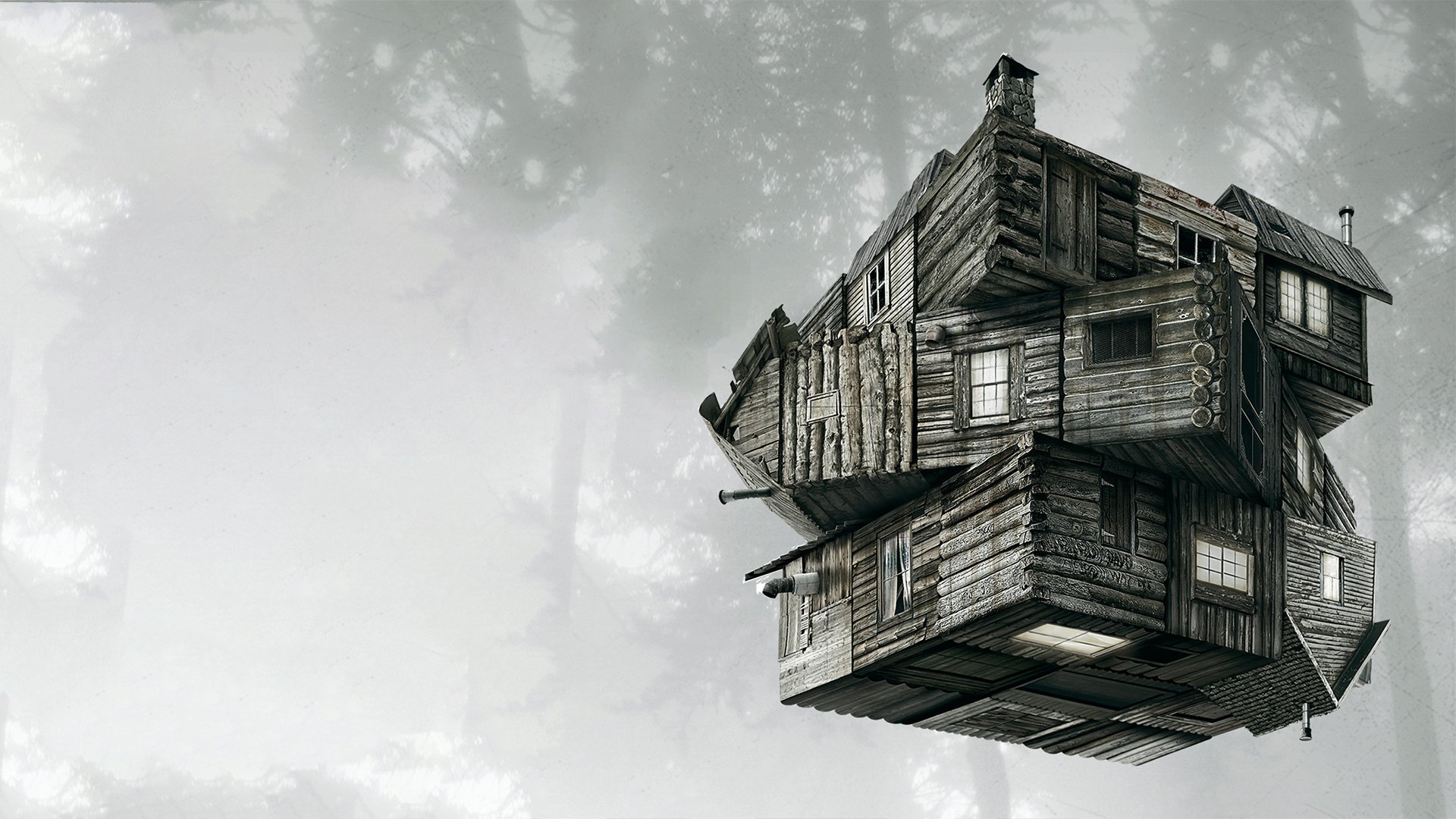 The Cabin in the Woods: 10 Years Later

After seeing a trailer or TV spot for Cabin in the Woods, viewers could be forgiven for thinking they’ve wandered into the wrong movie, based on the way the film begins. A couple of bored office workers riding a motorized vehicle through an underground base while cracking jokes doesn’t exactly scream horror.

What does scream, however, is the soundtrack, as the title card for Cabin in the Woods pops up out of nowhere, and a horrific screech rips through the calm scene as if we’ve just had our first kill in a slasher flick.

It’s been 10 years since Joss Whedon and Drew Goddard’s everything-and-the-kitchen-sink take on horror movie tropes, Cabin in the Woods, first rolled into theaters, and none of its charms has been diminished in the interim. The genre send-up on everything from creature features to ghost stories involves (unsurprisingly) some teenagers trapped at an isolated lodge in the middle of the woods. However, what’s different about Cabin‘s take on this long-standing trope is that we’re also introduced to an underground realm of office workers who are responsible for the horrors that are about to be enacted.

The basic notion to tackle and examine terror tropes through a horror-comedy lens is not dissimilar to Wes Craven’s Scream series in its mission statement, but the strategies utilized by Whedon and Goddard are much different in their execution. While Scream and its sequels set out primarily to dissect slasher flicks, Cabin in the Woods tackles the entire genre of horror in all of its grim and gruesome glory. Everything from zombies to giant snakes to mermen (!?!) get their due. That’s not all, however, because generalized horror monsters are just the beginning of what this film attempts to explore.

Amid the underground house of horrors that supplies the titular cabin with its macabre inhabitants are obvious stand-ins for the villains of films like Hellraiser, The Strangers, The Ring, It, The Evil Dead, and many, many more. In fact, there are literally dozens of monsters, killers, and creeps featured in Cabin in the Woods‘ meager 95-minute runtime. In less capable hands, a film this stuffed with lore might be a bit of a mess, but with the folks behind shows like Lost and Buffy the Vampire Slayer firmly at the helm, even a movie this audacious and seemingly over-stuffed is able to soar under the weight of its ridiculous premise, rather than being crushed by it.

Part of this success comes with the fact that the more extravagant elements are kept on the back burner for the first half, with only minor hints here and there as to the scope and size of what happens to reside below the cabin. As the five teens enter a creepy cellar early on — a cellar populated with an endless supply of creepy objects — they are “allowed” to choose the method of their destruction by selecting and exploring the object of their choice. Scenes like this one are demonstrative of the love that Whedon and Goddard have for this genre and its trappings, as eagle-eyed viewers will spot a multitude of references to horror franchises both old and new.

This creepy — if somewhat silly — sequence is juxtaposed with scenes of the staff in the facility below the cabin making bets about who — or what — the teens will summon, while speculating on the fates of other similar rituals being undertaken all over the world.

Rituals? Well, yeah. You see, it turns out this operation is only one in a global string of blood sacrifices being enacted by similar groups in countries like Japan and Sweden. Unfortunately, one by one, these sacrifice attempts have failed, leaving the American one, which sits at the center of Cabin in the Woods, as the only hope for humanity to survive the rumblings of a dark, sleeping god who slumbers far below.

Of course, at this point in the film, the sacrificial teens are completely unaware of any of this, and the same goes for the audience. All we know is that after an unfortunate bit of Latin reading from the Buckner family journal by the protagonist, Dana, the re-animated, remnants of the zombie-hillbilly Buckners have returned to murder their summoners. As the sexy cheerleader stand-in, Jules, and comic relief stoner Marty (literally described as “The Whore” and “The Fool” in the ancient ritual) are supposedly taken out by the Buckner family, the surviving teens, Curt (The Athlete), Holden (The Scholar), and Dana (The Virgin) flee in an RV, and begin to realize the scope of what they have become involved in.

After a tunnel collapse (set off by a couple of workers below) derails their plans of escape, the three grow desperate, and in one of Cabin in the Woods‘ most darkly funny scenes, Curt attempts to jump the canyon to freedom and safety on a motorbike. Of course, we the audience have already been let in on the fact that a force field surrounds the facility after seeing an errant bird crash into it earlier in the film, but Curt and co. are totally unaware of this. The scene is set up beautifully, with heartfelt farewells, Curt’s promise to send back help, and a swell of inspirational music before Curt takes off, ramping off the cliff to freedom…only to strike the forcefield at 60 mph and fall to his death. This scene, an obvious bit of Whedon influence that fans of Buffy the Vampire Slayer will recognize immediately, is just one in a string that deliberately sets out to subvert our expectations, often with hilarious results.

See, Cabin in the Woods isn’t so much a horror film as it is a look at what a horror film is. It sets out to examine the recurring tropes and trappings of the genre, as well as why these often small-budgeted and wildly unoriginal films continue to draw us back in, time and time again. With that kernel of knowledge in mind, we begin to see what Whedon and Goddard are doing with this story, one where hapless, terrified teens suffering real peril and death are baited and switched with scenes of happy-go-lucky office workers celebrating their painful demises.

We start to see how similar we are to the totally safe and wildly entertained workers of the facility in our pure enjoyment of watching the suffering of others. Like them, we have no need to fear for our lives, and can relish ourselves in the pure thrill of watching normal folks just like us (except younger, and prettier) fight for their lives in increasingly dangerous and desperate situations.

Where this premise is truly explored and turned on its head is in the second half of the film, as the only surviving members of the group — Dana and Marty (who has narrowly managed to survive being dragged off by a zombie) — find a secret entrance to the facility. There, they soon find themselves cornered by the security forces, and release the remaining creatures onto them in an act of desperation.

Now no one is safe, and as relentless carnage rains down on the endless fodder of staff members in the facility, Dana and Marty attempt to find their way to safety. Only at this point, as Dana comes upon the revelation that the ritual is a strategy to sate the appetite of a slumbering, Cthulhu-like God, do the surviving teens begin to grasp the scope of the situation they have been placed in. At this point, Dana (the only character who is “allowed” to survive the sacrifice) turns on Marty and even prepares herself to kill him, only to be gravely injured herself by an errant werewolf. In the end, as the only two survivors left in the entire facility, Marty and Dana rekindle their friendship and decide that they’d rather let the world end than kill each other. “Humanity had a good run,” they surmise, as they pass a joint back and forth while they wait for the end.

It’s a fun, witty, and alternatively grim way to end a horror film, and it suits Cabin in the Woods’ snarky, tongue-in-cheek attitude to a tee. In a sense, as the film comes to a close, it does so as a loving middle finger to the genre it so hates to love, or loves to hate. It’s an ending that highlights the murky morality of our obsession with watching horrible things happen to people for the sake of our own entertainment.

10 years later, Cabin in the Woods is still a film as fresh, fun and inventive in its takedown of horror, in all of its bloody pomp and circumstance, as it was when it first premiered. With campy performances, a clever script, and more horror nods than you can count, Cabin in the Woods is the ultimate love letter to the genre we always come back to, even when we know we shouldn’t.

7 Days: A COVID Comedy That Almost Nails It

The Cabin in the Woods at 10: Celebrating the Film Through its Ten Greatest Monsters