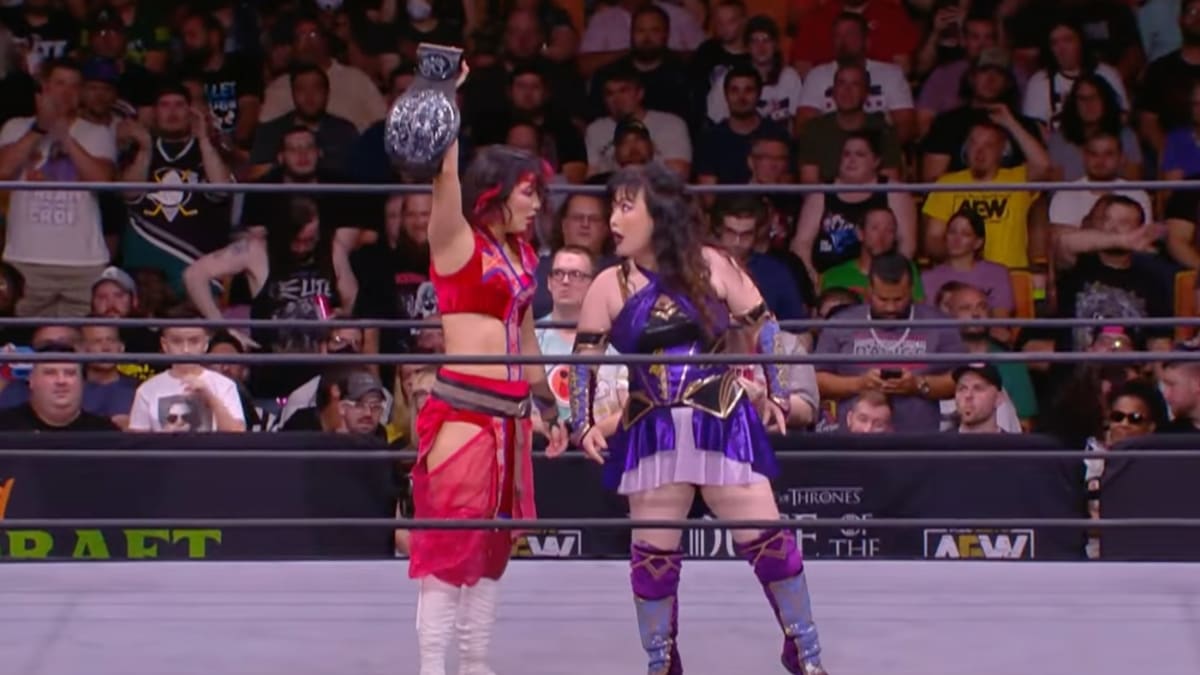 With Match of the Year contenders across all of AEW’s primary shows, it’s safe to say AEW has had a magnanimous year for big matches. But we’d be remiss not to mention the Dark shows stepping up, with more young talent making steady refinements and hidden gems you can access anytime on Youtube. Now without further ado, here are my most recommended Dark and Elevation matches to revisit from the year 2022.

I don’t want to call headlocks and arm wrenches a shtick in pro wrestling. But it’s definitely nice to see just how far a perpetual headlock can still get you in modern wrestling.

Leon Ruffin would put this strategy to good use against Blackpool Combat Club-endorsed Lee Moriarty on Dark. Moriarty is a proven commodity in pure technical wrestling, and Ruffin’s approach adds that oomph that turns chain wrestling into a memorable narrative and meta-game. But even away from that, their evasion and chemistry was phenomenal all throughout.

Overall, this was far and away the best match in the Universal Studios black box, and an easy recommend for fans of technical action.

I’ve come around to this match after giving it some time. I initially thought this wouldn’t be as good if Athena had decided not to hit with malice that day. But I’ve realized that’s a rather weak argument because she did hit hard, no ifs about it. Jody Threat fought with what she had, and she’s tough as nails for absorbing all that, but it just wasn’t her day.

Considering how much noise this inconspicuous Dark match generated, and how it cascaded into an ROH World title win for Athena, it’s a classic that will always live on.

Both Marina Shafir and Skye Blue are still relative newcomers to wrestling, but together, they matched up brutally well. Shafir’s grapple-oriented style vs Blue’s high-speed style needed just one thing to take it to the next level: just going balls to the wall.

No sizing up, no hesitations. Blue really stepped it up here with this strategy, matched by Shafir’s coldness. This was an aggressive back and forth, which gave us both women’s best singles bout in AEW, yet to be eclipsed. Magic every second.

For my money, this ROH Pure title defense was Daniel Garcia’s most impressive AEW match, outside of the Bryan Danielson saga. But more than that, this might also be the single most impressive showcase of Pure rules in AEW.

Brock Anderson’s propensity to fight meshed incredibly well against Garcia’s evasion-savvy. But then, the added layer of Anderson’s inexperience is a narrative thread that was actually enhanced by the often-jarring Pure rules. Garcia has mastered the art of exploiting rope-beak restrictions and baiting punches. And it sounds so small and restraining an art, but he’s made it work. A masterclass from start to finish.

Having Sakura and Shida on the show alone is a guaranteed quality boost, but this match in particular reigns supreme. Sakura and Itoh have such complementary personalities for a pair that apparently aren’t too fond of each other. On top of that, Sakura and Shida’s relationship may be teacher-student in nature, but in the ring, neither woman has any edge over the other. Then, we have Blue who has been one of the most consistent fixtures on the Dark shows all year, especially in high-energy tag bouts like these.

This match had novelty, comedy, technical chemistry, and fire that belongs in the main event. And at the end of it, an upset. Everything you could want and more, and my #1 recommendation from Dark in 2022.

The author’s Dark Wrestler of the Year:
Emi Sakura