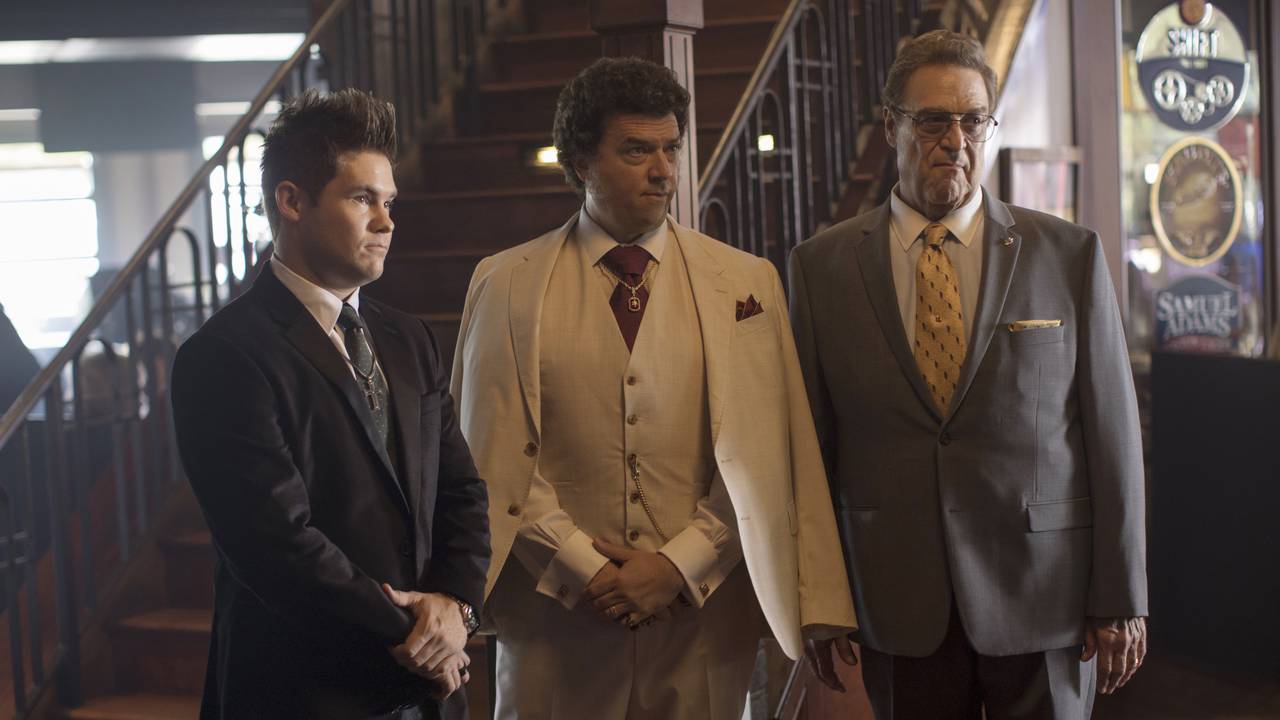 Danny McBride’s latest HBO project, The Righteous Gemstones, will naturally be positioned against network counterpart Succession: both are about the empires of fading white men, their families fighting over the power and legacy bestowed to them, to both comedic and dramatic effect. But a more cognizant comparison would be McBride’s first HBO project, Eastbound and Down, using the twisted prism of post-modern American capitalism as a venue to explore deeper metaphysical thoughts about purpose, identity – and most prescient to this comparison, religion (for a more in-depth look at the beginning of that series, you can still read the piece I wrote about it seven years ago).

With The Righteous Gemstones, the Biblical subtext of McBride’s stories becomes quite literal – and it makes for a fascinating, if slightly unbalanced, first hour, easily one of the summer’s most intriguing premieres.

“The Righteous Gemstones,” the self-titled first episode of the series, explores the same ideas of worship and karma Eastbound & Down quietly did a decade ago: McBride’s ability to mix tinges of existential thought between fart jokes and pop culture references remains underrated with his latest series, perhaps his most ambitious project to date. Though the themes are familiar, the scale is completely different: with The Righteous Gemstones, the Biblical subtext of McBride’s stories becomes quite literal, and it makes for a fascinating, if slightly unbalanced, first hour, easily one of the summer’s most intriguing premieres.

It still needs some fine tuning; the sardonic tone of The Righteous Gemstones can find itself at odds with its ambitions as a comedy and drama. As a satire of evangelical culture, “The Righteous Gemstones” is devastatingly sharp – but that clarity of vision is set in a world full of characters McBride and company want to exist in three dimensions, which is a tall ask for any series to manage effectively over the course of an hour-long episode (forget an entire season, or a whole series). And though “The Righteous Gemstones” doesn’t quite fulfill its own ambitious vision, there’s so many promising moments and points of interest, it seems a matter of time before it finds a groove.

The Righteous Gemstones tells the story of the Gemstone family, led by the patriarch Eli (John Goodman, who absolutely destroys every single line he’s given), and siblings Jesse, Judy, and Kelvin (McBride, Edi Patterson, and Adam Devine, respectively), nepotistic adult babies who worship at the temple of self-righteous greed and power. As one might expect, “The Righteous Gemstones” paints these family members as narcissistic and self righteous as possible: but there’s more meat on the bone with its main characters than expected, offering some interesting twists on the archetypes it introduces the main trio of siblings as.

It can be a bit of a mixed bag: while Jesse and Judy are compelling characters in their own right, the over-costumed, underdeveloped Kelvin is representative of The Righteous Gemstones‘ early struggles to walk the tightrope between genres. Kelvin, the youngest child in the family, is presented as responsible, ignorant, childish, and cunning at different parts in the pilot, a clash of personalities only further undercut by the ridiculous costuming, which feels superficial and forced, even next to the outlandish clothing offered the patriarch and chosen son of the Gemstone family (which at least tap into a specific fashion sense and projection of wealth in the evangelical community, something more potent and funny than “general hipster douchebag” offered Kelvin).

But when “The Righteous Gemstones” is sharp, it’s really sharp: especially when it pauses to reflect on the loss of the Gemstone matriarch, whose ghost hangs heavy over the lives of Eli and his children. There’s a scene where Eli eats dinner alone, in front of a picture of him and his wife, that’s as powerful and poignant as anything the premiere has to say about modern-day evangelicalism (where rich = righteousness), or the tenants of American capitalism McBride is always fascinated with (the fetishization of wealth, celebrity, and tragedy, to be specific). And it’s just John Goodman sitting alone at a dining room table: but what it says about love and faith is as strong as anything else in the series, a moment of reflection on the unseen forces of nature we choose to accept and reject in our short life times.

(of course, there’s a big Sunday brunch that serves as its own highlight; another McBride-ism are scenes set at family dinner, something that’s proven to be a potent setting for storytelling and character on his shows).

There are a few aspects of The Righteous Gemstones that are just downright uninteresting, the blackmail plot chief among them. While it’s at least entertaining to watch Jesse try to navigate inner family politics to try and deal with the situation (someone filmed him doing cocaine with a bunch of naked strippers), it is an extended instance of The Righteous Gemstones fumbling to find its identity: the combination of black comedy and melodrama it aims for is far less interesting than its examinations of the dark, unexplored places where faith and prosperity meet.

When “The Righteous Gemstones” isn’t stuck on Pilot Auto-Pilot (introduce character, give them quirk, give them drama, integrate, repeat), it offers moments of enormous potential, intersecting ideas about American society without doing what too many shows do to ground itself in this specific era of 2019 (where evangelicalism has become “support a racist, homophobic prick bent on the self-destruction of humanity at all costs because he gives us power”). The Righteous Gemstones is not about adjudicating punishment for the evil, narcissistic parasites of society; though objectively designed as a tragedy, McBride smartly crafts his new series as a study of American opulence, rather than a pointed, one-dimensional rejection of the very-real cult of religion TRG is observing.

That’s because at its core, The Righteous Gemstones does hold a curiosity and reverence for the existential: it is perhaps more interested in theology than its titular subjects, whose adherence to Christian customs and behaviors only carries as deeply as the silk lining in their jacket pockets. What happens to a man of purpose, when faced with the meaninglessness of life? How blindly (and simply) can one be corrupted by money and fame? Is redemption attainable? These are the real questions Danny McBride searches for in his art, that are quietly weaved into the DNA of The Righteous Gemstones; and while it may take a few episodes to find the right calibration of its many ingredients, but the pilot is full of vibrant characters, an incredibly crafted world, and plenty of enticing sequences, signs that the series just needs to tweak its recipe a bit to channel the holy spirits of serialized TV greatness.

Mindhunter Season 2: A Deep Breakdown of the Best Show on Netflix