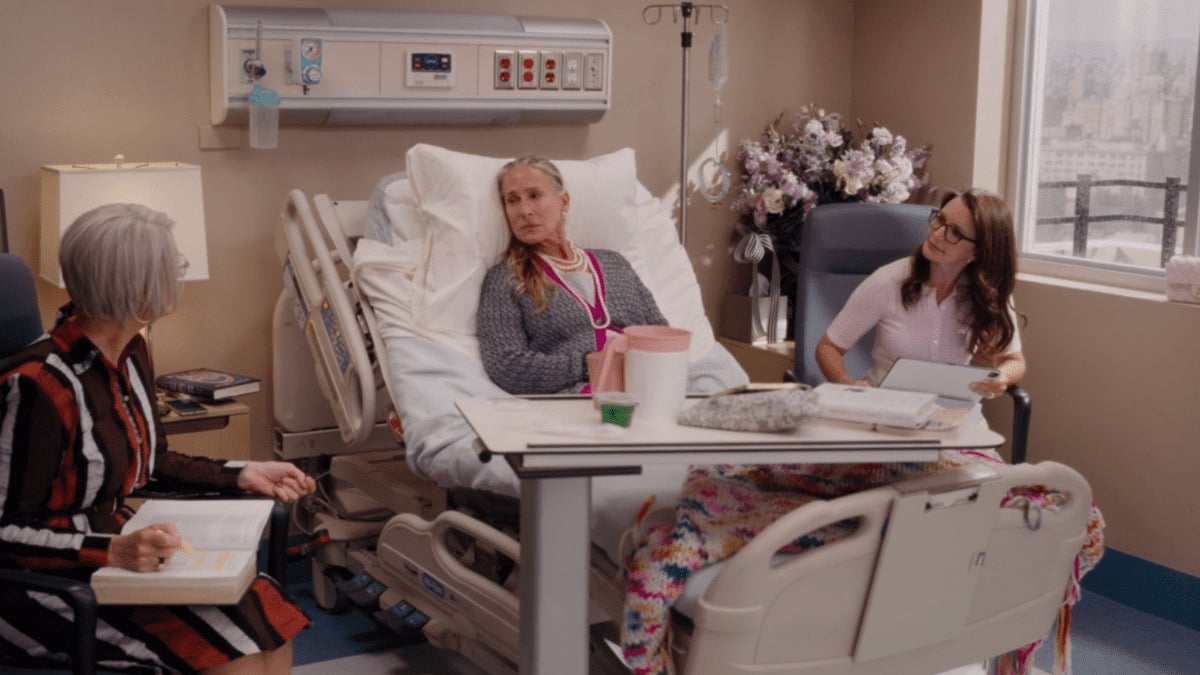 And Just Like That… Season 1, Ep. 5 Review: “Tragically Hip”

And Just Like That… is back with a new episode on HBO Max and, unfortunately, it leaves plenty to be desired. Although it’s not as rough as last week’s episode, it’s yet to recapture the magic audiences experienced with episode three, “When in Rome.”

A Recap of “Tragically Hip”

In this episode, Carrie (Sarah Jessica Parker) finds out she has a congenital birth defect with her hip after Seema (Sarita Choudhury) gets her an appointment with her orthopedist when she notices that Carrie can’t climb a staircase without assistance. Although Carrie’s been able to roam New York in high heels for decades without the hint of an issue, she’s suddenly struggling with her mobility and needs hip surgery.

Meanwhile, Charlotte (Kristin Davis) and Harry (Evan Handler) are struggling with the newfound knowledge that their child is no longer going by the name Rose or she/her pronouns and is instead going by Rock (Alexa Swinton) as well as using they/them pronouns. Although Rock had previously told their parents that they didn’t “feel like a girl,” Charlotte and Harry were unsure of what this meant for their relationship with their child moving forward. In “Tragically Hip,” the pair learn through one of Charlotte’s friends that their child has changed their name—which they later explain they did publicly in what has to be the cringiest TikTok of all time—and then meet with staff at the school to talk about how serious this transition is for Rock. Harry is upset that the school is taking Rock’s name change and pronouns seriously, arguing that if it was up to them that they’d eat ice cream for every meal, while Charlotte is trying her best to be supportive.

We then focus back on Carrie as she recovers from surgery at home. It’s Miranda’s (Cynthia Nixon) “shift” to take care of her, but things don’t go as planned when Che (Sara Ramirez) comes over with tequila and weed, which the two indulge in while Carrie sleeps in her bed. Che and Miranda end up having sex in Carrie’s kitchen, who wakes up to use the bathroom but finds herself helplessly alone. Carrie ends up wetting the bed and when Miranda comes to help clean her up and apologize for being distracted with Che, she confesses that she’s miserable in both her life and marriage and that Charlotte was right to think she has a drinking problem. She ends up going home, dumping out her alcohol but seems determined to continue her relationship with Che.

The episode also shows Carrie and Samantha (previously played by Kim Cattrall) texting, with Samantha supporting Carrie using their “diaphragm story” for her podcast. Carrie ends their conversation with “I miss you” to which Samantha never replies. “Tragically Hip” ends with Carrie getting physiotherapy from an attractive physiotherapist and telling the camera that three months later, she was able to walk in heels once again.

It Was Frustrating to Watch

This latest episode of And Just Like That… was especially frustrating to watch because the conflict felt manufactured and often at odds with the actions of the characters we know and love.

For instance, Carrie’s sudden inability to walk up a flight of stairs, despite having just been able to walk across New York to her old apartment from Sex and the City felt contrived and like a tool to render her helpless in bed so she could witness Miranda and Che having sex. This idea is stressed when she miraculously heals from hip surgery at seemingly light speed and recovers with physiotherapy in just three short months. It also felt like a Samantha Jones move—not a Carrie Bradshaw one—to pay out-of-pocket for a physical therapist just because he was hot when insurance was willing to pay for a less conventionally attractive one.

The scene with Che and Miranda also felt uncharacteristic of the characters. Although it’s great to see Miranda exploring her sexuality and coming to terms with both her unhappy marriage and alcoholism, having sex in her injured best friend’s kitchen feels a far cry from the character audiences know. Additionally, while Che enjoys having fun and smoking weed, it feels strange that they’d suddenly disrespect Carrie and her boundaries.

Even Harry felt at odds with himself in this episode. Previously, we’d seen him supporting his child’s desire to not wear dresses and explore their gender, but in this episode, he’s rallying against Rock’s name change and upset that the school is respecting his child’s pronoun use. Given how often audiences have seen him love his family unconditionally, this felt like a slap in the face in respect to his character development.

While “Tragically Hip” was a disappointing installment, we can only hope this is a case of mid-season pains and that another good episode is on the horizon. While we’re not necessarily wanting this show to be Sex and the City, we do want it to give these characters justice and give us a chance to fall in love with them all over again. You can catch new episodes of And Just Like That… every Thursday streaming on HBO Max.