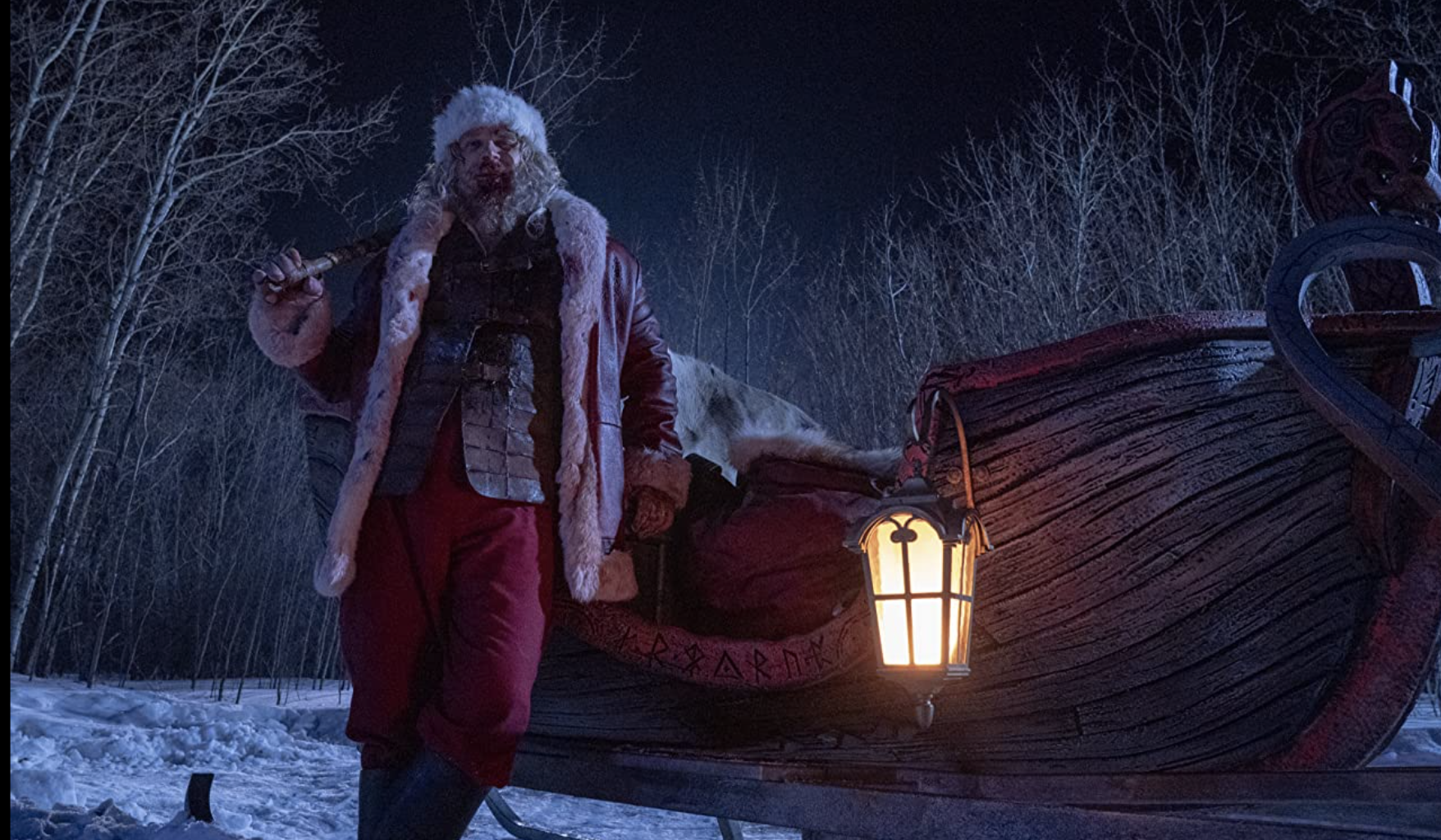 Violent Night is one of those movies that absolutely shouldn’t work, but somehow does, through the sheer force of great action gags.

Yes, most of its ideas are lifted from the same handful of obvious influences, led by Home Alone, Bad Santa, Die Hard, and the Detective Crashmore bit from I Think You Should Leave.

It’s a holiday action comedy, but don’t mistake Violent Night for Jingle All the Way.

The tone fluctuates wildly from scene to scene, as at times it’s a sweet, heartstring-tugging family holiday comedy about Christmas wishes coming true, while at others it’s an acerbic, deeply cynical satire about a horrible family of wealthy jerks. The rest of the time, it’s an action film with an extreme commitment to graphic violence, not to mention some of the most creative cursing in the history of the medium.

But despite the whiplash from those tonal shifts, Violent Night is a success, thanks to fantastic action, consistent laughs, and a go-for-broke lead performance from David Harbour as a mysterious action hero who happens to be the one-and-only Saint Nick.

Violent Night begins the exact same way Bad Santa does, with a man dressed as Santa Claus getting drunk at a bar and lamenting his sad existence. But rather than a conman trying to execute a heist while posing as a mall Santa, Harbour’s version of Kringle is the real deal- and he’s trying to stop a heist, rather than pull one off.

This brings him to the home of a super-wealthy Lightstone family, which made its money in some unspecified way. Led by matriarch Gertrude (Beverly D’Angelo), she’s known for pitting her children against one another, Lucille Bluth-style. Edi Patterson, from the great HBO series The Righteous Gemstones, essentially reprises her role from that show here, as the dimwitted daughter of a wealthy and amoral family.

On Christmas Eve, after an extended period of family bickering, the family’s home is attacked by a group of violent home-invading mercenaries led by “Mr. Scrooge” (John Leguizamo). They’re out to steal the $300 million, which the family was given by the government in order to distribute to various Middle Eastern governments, although they kept it for themselves instead. Yes, this is one of those movies that hints with one line of dialogue at caring about geopolitical intrigue, without ever mentioning it before or after.

It’s up to Harbour’s drunken, depressed Santa, who, a lot like Bruce Willis in a certain other Christmas movie, lurks around the home in order to kill off the bad guys one by one while getting increasingly bruised and bloodied the longer the movie goes. At the same time, he’s there to help restore a young girl’s (Leah Brady) faith in Christmas, as well as her holiday wish to see her bickering parents get back together.

In between all that, Violent Night sports fight sequences that recall those of the John Wick/Atomic Blonde style; David Leitch is listed as a producer.  The body count is also at about the John Wick level, and these aren’t exactly clean off-camera deaths. And of course, Home Alone is a clear major influence, with characters both regularly quoting it and reprising its third act, with a child creatively assaulting criminals with household objects.

Violent Night was written by Pat Casey and Josh “Worm” Miller, who wrote the two recent Sonic the Hedgehog movies and likely had this wildly bonkers script in their desk all along. It’s a combination of clear influences, but more than funny enough on its own.

The director is the Norwegian filmmaker Tommy Wirkola, making his first Hollywood film, although it was shot in Winnipeg. Wirkola is set to direct a movie next year called Smermageddon, which from its IMDB description sounds like an unofficial remake of the segment from Everything You Always Wanted to Know About Sex (But Were Afraid to Ask) where Woody Allen plays a sperm.

Does Violent Night have what takes to become a Christmas classic? It may very well.

Four Samosas is a Pleasant Surprise from Little India