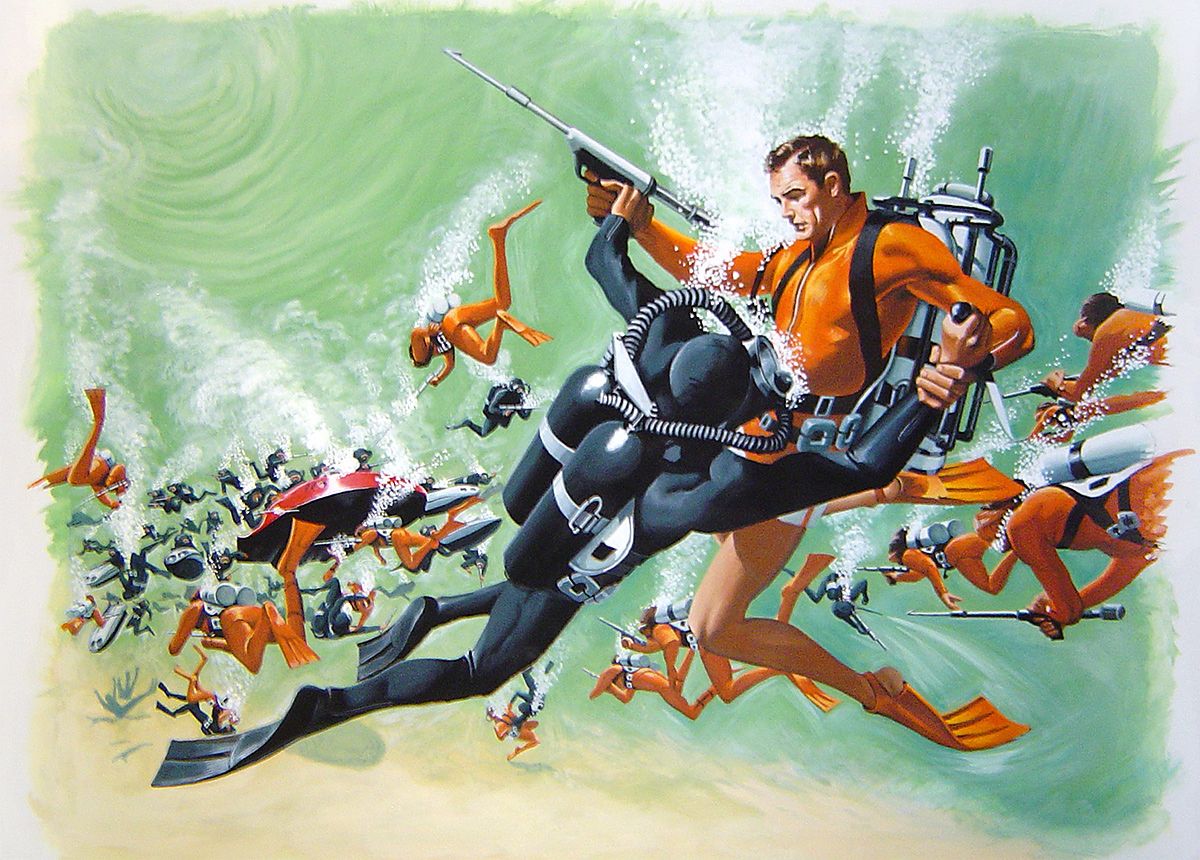 Being a relative novice to the James Bond canon, I have never grown accustomed to the many colorful details that have leaked from the Bond films into popular culture. Thunderball, as I discovered, is the home to many of the Bond clichés, as they’ve more or less become. It is, from what I can understand, the mold that which every Bond film is created.

There are the clever puns delivered with a wink, daring escapes using proto-gadgets that bend the boundaries of belief, the beautiful women, seemingly hypnotized by the smooth debonair Bond, and of course, the cartoonish villain and his cartoonish plot to conquer or destroy the world.

These are all clear marks of every Bond film, past, present, and future. And though there were films that used these ideas before and even Bond films that used the same formula, Thunderball feels like the first Bond film that was completely aware of this precedent and relished every moment.

Thunderball feels like the first Bond film that understood that it’s not about the story it’s about the character. More distinctly, it’s about the character within the confines of a Bond film and our expectations. We ask ourselves before we even see the film “what’s the villain like?” Number 1 is certainly more ruthless and evil than most Bond villains, and Number 2 wears an eye patch just to remind you of that. “Who is the girl?” In Thunderball, there isn’t one, but two buxom beauties, played by Claudine Auger, and Luciana Paluzzi. “What kind of gadgets will we see?” In Thunderball, there are too many to name, but a favorite is the jet pack Bond uses early in the film.

Seeing James Bond escape his enemies wearing a jet pack I became very aware. I knew at that moment this film wasn’t trying for any transcendental cinematic experience, but instead, was proudly wearing its inescapable traits on its sleeve. Before we could even knock, it swung open its door, bear-hugged us, and invited us in. And like a visit with any good friend, for a few hours, we forget. We check our cynicism and enjoy his droll humor, believe his impossible stories of heroism, and let him seduce our girlfriends.

As I said in the first paragraph, I am not a Bond expert. I have only seen a few films. But, after seeing Thunderball there is a better understanding of the franchise, where it stands, and what it means to pop culture. James Bond is one of our more fundamental icons that helps shape our view. We are always evolving with one another within the comforts, proudly established in early films like Thunderball. The franchise, just like us, has its ups and downs but continues to endure.

The Death of Marilyn Monroe, The Rise of James Bond