Jason Statham and his turtleneck are here to punch a giant shark into submission!

The Meg will never be confused with the majesty of Jaws, but it does a sufficiently entertaining job of balancing the predictable and the preposterous. Veteran director Jon Turteltaub knows action, and he designs plenty of set pieces to showcase the hilariously macho Statham battling a prehistoric Megalodon. Whereas Dwayne Johnson’s recent vehicle, Skyscraper, erred on the side of laziness, The Meg pushes the limits of cheesy goodness.

You could probably make a compelling movie about The Meg’s long journey from page to screen. The screen rights to Steve Alten’s 1997 novel, Meg: A Novel of Deep Terror, have changed hands multiple times over the past 20 years. A version directed by Eli Roth came tantalizingly close to fruition back in 2015, but Roth left the project due to creative differences. No word on if these creative differences involved tying the Megalodon to a chair and torturing it. 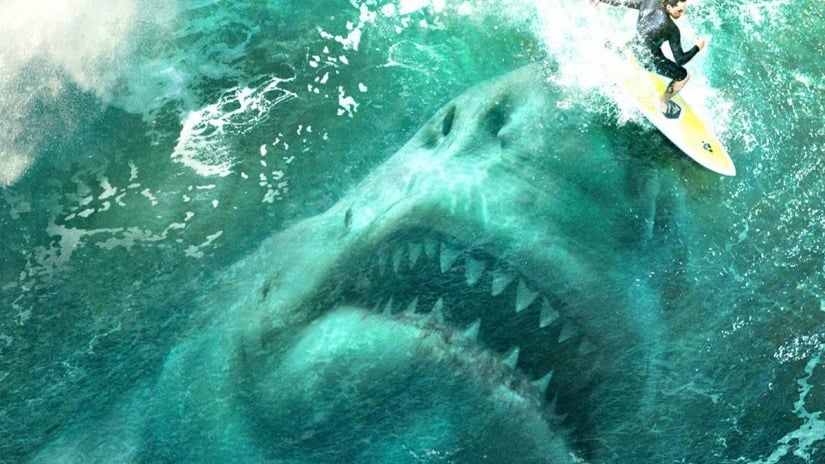 Instead, Warner Bros. chose the steady hand of Jon Turteltaub (National Treasure, The Sorcerer’s Apprentice) to helm their USA/China production. That’s a move somewhat akin to choosing Ron Howard over Lord & Miller to direct Solo: A Star Wars Story. The difference being, Turteltaub isn’t afraid to put his own quirky stamp on The Meg instead of playing it straight like Howard. Though, how straight can you play a story about a 70-foot shark hiding beneath a deep-sea marshmallow cloud?

Statham is the film’s steadying force. Here, he plays rescue diver Jonas Taylor, a man whose bravery is surpassed only by the tenacity of his personal demons. Five years ago, he and his two partners were evacuating a doomed nuclear submarine when it was attacked by something very large with an intemperate disposition. Taylor was forced to sacrifice his partners in order to save the submarine’s crew. Oddly, his claims that an extinct mega-shark attacked the sub were discredited, so he traded in his snorkel for the bottom of a whiskey bottle.

That’s when his old buddy, Mac (Cliff Curtis), and super-scientist Zhang (Winston Chao) come calling to his boozy hideaway in Thailand. It seems that Mac’s underwater research team, led by Taylor’s former wife, Lori (Jessica McNamee), is trapped on the ocean floor after encountering something very large with an intemperate disposition. Taylor is, as they say, intrigued.

The Meg is more of a horror movie than a monster mash. 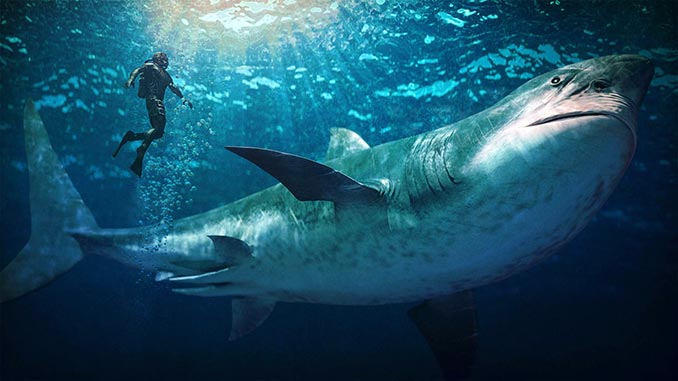 He’s quickly whisked aboard the Mana One research station and confronted by a crew of demographically balanced wisecrackers. There’s the cowardly engineer who can’t swim named DJ (Page Kennedy), the skeptical doctor Heller (Robert Taylor), the foxy engineer Jaxx (Ruby Rose), and a fat guy named The Wall (Ólafur Darri Ólafsson). Why these characters even have names is a mystery, as they should just be known as Chum #1, Chum #2, etc.

In fact, The Meg is more of a horror movie than a monster mash, which means it falls victim to many of the same frustrating horror tropes. Jump scares are overused to the point of predictability. The villain seems undefeatable, as the underwater physics make no sense and the rules for what Megalodon can and cannot do are never established. How does a shark this large manage to appear and disappear at will? Why does a shark living in complete darkness 11,000 meters below the surface need eyes? Is he capable of love?

Turteltaub and his writers keep the preposterous plot as streamlined as possible. Most of the potential intrigue revolves around the research station’s billionaire benefactor, Morris (Rainn Wilson), who seems to have shady ulterior motives (as billionaire benefactors often do). There’s also the threat of a love interest in Zhang’s daughter, Suyin (Bingbing Li). She’s a plucky marine biologist with a nasty habit of needing rescuing. Statham and Li’s chemistry is tenuous at best, cringe-inducing at worst. Mostly, they make googly eyes to pass the time between Megalodon sightings.

It would be nice if we still lived in the days of mechanical sharks like Bruce from Jaws. The graphics department does their best to make a computer-generated shark feel 70-feet long, but it never looks like anything more than a cartoon. Wisely, Turteltaub embraces the cartoonish elements of his creation. The first half of The Meg is a more straightforward action affair, but once the Megalodon asserts its presence, things start getting wacky. The shark’s visit to Sanya Bay off China’s coast, packed shoulder-to-shoulder with sun worshipers, is so gonzo that it almost justifies the entire price of admission (pay attention for a certain dog’s cameo).

Of course, it’s impossible to discuss The Meg without mentioning Warner Bros.’ obvious cash grab for the Asian market. Setting the entire story near China and sprinkling the cast with Chinese actors feels cynical even by Hollywood standards. Still, with more movies turning a profit based solely on their overseas box office (see: Pacific Rim and Terminator Genisys), it’s obvious why studios might move in this direction.

Ultimately, The Meg is adequate late summer fun. You can eat your popcorn, laugh at the stupid action, and occasionally jump when a 70-foot shark inexplicably materializes out of nowhere. If you’re looking for more than that, you should probably just rent Jaws, instead.