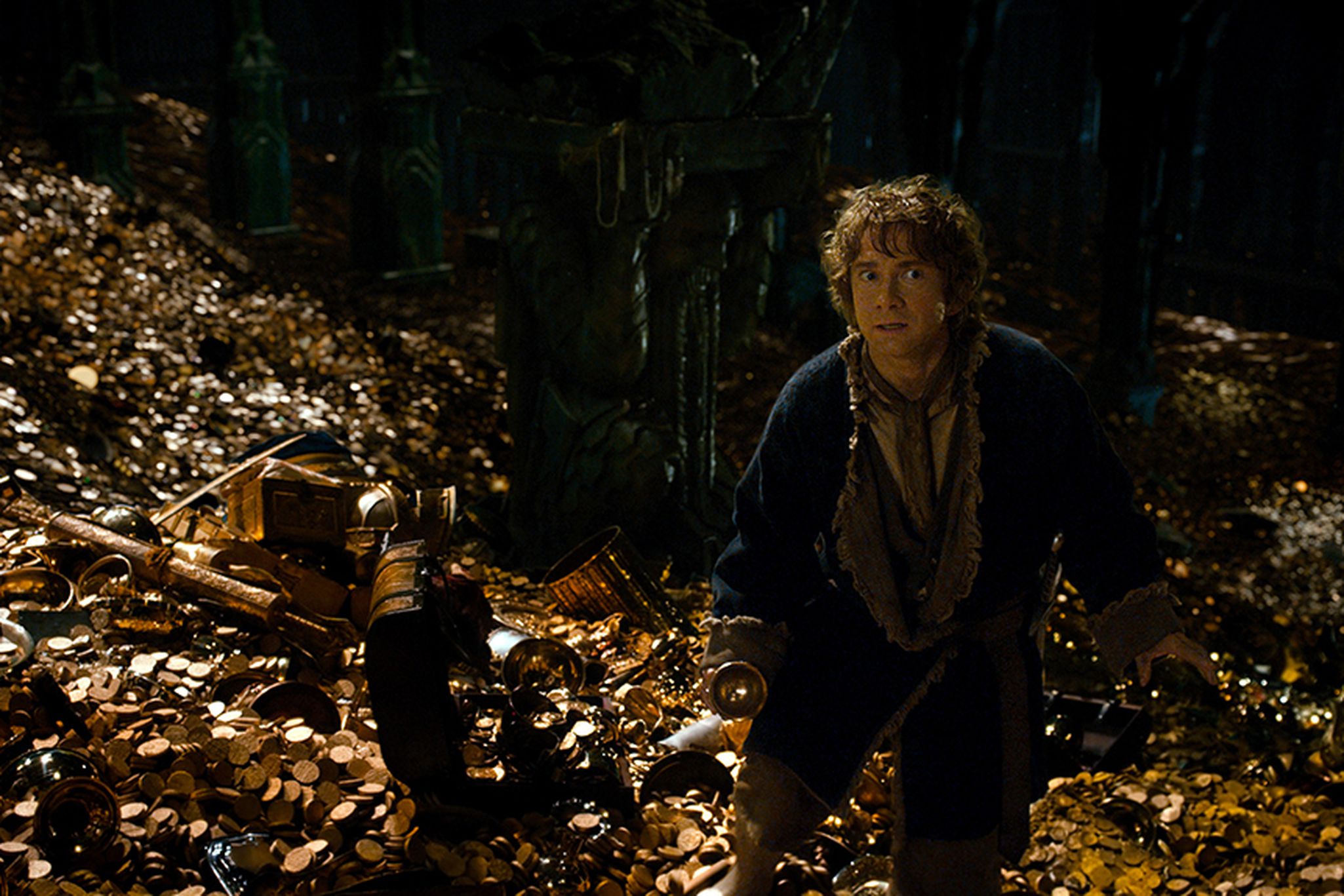 The Hobbit: The Desolation of Smaug

The Hobbit: The Desolation of Smaug is, no doubt, an improvement over The Hobbit: An Unexpected Journey, though perhaps because it is the second of three films based on one book, being a good enough middle entry isn’t quite the same as being a good movie. After spending nearly six more hours over the last two years, back in Middle-Earth with elves, dwarves, hobbits, wizards, Orcs, dragons, and more, it is clearer than ever that co-writer and director Peter Jackson wholeheartedly loves this fantastical universe. Although he can create a facsimile of the imaginary place J.R.R. Tolkien concocted in 1937, and expanded upon later in the Lord of the Rings books, Jackson continues to stumble when developing the characters within that place.

Following the events of An Unexpected Journey, the would-be master burglar Bilbo Baggins (Martin Freeman) continues his adventure with thirteen dwarves led by Thorin Oakenshield (Richard Armitage), who hope to reclaim their homeland by defeating the vicious dragon Smaug (voiced by the now-ubiquitous Benedict Cumberbatch, and say that five times fast), who has overtaken a vast sea of gold, jewels, and more in the Lonely Mountain. It would be spoiling whether or not the dwarves, initially gathered and joined by Gandalf the Grey (Ian McKellen), achieve their goal, but then, something has to happen in the third movie. Unfortunately, because of that looming finale, not too much happens in The Desolation of Smaug; there’s plenty of buildup to action, and manic setpieces wherein Bilbo and the dwarves fight and escape from Orcs. But only when Bilbo first encounters Smaug, teased at for a seemingly endless amount of time, does this movie come alive.

Arguably, the visual experience of watching The Desolation of Smaug is a vast step forward from An Unexpected Journey. (The 48 frames-per-second format, known as High Frame Rate, is being offered for this new film, but unlike with the first film, this writer saw The Desolation of Smaug in the 24 frames-per-second formats.) However, viewing this movie in the same frame rate as literally every other film aside from An Unexpected Journey only heightens the glaring issues represented by the special effects. It is often a common critique of fantastical action epics that the fights within look as if they’re straight out of a video game. For The Desolation of Smaug, at least, it would be more accurate to say that some of these sequences look aggressively cartoonish. Even in a simple scene where the Elvish archer Legolas (Orlando Bloom, back again) is fending off a few Orcs in hand-to-hand battle, the action looks almost deliberately fake. In these moments, and in larger sequences such as a lengthy chase between some Elves, Orcs, and the dwarves stuck in barrels rushing down some rapids, the effects look surprisingly cheap. This trilogy costs hundreds of millions of dollars, but there is always some kind of remove, some distance between the grandeur of the story and the reality of sitting in a movie theater, being bombarded by green-screen effects that swallow actors up whole.

Regarding the ensemble, though there’s still the problem of too few dwarf characters being characterized aside from their names and colorful facial hair, the standout is once again Martin Freeman. He was one half of the best sequence in An Unexpected Journey, in which Bilbo encountered the clutching and desperate Gollum, as well as a certain ring, for the first time. And the trend continues, as Freeman is one-half of the best sequence in this movie, in which Bilbo encounters Smaug for the first time. It may not be a coincidence that the two best scenes in the series so far involve two characters talking to each other amidst ever-increasing tension. There’s more special-effects trickery with Smaug and his darkened fortress of riches—Freeman was likely on a green screen set the whole time, or a good chunk of it, at least—but Cumberbatch’s inherent menace as an actor is present even when he’s voicing a mammoth dragon. And although she’s a character created by Jackson and his co-writers, Fran Walsh, Philippa Boyens, and Guillermo del Toro, Evangeline Lilly, late of Lost, as the guard Elf Tauriel is quite good in her handful of scenes. Though Tauriel is little more than a tough-minded third of a love triangle, Lilly imbues her with enough gravitas to make an impression.

The Hobbit: The Desolation of Smaug is not a massive qualitative leap away from The Hobbit: An Unexpected Journey. Like that film, it’s overlong by at least 30 minutes; there are a handful of scenes that could have been deleted entirely, even if that means less of the droll and sly Stephen Fry as the avaricious Master of Laketown. Unlike the original, thankfully, there’s less setup required of this film. Yet, despite there being plenty of action here, not nearly enough import occurs in The Desolation of Smaug for the first three-quarters, to the point where it’s easy to wonder why, exactly, Bilbo Baggins feels like a background player in a story he’s telling to his nephew, Frodo. Each of these movies has shined brightest when he takes center stage. If we are lucky, the third and final installment of this overly epic series will put him back in the spotlight for more than a half-hour.

The Hobbit: The Battle of the Five Armies is a Fitting Farewell to Middle-Earth

Return To Seoul: An Enigmatic Journey of Discovery