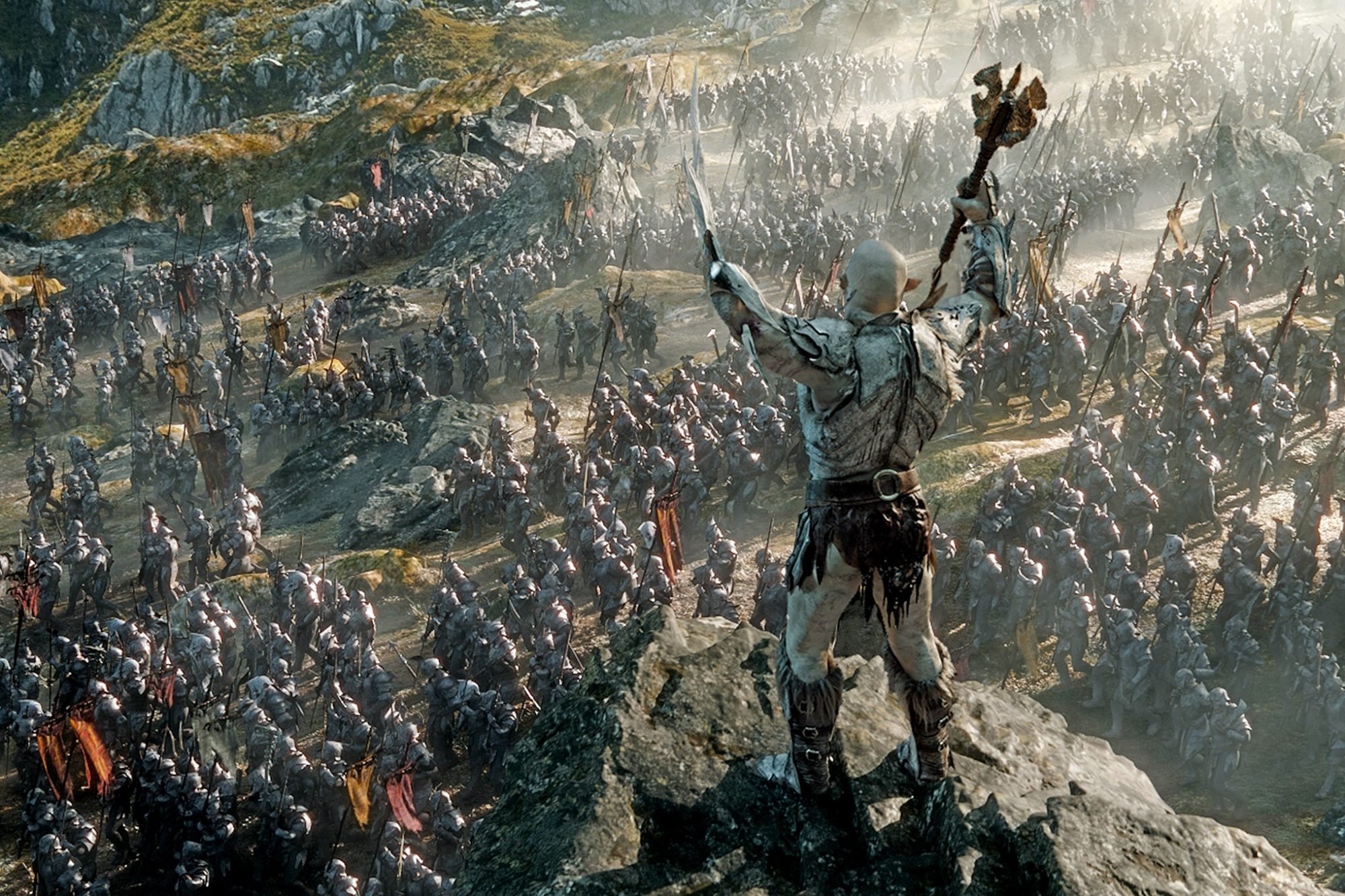 The Hobbit: The Battle of the Five Armies Review

To fully appreciate Peter Jackson’s last foray into Middle-Earth, The Hobbit: The Battle of the Five Armies, one must understand it’s actually two separate movies.  The first movie is a sour, pseudo-Shakespearean morality play that has nothing to do with Hobbits.  The second movie is a heartfelt rumination about friendship and self-sacrifice.  For those willing to overlook the sour for the sweet, there are great treasures to be found, as Jackson brings his trilogy to a suitably-epic conclusion.

Well, Bilbo (Martin Freeman) and his crew of Dwarves have really done it this time.  They ticked off the evil, treasure-hoarding dragon, Smaug (Benedict Cumberbatch), and now the good folks of Laketown must pay the price.  In a spectacular opening sequence, Smaug rains fire upon the town as our Human hero, Bard (Luke Evans), futilely fires arrows at his tender underbelly.

For all of the excesses in his two epic fantasy trilogies, Peter Jackson has always kept a beating heart at the center of his sometimes self-indulgent monstrosities.  Whether it’s the reassuring presence of the magic-free wizard Gandalf (Ian McKellen), or the doomed love affair between an Elven princess (Evangeline Lilly) and a rabblerousing Dwarf (Aidan Turner), Jackson understands that spectacle can’t hide a lack of drama (see: Exodus: Gods and Kings).  He knows that even when things are threatening to come unhinged, he’s got a lovable Hobbit to pull everyone back into the story.

True, we’ve all wailed against Jackson and his co-screenwriters, Fran Walsh and Philippa Boyens, for making Bilbo a secondary character in his own story.  There’s no denying, however, that a Hobbit wouldn’t last long when the blood starts flowing, and Jackson loves himself a good bloodletting (and decapitation).  Still, it’s a shame we don’t get more of Freeman’s understated brilliance.  He inhabits this role with an ease and believability that eluded Elijah Wood in The Lord of the Rings.  When Bilbo cradles a dying comrade and tries to reassure him that, “The Eagles are here,” it resonates with a sincerity that breaks your heart.  A few more doses of that innocence might have elevated this trilogy to the lofty heights of its predecessor.

Like The Return of the King, Jackson spends a huge amount of time on his prelude to war.  There are myriad speeches about the perils of combat, plus plenty of strategy and negotiation that doesn’t amount to much.  Though the finale is more streamlined than the previous two films, these sections still feel a bit padded.  The only saving grace is that much of this section is dominated by the madness-tinged soliloquies of Thorin, who’s suffering from a form of gold lust called ‘dragon sickness.’  Armitage has a blast chewing the scenery and initiating a nasty little war.  Once the action starts, it’s unrelenting and glorious.

Jackson, again, juggles parallel and intersecting plotlines in (mostly) satisfying ways.  Some of his transitions run pretty raggedly, reeking of time-necessitated edits, but Jackson does what he must to keep the pace brisk.  Even if you can see a few of the seams, it’s unlikely you’ll get restless during the film’s ample running time.

Whether it’s the majestic Lonely Mountain or a precarious ice shelf glistening beneath the sun, Jackson is a director who adores using the entire canvas.  Especially vivid are two psychedelic freak-outs that come out of nowhere.  First, when Galadriel (Cate Blanchett) confronts an ethereal Sauron and his minions, then again when Thorin reaches his epiphany.  These are scenes you’d never see in a Hollywood blockbuster and truly set Jackson apart as a creator of epics who still thinks like an artist.

Of course, The Hobbit is not without its considerable faults.  The CGI is dodgy at times.  Particularly problematic is Legolas’ mid-air duel, which looks like a rejected sequence from some Donkey Kong videogame.  While we’re on the matter of Legolas… his gravity-defying exploits may have finally gone too far.  Much more of this and Joss Whedon will be adding him to the next Avengers flick.  The dialogue, too, is predictably hilarious in places.  “These bats were bred for one purpose,” drew the heartiest laugh of the evening, but there are plenty of groan-worthy lines to keep your eyes rolling.

When Jackson is on, however, there are few filmmakers who can match his narrative momentum.  The Hobbit: The Battle of Five Armies looks and sounds great, and once it finally gets rolling, there’s no stopping it.  The ending, also, is far more satisfying than the LOTR trilogy.  More than feeling like an extended curtain call, it adds actual merit to the story.  For all the warranted criticism leveled at Jackson for splitting (and padding) his Hobbit, these are still thoroughly entertaining movies, full of imagination and creative passion.  We may debate their merits and flaws, but we probably won’t see anything like them for quite some time.

Superbad: The Best Teen Movie of the Aughts

The Hobbit: The Desolation of Smaug a Mild Improvement on its Predecessor