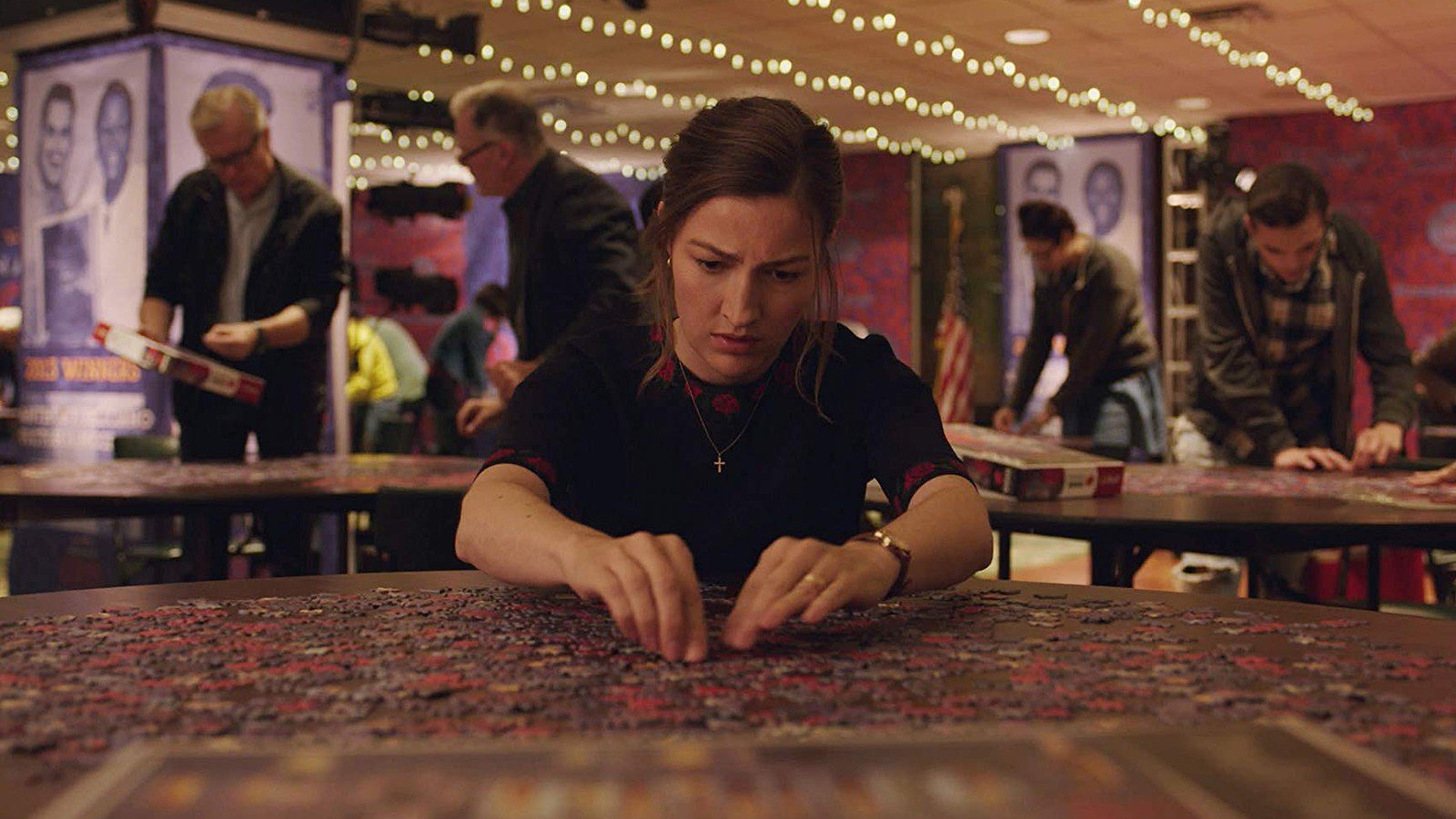 Marc Turtletaub’s Puzzle starts with two mundane birthday gifts: a phone and a jigsaw puzzle. Agnes (Kelly Macdonald of No Country for Old Men and HBO’s Boardwalk Empire), a stay-at-home mother and wife, figures that she has little to no use for the phone, but discovers that she is wonderfully adept at quickly putting together jigsaw puzzles. Soon she reluctantly follows up on an open call for a puzzle partner, texting the stranger. From there, her life starts to change — first with a trickle of fleeting thoughts, then with a deluge of exciting propositions. Puzzle is the charming portrait of a woman finding her voice by simply being good at something and staging a quiet revolution as she comes into her own.

Agnes’ loving but controlling husband (David Denman) fails to see what the world has to offer Agnes outside of their home. Shopping, cleaning, laundry, church, and her two boys normally preoccupy all of her time, but as soon as Agnes starts pursuing her passion for puzzles, she is swept away from her duties and reinvests the time in herself. Her puzzle partner is a wealthy investor and divorcée named Robert (Irrfan Khan), who recognizes her talent and implores her to chase it with him in a doubles puzzle competition. Robert also helps to ease Agnes out of her cemented routines and allow for new experiences. Khan plays a similar role to the one he had in The Lunchbox — inviting, and able to coax out the potential of a woman taken for granted. He again is an unlikely friend and romantic prospect but is completely convincing in his ability to persuade Agnes to wander far from home and open her eyes to other possibilities.

The film embraces modest Agnes and its quaint catalyst of a puzzle competition. It’s clear that the story has an overwhelming warmth for all that Agnes has done for others, and forgives whatever mess she gets herself into. The writing doesn’t need her to be sorry — only to finally reward herself for her years of underappreciated service. Macdonald has a tender demeanor even when she is delivering bad news, and when she finally stands up for reclaiming her time, she delivers shocking lines with underlying pleasantness or a knowing smirk. This level of acting and attention to detail makes Puzzle so watchable and relatable. Macdonald here acknowledges that Agnes is not malicious — just that she’s finally had enough to bring herself to a crossroads where she puts herself first. Even when Agnes makes big decisions, she does so mindfully, with subtle indications of the conflict waging within her between loyalty and happiness.

Puzzle doesn’t aim to be precious, but ultimately conveys a moving sweetness that’s helped along with a good dose of reality. Agnes’ lack of grand ambition and direction doesn’t denigrate her intellect or the scale of the story. Puzzle is an absorbing peek into a muted life that begins to blossom.

‘Before We Vanish’ Finds Redemption for Humanity