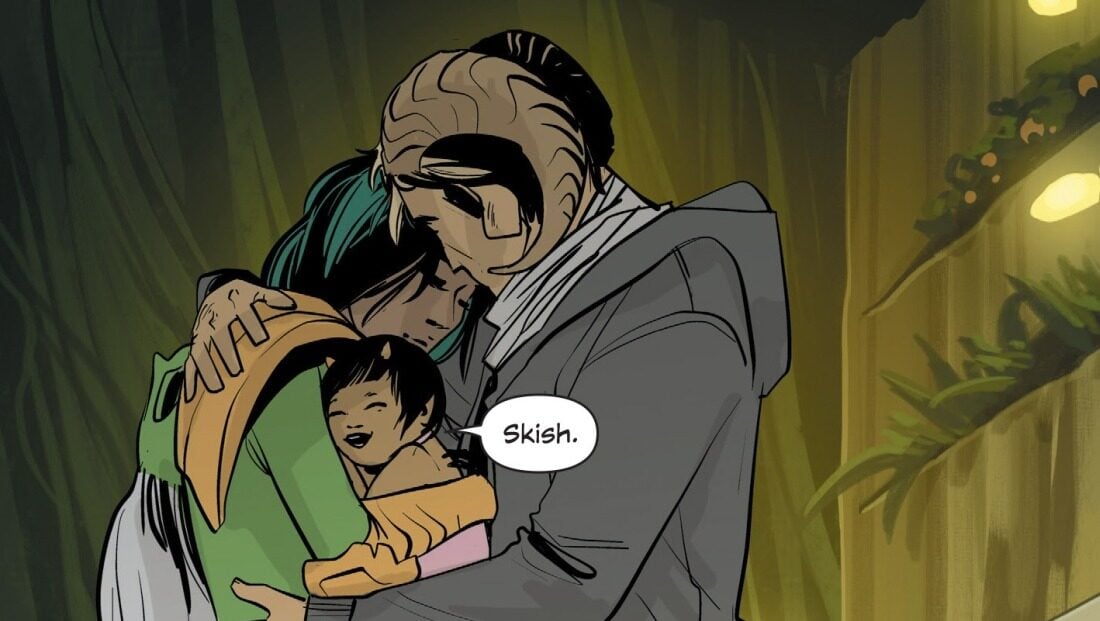 All images via Image Comics

Image’s flagship book Saga is back

Fans of popular TV series might understand the anguish it is to wait for the next season. They see their favourite character die, only to have succumbed to a black screen and the credits. It’s quite daunting, but those who read Saga by Brian K. Vaughn and Fiona Staples know what it’s like to wait. Back in 2018 when the Coronavirus wasn’t the topic of every conversation, Saga ended in such a way you can hear the cries from every local comic book shop. Then they announced it was going on hiatus, this time for an indefinite amount of time. Thankfully, news of its return hit the news sites. Saga will be back with issue #55 in January 2022. This love story is a must-read for anyone trying to get into comics, and it doesn’t require any knowledge of any other works.

A Tale as Old as Time

Saga, is a completely unique comic, not based on any existing IP, and contains zero superheroes. It tells the story of a little refugee girl, her interspecies parents, and the friends they make along the way, escaping an intergalactic war. It may sound simple but that’s like saying The Sopranos is about a mob family living in New Jersey. There’s a lot more content and depth to it. Take the political intrigue of Game of Thrones, the love story of Romeo and Juliet, and the creative world and creatures of Star Wars and Doctor Who. Throw that into a cohesive story about survival, war and, love. That’s Saga.

Saga tells the story of Alana and Marko, soldiers of the planet Landfall and its sole satellite Wreath respectfully. Landfall is a restless sci-fi wonderland, while Wreath is a magical fantasy realm. The two can’t be any more different. These two entities have been at war with one another for a long time and the reasons behind the conflict have been vague at best. The two protagonists have to go on the run after conceiving a child that supposedly shouldn’t exist. Her existence causes such a stir that a powerful monarchy composed of androids sends their prince, and a series of freelancers to apprehend the child. It only gets wilder from there with all the side stories the protagonists and antagonists have to go through. Though they take center stage for a good part of the story, Saga is really about their child Hazel and her experiences in a war-torn galaxy.

A Cast of Misfits and Malcontents

What makes Saga work are the characters and their relationships. Alana and Marko argue about their past, they have different views of war, and at times get fed up with one another. When writing children like Hazel or Sophie, Vaughn makes sure they speak like children; using a limited vocabulary with a naïve viewpoint of the world. But it can go to a dark and heartbreaking place in regards to the latter. Unlike some easier to read stories that use strawmen to represent hate groups, Brian K Vaughn has a wonderful grasp of how to make multi-faceted characters. Even villains can show more than greed or hate. These character arcs, as long as they last are brilliant. They evolve and develop new feelings and ideals. Some characters fall to their vices, while others nearly reach redemption, and only need a little nudge to achieve it. They befriend enemies and find love in all the right and wrong places. But, as the reader grows to love these diverse creations, they’ll also learn what it’s like to lose them. Just like the earlier seasons of Game of Thrones, anyone can die, and most likely will. Spoilers. Or not.

Saga Asks What is Love?

Jonathan Larson said in his musical Rent  “The opposite of war isn’t peace; it’s creation.” In a similar vein, a fictional writer in Saga replaces the word “creation” with “f***ing”. He might be going in the right direction but is on the wrong track. It’s far broader: it’s love. Just like war, love is chaotic, heartbreaking, and can shatter the established world. Saga treats it as complicated, unfulfilled, and unconditional. Seeing how all these characters, both villainous and heroic, all display some form of ever-changing love is equally terrifying and heartwarming. Sometimes characters fall in love with someone new or refuse to pursue it after too many heartbreaks. Saga also doesn’t shy away from different kinds of romantic and physical relationships. They introduce numerous LGBTQ characters who are more than just their identity. They go beyond classic meet-cutes in rom coms and find a way to make it real.

Saga simply unafraid and unashamed. Vaughn and Staples are willing to talk about everything from hardcore sex, fanaticism, and child murder. They normalize vulgar vocabulary when discussing such topics, especially love. One of the first words spoken are “Am I sh***ing? It feels like I’m sh***ing” in regards to giving birth. This along with the cover depicting breastfeeding caused a stir with news outlets calling it obscene. Not only did the creators not back off, they decided to see how far they can go. There are splash pages of robot genitals, and heads exploding. Making no topic taboo expands the possibilities of the human experience. Especially that of love, lust, and all of its naughty and messy siblings. It expands on the classic tropes, allowing anything to happen, but without random chaos.

You will Love Saga

It does need to be said that there are no mentions of “humans” in Saga. But, one does not need to be human to feel love, show brazen loathing, or have their heart shattered to feel the way we do. Brian K Vaughn is able to bring humanity to Fiona Staples’ bizarre and outrageous designs in this space opera. Other wild tales may teach morals about following or breaking the rules, Saga doesn’t have that. It’s a series of character pieces and shows the lengths people will go for love. Those who read it understand and can’t wait to see what <REDACTED> Does after seeing <REDACTED>. Those who have not read it will immediately fall in love with Marko, Alana, and Hazel.

Holy Cow! You Can Now Rent the Home Alone House