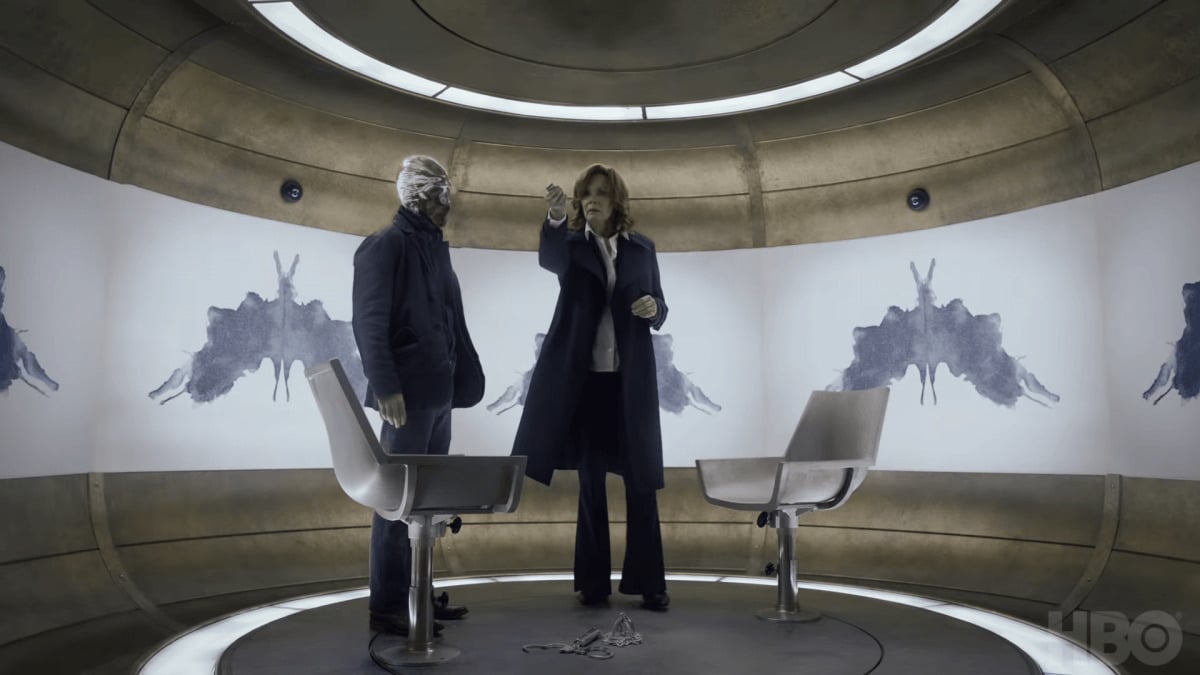 The introduction of FBI agent Laurie Blake is an important demarcation of Watchmen‘s first season: most obviously, it pushes away from Angela as our sole point-of-view character, which offers an immediate change of scale and perspective. But “She Was Killed by Space Junk” is not only an episode of Watchmen following a different character – it almost feels like a different show, one that’s a much more direct sequel to the original graphic novel series. For fans of the book, “She Was Killed by Space Junk” is a particularly fascinating hour of the young series – but for those who haven’t read Alan Moore and Dave Gibbons’ work, I wonder how effective this hour can be.

The indelible images of every consequential action in Watchmen continue to gather weight in “She Was Killed by Space Junk” – but without any semblance of release.

After all, Laurie Blake’s history is about as entwined in the original Watchmen as one can be: she’s the daughter of The Comedian and the original Silk Spectre, and former lovers with Dr. Manhattan and Nite Owl II. Pushed into the family business of crime fighting by her parents, over time she was known as both The Comedienne and Silk Spectre. She became the latter after ending her long relationship with Dr. Manhattan, who then embarked on his permanent (wink wink) departure to Mars, the last semblances of his humanity gone.

The Laurie we meet in “She Was Killed by Space Junk,” is directly informed by all these life moments; we first see Laurie telling jokes to a Mars-based voicemail, and shooting a vigilante in the bank during a staged bank heist, immediately establishing her as a fulcrum of sorts between Moore’s Watchmen world and Lindelof’s.

In fact, understanding her position as said fulcrum almost requires some fundamental understanding of who her character is; she comes with such weight of history, and acts as such an integral connective point between so many original characters, every action she takes in “She Was Killed by Space Junk” is colored by information from the past. Her decision to join the FBI, her melancholic tone on Dr. Manhattan’s “voicemail”, the incendiary way she refers to thin line between vigilante and masked cop; all of these notes, which may seem strange in their introduction, are integral to truly capturing the gravitas Laurie has when she arrives in Tulsa, long before an SUV was dropped out of the sky next to her, like a brick hurtling down unsuspectingly onto God’s head.

It’s a rather genius integration of one of the book’s more interesting loose threads; but as an introduction to new audiences, Laurie’s past is so buried in the subtext of her actions, it may make for a confounding watch for newcomers. Her position – woman frustrated with the state of things, ponders a time when she shared her life with a quasi-god – is more intriguing to the uninitiated, which might make her a bit of a cipher to understand without the right context.

Thankfully, Smart’s dominating, sneering performance is more than capable of making up the emotional chasm new viewers might have in understanding her character. If it doesn’t, however, “She Was Killed by Space Junk” gives us an extra scene of her and Looking Glass trading barbs, which helps define her character’s (current) ethos and sensabilities in a rather fun way (though her dominating presence is a reminder of how Looking Glass isn’t much more than an idea and a cool mask to this point).

She also neatly ties whatever is happening with Sister Night directly to Laurie, and possibly, Dr. Manhattan: part of her investigation in Tulsa is decoding the clues around Judd’s death – and since she knows where everyone likes to hide their true identities and favorite costumes, she immediately establishes herself as someone of greater import than say, Panda or Red Scare. Her authority is federal; whatever strange experiment the state is running, with their mask-adorned police hedging the boundaries of society’s laws, she doesn’t really give a shit. She’s here to seek out the town’s true sources of power: which is why she spends so much time looking at Senator Kane (who clearly is a Kavalry member; after all, Judd’s wife ran his campaign, as telling a detail as any).

But while she’s looking for sources of power on the ground (other than the Kavalry’s suicide vests, that is), Dr. Manhattan remains the true unseen force of nature: where his presence was merely referenced in previous episodes, the weight of his influence on the world of Watchmen and its characters consumes much of “She Was Killed by Space Junk.” And again, it’s the kind of thing that might feel weighty to audiences, and amorphous to newcomers; regardless, however, his impending return can be felt throughout this hour, culminating in (what I assume is) him dropping a car near Laurie, as a reminder that he has a sense of humor, and she is as fallible as the god whose head was caved in, by a seemingly random throw of a brick.

If there’s a brick floating in the Watchmen air, however, it is not the man who likes flopping his blue dick around in space; by speaking his name and running an experiment to travel through space, Adrian Veidt makes his triumphant, if unhinged, return in “She Was Killed by Space Junk” – where it becomes pretty clear his current situation is one of imprisonment, rather than voluntary detachment from the world. After all, why would he shoot at the foot of the Lone Ranger (shout out to Petey) lurking on the edge of his property, and be experimenting with his “subjects” what very obviously appears to be space travel?

“Look on my works, ye mighty, and despair” is not just a quote attributed to Lady Trieu at the groundbreaking of the Milennium Clock (which may or may not be a direct reference to the clock Jeff Bezo’s been building in our own world), or a reference to Percy Bysshe Shelley’s classic poem; it is a harbinger of things to come, as the powers that be in the world of Watchmen consider the passing of time and how it has affected their legacy. Has Angela spent years fighting – and loving – a Klan member? Has Veidt accomplished anything – and is his prison, actually a godsend of focusing (or unhinging) his intelligence? Or more specific to Laurie’s case: can the love of a human being, never fill the void left by the love of a god?

Whatever the people in the world of Watchmen think they’ve built for themselves with their structures, prisons, and identities, the world has a way of warping it: be it the body of Mr. Shadow, or the attempts to give police some sense of protection by giving them masks, the indelible images of every consequential action in Watchmen continue to gather weight in “She Was Killed by Space Junk” – but without any semblance of release. The arrival of Laurie suggests some of that weight is about to be relieved in the next couple hours – but it also suggests a further complexity being added to the narrative of the series, which is beginning to feel the pressures of its many plot lines, subtle mysteries, and growing collection of references to the revered source material.

Thanks to Smart, “She Was Killed by Space Junk” is able to hold onto the thread; but with characters like Lady Trieu and Dr. Manhattan still waiting to make their official entrances, it’s hard to imagine Watchmen adding anything to the pile, without losing something in translation. Admittedly, this series’ has swiftly defied – and exceeded – expectations, but the sudden integration of so much source material begs the question of whether Lindelof and company’s eyes are starting to get larger than their stomachs. Recent evidence suggests otherwise, but only time will tell whether this strange, winding road Watchmen is taking us down will pay off all these threads and ideas in the end.

Fun fact: Kane’s father was the one who wrote the original anti-vigilante laws back in the ’70s. I’m sure that won’t have any importance later in the series.

Is Veidt making suits out of leathered human skin? Because that is definitely what it looks like.

There’s an interesting theory out there that Hooded Justice and Angela’s grandfather are the same person, which explains the intertwined noose symbolism.

Exploring the Grey Morality of Watchmen