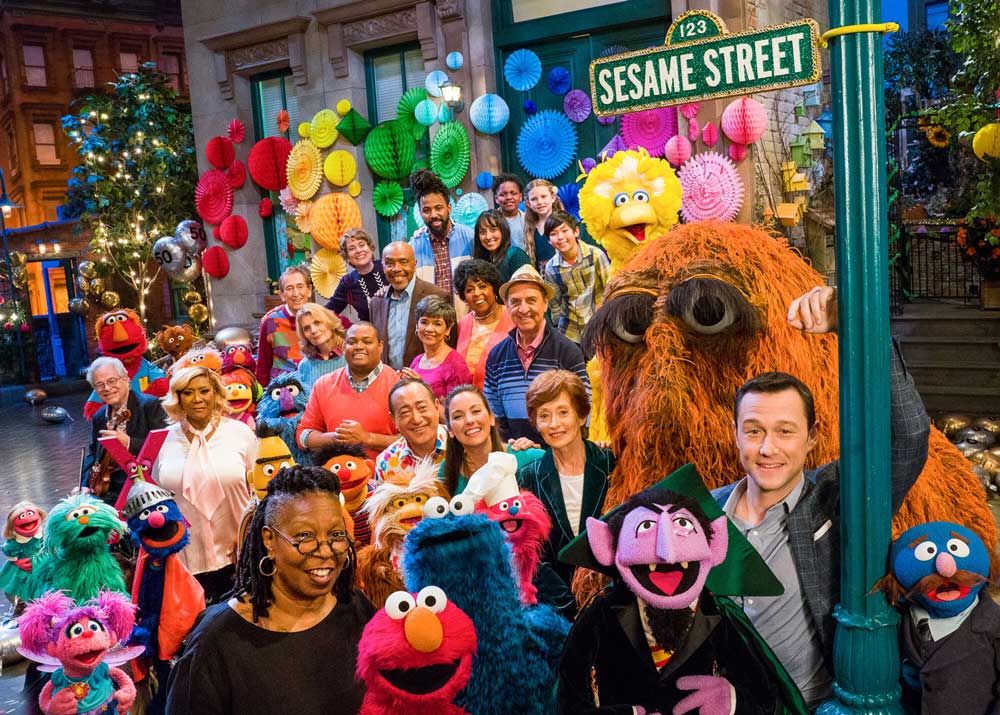 Sesame Street turns 50 years old this week, and for the occasion the show’s current home, HBO, showed a special Saturday night, starring Joseph Gordon-Levitt and the show’s human and puppet casts of the past and present.

The anniversary show, while it contains some decent nostalgia moments, feels somewhat underwhelming. It was barely promoted, feels thrown together and doesn’t really have the ambitious scale that’s worthy of the magnitude of the show’s half-century anniversary.

The gimmick of the anniversary special, which runs just under 50 minutes, is that Gordon-Levitt, a longtime fan, is visiting Sesame Street, and really wants to get his picture taken with the characters, under the Sesame Street sign. The sign, however, has gone missing, and Elmo and friends must distract him to keep him from discovering that it’s gone. They all reach the honorable but not-so-earth-shattering conclusion that Sesame Street is less a physical place than a state of mind.

Throughout, we get some surprise appearances by Sesame Street‘s human characters of old such as Luis (Emilio Delgado), Gordon (Roscoe Orman) and Maria (Sonia Manzano), and also long-absent muppets like Guy Smiley and even Kermit the Frog, who was a mainstay of Sesame Street‘s early days but has mostly been absent from the show since the 1980s.

Kermit duets his signature Sesame Street tune “Bein’ Green'” with Elvis Costello, one of several musical numbers in the special. Norah Jones shows up to sing a song, and is visited by the talking letter “Y,” a callback to the time she remixed her song “Don’t Know Why” as “Don’t Know Y,” and there’s also a montage of famous Sesame Street songs. Patti LaBelle also shows up, as do Nile Rodgers and Meghan Trainor, and the show’s longtime mainstay Itzhak Perlman plays his violin on the show again as well.

Non-musical cameos include Sterling K. Brown (from This is Us) eating cookies with Cookie Monster, as well as an appearance by Whoopi Goldberg.

One of the more underwhelming aspects of the special is the relative lack of classic footage. The 50th anniversary could have occasioned an hour-long clip show, featuring some of the show’s most significant moments, celebrity cameos, and other Sesame Street touchstones, in a way that tells the story of the history of the show.

Instead, we get Joseph Gordon-Levitt spliced into footage of classic Sesame Street moments, such as the Mr. Snuffleupagus reveal from 1985 and Grover’s “This is near/this is far” routine.

The show chooses not to address the incongruity of young-seeming characters like Elmo and Big Bird not actually being 50 years old. And while it’s understood that the characters’ voices aren’t going to say consistent as different performers cycled through the roles, whoever is currently voicing Big Bird sounds nothing whatsoever like the recently retired Carroll Spinney.

Those who are longtime Sesame Street devotees, whatever their age, will likely find some elements to enjoy in the new anniversary spell. But the special doesn’t feel anything close to definitive.

The special will head to PBS on the 17th, the same day the show debuts its 50th season.

Sesame Street at 50: A One-of-a-Kind Tradition

Watchmen Season One Episode 3 Review: “She Was Killed by Space Junk”