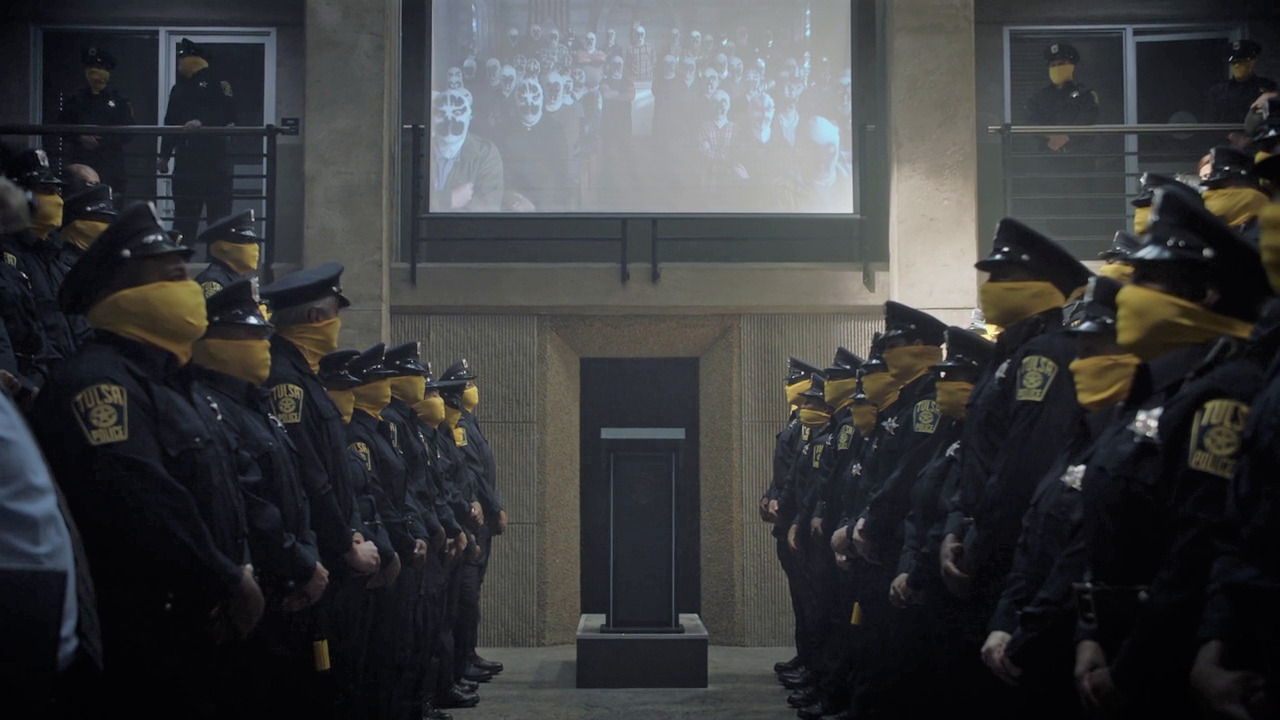 As an adaptation/sequel/re-imagining/remix/re-whatever of Watchmen, HBO’s latest prestige series arrives with particularly pernicious expectations – expectations that creator Damon Lindelof and director/executive producer Nicole Kassell have absolutely no interest in fulfilling. Like the seminal graphic novel it is based on, Lindelof and Kassell’s Watchmen is a complex deconstruction of genre and form, its meta-textual underpinnings fueling its powerful ruminations on modern society; using the alternate, Redford-ified world of its source material, “It’s Summer and We’re Running Out of Ice” is a brave, striking first chapter, a beautifully crafted hour driven by terrific performances, layered subtext – and a score that slaps harder than anything else on television.

“It’s Summer and We’re Running Out of Ice” is a brave, striking first chapter, a beautifully crafted hour driven by terrific performances, layered subtext – and a score that slaps harder than anything else on television.

Opening on the very real Tulsa riots of 1921 – where Black Wall Street was decimated by racist attacks on black-owned businesses, an appalling slaughter strangely obfuscated from most history books – Watchmen‘s first hour is a carefully arranged set of dominoes spread across American history, mixing the real and fictional much like its source material did (in this world, Nixon is on Mount Rushmore, and Robert Redford’s been president for decades). And by opening on an oft-ignored, absolutely integral part of America’s racist history, Watchmen immediately begins to embody its fascinating deconstruction of good and evil; all the “Redfordations” and 20th-century social progress are but a mask on our country’s still-existing systemic racism, one of many moralistic prisms Watchmen explores in its first hour.

After its opening scene, “It’s Summer and We’re Running Out of Ice” jumps to the present, to follow the story of Detective Angela Abar, who works undercover as Sister Night for the Tulsa Police Department. With her comes the unraveling of the show’s existential musings on law and order, on the nature of superheroes, and the power (and danger) of having a secret identity. After a black officer is shot by a member of the white supremacist group The Seventh Kalvary, Angela sets on a semi-vengeful course of “justice” in trying to solve her colleague’s murder – but in a world where the police have ceded their power to white nationalists, her investigation is neither straightforward or successful.

By the end of “It’s Summer and We’re Running Out of Ice,” Angela’s broken any number of laws, from trespassing to kidnapping, shades of gray against the stark black and white costume she adorns when it’s time to fuck up some Nazis – or in this world, Rorschachians (Rorschachsters? Rorschachists?), nationalists who’ve claimed the explosive diary as their Mein Kampf of sorts. Watchmen doesn’t play nearly as coy with this mostly-unnamed group of characters (nor should they; police killing racists don’t have a ton of interesting shades), using them instead as a litmus test for the rest of society; Angela’s anger, her boss Judd’s resigned indifference… Watchmen‘s pilot episode smartly uses the Kavalry’s pseudo-cultism as a mirror for the rest of society, like the Guilty Remnant, on a much larger (but equally white) scale.

It makes for an engrossing pilot, one drenched in overt symbolism – Lindelof’s obsession with black and white contrast is front and center once again – and layered with allegory, using Watchmen‘s twisted reality as a backdrop for subtle ruminations on the essence of identity, and how a mask can complicate, confuse – and ultimately, dangerously mislead – one into thinking themselves a right, just person. It’s telling the most innocuous, lovable character in the first episode – Don Johnson’s Judd – ends up a lynched coke addict by the end of the first hour; you just never can know what a person is capable of when the tables are turned, either for or against them. Maybe Judd was in the Kavalry, maybe he wasn’t: but the power structure he supported certainly let the Kavalry rise again in society, his position of power and influence co-opted by the powers above and around him, in ways he may not even understand.

(Though given all the Oklahoma references, I tend to believe the literal text: after all, Jud was the bad guy in the musical).

That’s what “It’s Summer and We’re Running Out of Ice” does best, and why it has such massive potential as a series: rich text, matched with equally dimensional characters, set on a societal backdrop packed with allegory, satire, and theological exploration (with the brief image of Dr. Manhattan, we’re reminded this world does have actual gods in them). Though only in its first hour, Watchmen almost immediately cements its place as one of the year’s most fascinating series, the rare Peak TV drama with a distinct point of view, one it is willing to explore to any uncomfortable extreme, no matter how challenging it may be, to audience and creator alike.

Lindelof’s work always contends with the spaces between; between good and evil, between love and hate, mysticism and religion, science and faith – and of course, parent and child, which explains why Silk Spectre is one of three returning characters from the original work. With Watchmen, Lindelof, Kassell, and company are adapting those sensibilities into one of the most lauded, influential works of fiction from the 20th century; and, if the pilot is any sign, they’re stuffing all of those ideas and ruminations into an impressively dense, esoteric dramatic work.

Given all that, one might think “It’s Summer and We’re Running Out of Ice” is almost unwatchably thick, like each scene is covered in a sheen of thematic molasses (I’d argue The Leftovers first few episodes suffer from this). But it doesn’t, utilizing quietly powerful performances from King, Johnson, and Jeremy Irons (who I assume is playing a still-alive Ozymandias? there’s a lot to unpack with his isolated presence) to drive a surprisingly straightforward script. Yeah, there’s a hailstorm of baby squids, massacre of cattle by way of rail gun, and a brief cameo from the Nite Owl ship, but for the most part, Watchmen plays its cards directly on the table, finding its genius in the way those parts are arranged and presented to what is bound to be a massive audience.

It’s a smart play for the first episode, one that will allow Watchmen more freedom moving forward as it makes its way around the world of costumed and unmasked people in its world (I’m really looking forward to seeing more of Tim Blake Nelson’s Looking Glass, the most visually evocative character in the first episode). The universe of Watchmen is bound to get weirder and more outlandish as its story continues; with such a pitch-perfect first hour, however, that license is deserved, and welcomed.

Welcome to Watchmen reviews! I’ll also be appearing on our new Watchmen podcast, hosted by Simon Howell – you can catch the first episode for that later this week.

Did I mention the score slaps? Because man, the score fucking slaps. Trent Reznor and Atticus Ross really give this show a definitive sound in its first hour.

There’s an interesting juxtaposition of police abusing their power, and a group dedicated to protecting society, utterly powerless to do so: in this world, the police have to call and get permission to have their guns unlocked from their holsters – there are specific laws and articles written for extended unlocked periods for the entire force.

Tulsa is not the only tragedy alluded to in “It’s Summer and We’re Running Out of Ice”; besides the squid rain (a reminder of Ozymandias’ fake alien attack that killed 3 million people and ended the Cold War), Angela talks about how the police started wearing masks after the Kavalry targeted police for killings.

The power of propaganda: lithium batteries are supposed to be cancer-giving, which is why they’ve been removed from society, and being stockpiled by the Kavalry, for unknown reasons.

“There will be no more justice today. Trust in the law.” What an interesting, seemingly contradictory catchphrase for a movie hero.

“Were there any croutons?” Watchmen is devastating, bleak and serious – but it also has small moments of levity like this joke, which help give the series a bit of balance (again, lessons learned from the first episode of The Leftovers, which was all depressing string music, forlorn faces, and packs of murderous dogs. A little light goes a long way, even if the future is not necessarily bright (as the sign seen in this episode suggests).

‘Bojack Horseman’ S6 Offers Salvation While Building to a Reckoning