Connect with us
Bojack Horseman finally offers its eponymous Horseman a chance at real redemption in season 6 while also threatening his ultimate reckoning.

The ultimate arc of Bojack Horseman has always been about the idea of change. Specifically the Netflix dramedy has focused on its titular character in regard to change, and whether he can actually do it. Season 6 has given him his best chance at finally becoming a decent person but it also threatens him with the kind of reckoning that could be his utter undoing.

As Bojack (Will Arnett) completes his journey through rehab, he emerges out the other side more scared than ever that he might be unable to effect a real change in his life. This fear is not some gross extrapolation either. As longtime viewers will no doubt remember Bojack had seemed to have found hope for redemption many times before, only to backslide into toxic behavior and bad decisions anew.

This time, however, with the tools and introspection necessary to see who he his, what he’s become, and what has actually brought him to this point, Bojack could really make a go of it this time. The season premiere sees him tracing his addiction, and its source, all the way back to his childhood and his very first drink, after his parents left out a bottle of vodka during a drunken fight.

This penchant for darkness amid all of its animal puns and screwball comedy has always been one of Bojack Horseman‘s greatest strengths. For too long mental illness and addiction have been treated in popular media as something that can be overcome by a single grand revelation or life-changing experience. These issues are generally far more complicated in real life.

Even as Bojack finds his way through the darkness though, something awful begins to build on the horizon. The season finale, an episode bereft of any of the central cast members, sees a small coalition of the people Bojack has wronged gradually coalescing into a threat that could destroy him for good. Forced to face those he has hurt with his bad behavior over the years as legion, can Bojack finally face his past with conviction and understanding, or will he crumble into self-loathing and addiction one final time?

This seems to be the real question of the first part of Bojack Horseman‘s final season: whether the characters we’ve followed for all of these years can finally attain something resembling real happiness and contentment. Elsewhere in the cast, Diane settles into a stable life with a supportive boyfriend and the book deal she’s always dreamed of, only to fall into a floundering depression. 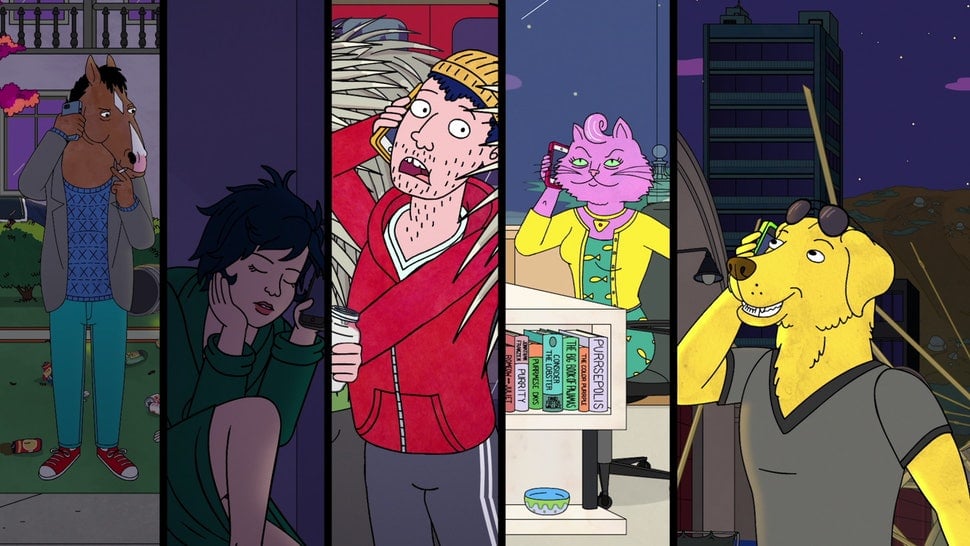 Meanwhile, in a classic juxtaposition for his character, Mr. Peanutbutter becomes the national face of depression as part of a scheme by Princess Caroline to save his reputation. In alignment with the themes of the season, the new face of SAD DOG is forced to face up to his infidelities from last season, but the strategy he and Pickles use to solve things may be the worst idea Mr. Peanutbutter has ever had, and that’s saying something.

It might seem a bit pedantic to go through each character piece by piece like this, but much of Bojack Horseman season 6 does just that, with 5 of the 8 episodes focusing on a specific character from the central cast and following them through a slice of their lives. This approach, while formulaic, works surprisingly well for the show, creating a familiar yet ever-changing tapestry for creator Raphael Bob-Waksberg to begin tying up the loose ends for his characters.

Rounding things out, we see Princess Caroline struggling to find a self-care baseline amid her workaholism, and Todd still looking for his place in the world and role that can fulfill his wacky sensibilities. The voice cast, including Alison Brie, Paul F. Tompkins and Amy Sedaris, is fantastic as usual, with every actor so comfortable in their roles by now that they always make the characters work, even as they face new challenges.

Much of the credit for this must, of course, go to the writers room of Bojack Horseman, a team which has been responsible for the most consistently funny animated comedy since the first decade of The Simpsons. Only Adult Swim’s Rick and Morty can give Bojack a run for its money, and that too is only due to its careful balancing act between wacky hijinks and sobering truths.

Still, the laughs keep coming a mile a minute, often as background gags or throwaway lines, and that helps the audience to digest the heady and sometimes disturbingly accurate evolution and devolution of Bojack‘s cast. Troubled as they are, these are still very likeable characters, and we don’t want to watch them suffer too much, at least not without the occasional balm of some show business satire or corporate takeover absurdity.

All in all, Bojack Horseman continues the strong trajectory from season 4 and 5, cementing the show as one of the best and most consistent comedies on not just Netflix but all of television. With the rest of season 6 arriving in January, let’s hope our favorite horse person can finish off strong in 2020.

Watchmen Season One Episode 1 Review: “It’s Summer and We’re Running Out of Ice”