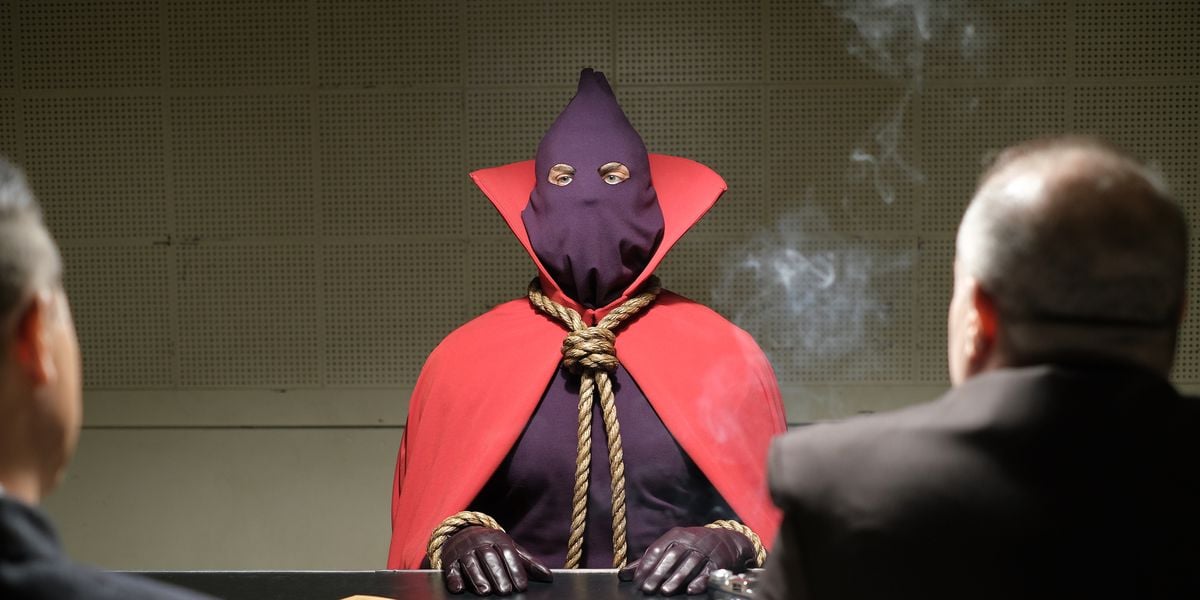 Where do we hide our greatest secrets, our most damning personal memories – and are they even something we can really hide at all? “Martial Feats of Comanche Horsemanship,” Watchmen‘s terrific second hour, spends much of its time pondering about this question. It seems a simple idea; Angela wears a mask, Judd hides his Klan outfit, and Will simply talks around the facts of his life and circumstances. But what makes “Martial Feats,” and the young drama as a whole, so effective is how it pushes past those simple answers, for questions larger and more complicated: America refusing to acknowledge the Tulsa massacre in history books, Angela’s adoption of her dead partner’s children – and of course, the indisputable connections between white supremacist movements and their quiet power in America’s institutions, yet one of many ugly stains our country (both in Watchmen, and in our own world) try to ignore and distract from, waving the flag and touting off about blue lines and who gets to cross them.

Though occasionally awkward in its delivery, “Martial Feats of Comanche Horsemanship” is a remarkably strong second episode for Watchmen, continuing to build out a world mere inches away from our own.

It’s stunning to see a series brave enough to cross that blue threshold, and challenge the fundamental truths we assume about law and justice; specifically, that it is objectively clear eyed, even handed, and honest. The mere existence of the Seventh Kavalry after massacring an entire police department, however, suggests something different – and watching Angela, Wade, and the department seek “justice” for a killer Angela knows isn’t in Nixonville only further complicates the nature of the police, who now wear masks while running around with their electronic gun safeties off (half of these things the police in our world already do).

If there’s a knock against “Martial Feats of Comanche Horsemanship,” it is how these ideas are awkwardly worked in some conversations (I’m looking at you, scenes inside Angela’s “bakery”) – but taken as a whole, Watchmen‘s second hour is another master class in building out its sardonic world. The police of Watchmen are bitter and afraid, a deadly combination for those touting the power of the written law behind them; Angela’s speech about everything being “black and white” to her adopted son might be groan-worthy in its on the nose-ness, but it’s an apt description for the police of this world (and ours) to take: everyone who isn’t a hero, is an enemy – and anyone who isn’t innocent is immediately guilty, an idea Angela wrestles with, even before discovering the crisp, well-lit linens hidden in her mentor’s closet (which she discovers by faking an illness at his wake, a juicy little mini-morality play Watchmen tucks underneath its surface-level mystery).

Like a LOST episode, “Martial Feats” utilizes a few timely flashbacks to inform the present; specifically, the White Night attack and immediate aftermath, a Christmas holiday destroyed by the Kavalry’s violent uprising. With it, we get some fine ass world building; from her (adopted) children to the close relationship between Judd and Angela, “Martial Feats of Comanche Horsemanship” continues to build a fascinating protagonist with Angela, one whose cold, calculated approach to the truth is informed by her tragic past – and more importantly, complicated by her present state of affairs, a cop who adorns herself in Catholic symbolism to skirt the law and pursue her notion of justice – except, of course, when it comes to arresting her enigmatic grandfather, who admits to Judd’s murder multiple times, only to be taken in when Angela doesn’t get her other questions answered.

Will’s character, and his increased prominence in this episode, is another engrossing catalyzation of the show’s central themes of family and heroism, and how complicated those seemingly simple ideas can be. Using the lens of history as a framing perspective, “Martial Feats of Comanche Horsemanship” paint a picture of a man (Will’s father, presumably) whose frustrations with his own country were verbalized in German propaganda – another fascinating little morality play, where a genocidal, racist regime turns out to have some strangely progressive views on race. Truthful or not, the words of the letter dropped on American soldiers held some truth for Will’s father, as it eventually became the infamous “Watch Over This Boy” note we see in the pilot’s opening moments.

There’s also the debut of American Hero Story on everyone’s televisions (including the Kavalry, as they begin to build what appears to be a suicide vest), perhaps the most fascinating sequence of the episode to dissect. Opening on a lengthy, overt “trigger warning” just about everyone in the world watching casually ignores, we’re then privy to one entire American Hero Story scene: the foiling of a grocery store robbery, retold in very Zack Snyder-ish fashion, all blood spurts, exaggerated slow motion, and a muted color palette highlighted by a hero’s costume and the image of glass shattering (in super slo-mo, of course). Brutal and garish, the sequence embodies the very heart of the series: when does heroism become evil, and when does free speech just become emboldening terrible people?

Though occasionally awkward in its delivery, “Martial Feats of Comanche Horsemanship” is a remarkably strong second episode for Watchmen, continuing to build out a world mere inches away from ours, with a celebrity president whose well-meaning gestures only belie the moral emptiness of the institutions still existing to protect the same people: those with money and power. The Kavalry may represent an immediate threat, but they’re but a drop in the violent bucket of systemic racism, society’s ultimate mask to hide the inter-generational betrayal, destruction, and rotting corruption at the heart of our institutions, and society.

Speaking of the episode’s strange title: the art piece this episode is titled after is quite striking. Seeing Native Americans, riding beautiful white horses, being slaughtered on white (and black) horses is an ingenious encapsulation of the season’s deeper themes. Where are the heroes? Why can’t we see their assailants? A lot to see

Oh yeah – this episode ends with Angela’s car being lifted into the air by a giant magnet attached to a plane (or helicopter). Will’s definitely got friends in high places.

Looking Glass doesn’t even take his mask off at home to eat dinner. That boy is both committed, and clearly torn about his role in everything that’s going on around him. What are you hiding, Wade?

Veidt/Ozymandias spends the episode staging a play, acted by two of his clone butlers, called “The Watchmaker’s Son,” which tells the story of Dr. Manhattan’s origins. There’s also talk of Dr. Manhattan when Will and Angela speak; they talk of a man who can be in two places at the same time, and has every imaginable power, except to change his own form into human. Interesting…

Robert Wisdom and Jim Beaver both appear briefly, as a newspaper stand owner and disgruntled grandfather (?), respectively. Watchmen is digging into the HBO character actor bench, which can only mean good things for what’s to follow.

Though this hour barely inches the plot forward, it gives the series so much emotional and thematic depth, it’s almost impossible to notice.

Exploring the Grey Morality of Watchmen

‘Bojack Horseman’ S6 Offers Salvation While Building to a Reckoning