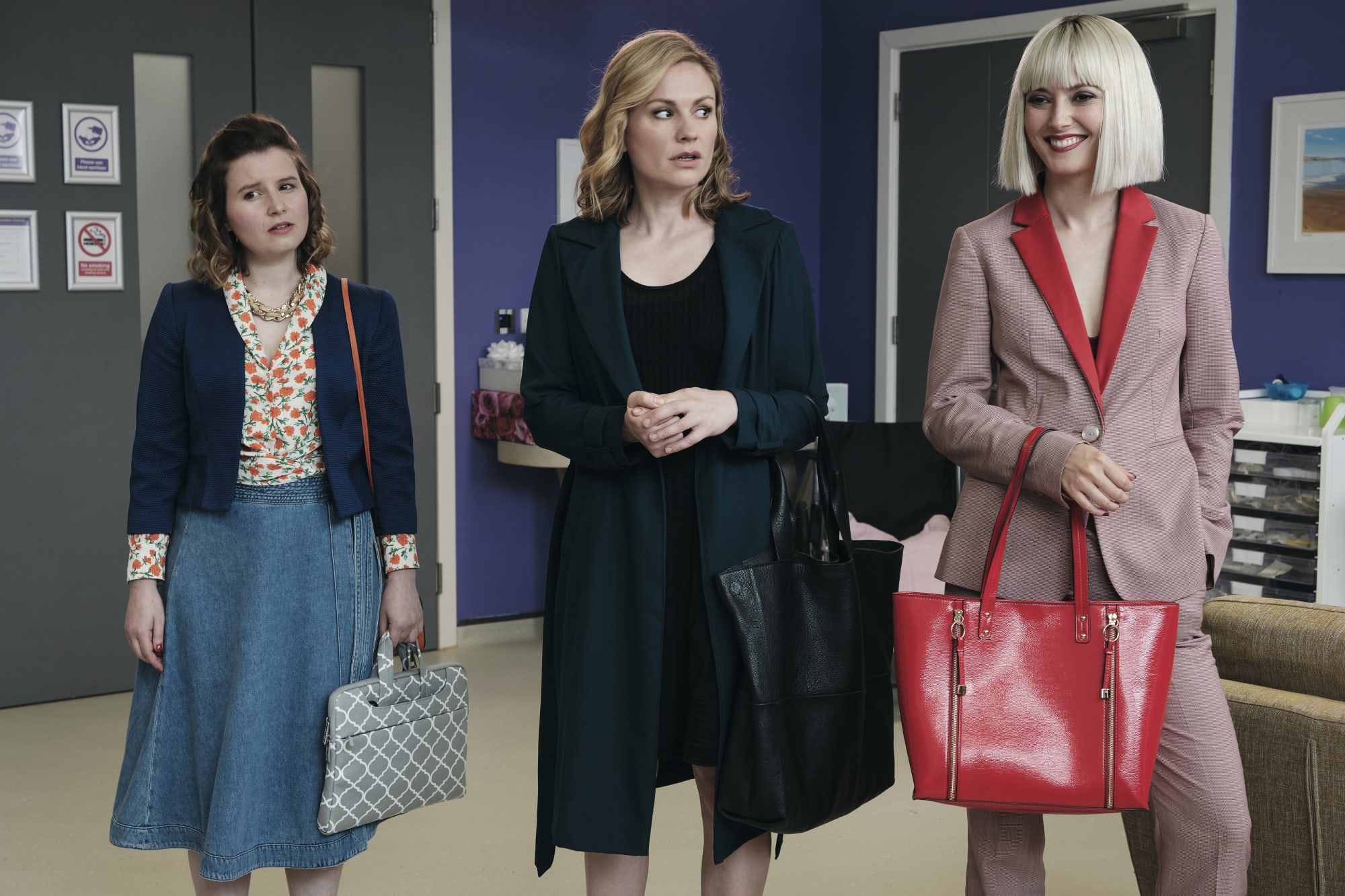 It’s Not a Scandal If Nobody Knows

Flack Season 2 takes on big themes like forgiveness, addiction, and mothers while the Mills Paulson team reins in one celebrity crisis after another.

Note: This review contains some spoilers for Seasons 1 and 2 of Flack.

Being good at taking care of other people’s messes doesn’t necessarily mean one’s own life is in order. This is the case for Robyn (Anna Paquin) on the extreme end of the hot mess spectrum. Her life is spinning out of control, and like a trainwreck, it’s hard to look away, but hers is a complicated trainwreck with issues that are worth taking a good, hard look at.

Much of the season shows the impact that Rob’s behavior and questionable decisions have on others, especially those close to her. It’s only a matter of time before the strain her actions put on her relationships cause them to break, sometimes irreparably so. This is the great tension of the show, the high drama coming from life’s low points, which is exhilarating to watch but can also be quite depressing.

“Apologies are a strange thing, aren’t they? Just expressions of shame.”

This season of Flack really examines the act of forgiveness. However, it focuses on those times where it backfires or when it’s just not possible to forgive. These are the most difficult moments of the series to get through because they are so heartbreaking.

At the start of the season, Rob’s sister Ruth (Genevieve Angelson) says she has not forgiven Rob, but she allows her to be around and gives her chance after chance. She has not forgiven her husband either and freezes him out, not even letting him in the house. “I can choose you. I can’t choose her” is her reasoning.

By the end, they switch places. Mark (Rufus Jones) has put in the work, shown genuine remorse, and made amends. Rob continues to “re-offend” to the point where Ruth is forced to cut ties for the sake of her own wellbeing and her family’s. Forgiveness is the act of the hurt party, but it is only effective when the offender acts in accordance with that forgiveness. Thus, the sisters arrive at a painful stalemate.

Their relationship is, by far, the most difficult to watch implode, but the destruction of others hurts as well. Rob’s ex-boyfriend is willing to move forward after she cheats and after she tells him that she’s pregnant but not sure who the father is. “Look, Rob, I haven’t forgiven you. That’s something you need to earn and that we can work on together,” he tells her.

Rather than work on it and talk things out, she vaguely says it’s too late and literally runs away. Rob might not give enough credit to those close to her—sharing and talking about her struggles would help, or, at least, put things in the right direction. Every chance Rob has to tell the truth or ask for help, she runs.

And she usually runs towards her addictions and vices.

Rob’s addiction is a horrible cycle of her punishing herself and hurting people in the process. At the beginning of Season 2, she makes an effort—going to meetings and working out—but the self-sabotage is evident. Rob still isn’t opening up to anyone and is trying to handle things all on her own. She replaces drugs and alcohol with exercise, but it’s easy to see that any hardship or misstep will cause a relapse. And since this is a drama series, the writing is on the wall that Rob’s downward spiral is inevitable.

“Check yourself before you wreck yourself, dear. Remember, a spiral looks the same from both ends.”

Although, Rob’s struggle with addiction is not the only depiction of an addict. It’s really interesting to see the parallels between Robyn’s addiction and Ruth’s eating disorder. When Mark confronts Ruth, she is defensive at first, but then she confides in him about how it started and how it felt. He sticks by her with love and compassion, and they can face it together, showing how talking to a trusted person about one’s problems can really help.

Unfortunately, Rob doesn’t see this as an option, so she falls faster and deeper down the hole of self-destruction, but she also has trouble seeing how this affects others. In Season 2 Episode 1, “Sofi,” Eve (Lydia Wilson) describes her colleague and friend thusly: “She’s Robyn. You know, good old dead-eyed, tight-lipped, drown everyone around you in a black sea of self-involved, self-destructive, self-pity Robyn.” It’s harsh but not inaccurate.
Flack gives us a glimpse of Robyn’s past in Season 2, shedding light on what might have put her on this path and her relationship with her mother.

“That’s the thing about mothers. They’re like terminators. They can’t be bargained with, they can’t be reasoned with, they don’t feel pity or fear or remorse, and it absolutely will not stop, ever, until you’re dead.”

Martha Plimpton is inspired casting in the role of Clara, Rob and Ruth’s mother, who committed suicide one year before the events of Season 1. It strengthens the story overall across both seasons and, in a way, foreshadows the end and the fate of Robyn.

The flashback scenes show Clara recently out of rehab and with a similar behavior to present day Rob—not want to burden her loved ones with her struggle but does not realize that it’s a burden anyway. There’s the guilt-tripping of those that try to monitor her, followed up with hollow apologies.

But you can also see the love. As difficult as these mother-daughter relationships are portrayed on the show, the love is there—that’s probably why they are so difficult. When Eve takes up with a tech billionaire and shows his true narcissistic colors, she can cut things off and move on (it makes for such a satisfying scene). Her mother’s behavior is also abhorrent, but Eve doesn’t tell her off and, instead, absorbs each bitter comment.

Another bummer parental relationship is that of Melody (Rebecca Benson) and her mother. Her father’s illness causes her to become clingy with Melody, which, in turn, suffocates her. Thank goodness for the funny and sweet portrayal of Caroline (Sophie Okenedo) in the mother (and grandmother) role—especially in contrast to her role as acerbic head honcho. Season 2 Episode 4, “Duncan,” has much-needed levity as Caroline attends her ex-husband’s funeral. This is very indicative of the series as a whole: the lighter moments come with a death.

Flack is a wild ride that uses celebrity catastrophes as the catalyst to examine the complexities of the human condition and relationships. Luckily, there is no shortage of fascinating, complex characters with which to take the ride; it makes the bumpy parts easier to process and the fun parts enjoyable. It’s a unique way to capture the chaos of human nature and to entertain as well.