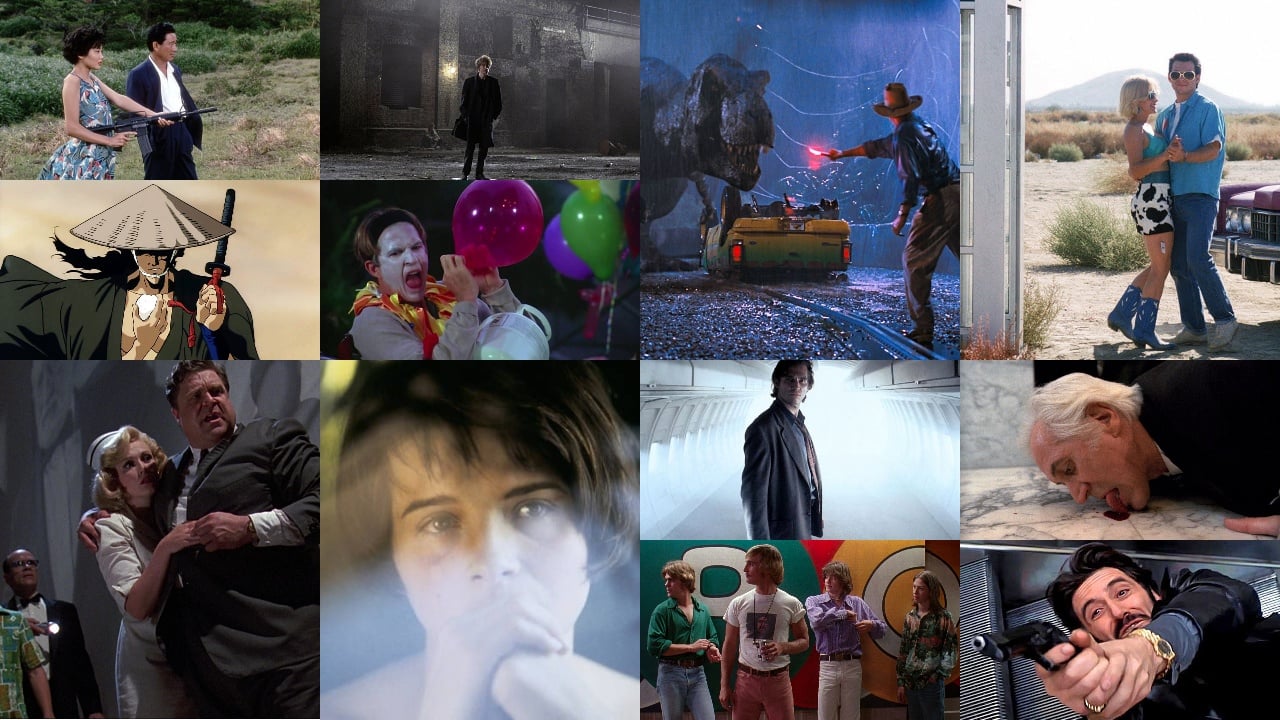 1993 was an epic year for pop culture. In fact, some would argue 1993 is the year that made geek culture cool. The first episode of The X-Files reached 12 million viewers and developed a cult following so loyal that there were more websites dedicated to the series than television in general. Wrestling fans were treated to the first episode of Monday Night Raw which aired live from the Grand Ballroom at the Manhattan Center in New York City, and it was also the year that Oprah Winfrey interviewed Michael Jackson during a live primetime special on ABC. 1993 marked the end of Saved by the Bells and David Letterman’s final late-night broadcast with NBC. Britney Spears, Justin Timberlake, and Christina Aguilera joined the cast of The New Mickey Mouse Club and it was the same year that Björk teamed up with Michel Gondry for her “Human Behavior” music video. Michael Bay was busy directing the Got Milk? commercials; the world was introduced to Beavis and Butt-Head and Home Improvement was somehow beating Seinfeld in ratings. Snoop Dogg released Doggystyle; kids were dropping quarters into NBA Jam like there was no tomorrow, and 1993 marked the last time the Montreal Canadians won the Stanley Cup. In August of 1993, Deadpool #1 hit store shelves; the hugely popular Knightfall storyline was introduced, and Mike Mignola’s Hellboy from Dark Horse Comics burst onto the scene. What year it was!

1993 was also … wait for it … a great year for movies! Steven Spielberg gave us two masterpieces; Robin Williams danced around in drag, and the husband-and-wife team of Rocky Morton and Annabel Jankel directed the Super Mario Bros. movie. All that said, 1993 is perhaps remembered most as the year Jurassic Park dominated the box office. A true phenomenon, its profits doubled those of the second most-watched movie in 1993, Mrs. Doubtfire. Yes, folks, 1993 was the year that dinosaurs were everywhere, but among the many Hollywood hits, there were plenty of great independent films and foreign language movies that found huge success worldwide. And while the best movie of 1993 may not be anywhere near as good as the best movie of 1990, 1991 nor 1992— overall, 1993 has possibly the strongest lineup in the decade yet.

That out of the way, here are the 30 best movies of 1993, each represented by one perfect screenshot. You can find my list of the best films of 1992 here.

30 Perfect Screenshots from the Best Movies of 1993

A vagabond swordsman is aided by a beautiful ninja girl and a crafty spy in confronting a demonic clan of killers – with a ghost from his past as their leader – who are bent on overthrowing the Tokugawa Shogunate.

Jack Skellington, king of Halloween Town, discovers Christmas Town, but his attempts to bring Christmas to his home causes confusion.

After a man suffering from schizophrenia is released from a mental institution, he attempts to get his daughter back from her adoptive family.

Butch, a escaped state prisoner from a Texas jail, kidnaps Philip, a young, impressionable boy. As they embark on a trip across the American Southwest together, a surprising bond grows between the convict and his captive, even as law enforcement forces slowly catch up with them. An honorable Texas Ranger, Red Garnett, understands Butch has a heart of gold, but must pursue him anyway out of duty to the law and a desire to protect the child.

26. Fearless
Director: Peter Weir
Some people are afraid of nothing.

A man’s personality is dramatically changed after surviving a major airline crash.

25. King of the Hill
Director: Steven Soderbergh
When the world turns upside down, the trick is coming out on top.

A young boy struggles on his own in a run-down motel after his parents and younger brother are separated from him in 1930s Depression-era Midwest.

24. A Bronx Tale
Director: Robert De Niro
A devoted father battles the local crime boss for the life of his son.

A father becomes worried when a local gangster befriends his son in the Bronx in the 1960s.

23. Matinee
Director: Joe Dante
Lawrence Woolsey presents the end of civilization as we know it. Make that… Proudly Presents!

Several yakuza from Tokyo are sent to Okinawa to help end a gang war. The war then escalates and the Tokyo drifters decide to lay low at the beach.

A mysterious device designed to provide its owner with eternal life resurfaces after four hundred years, leaving a trail of destruction in its path.

A New York City film director working on his latest movie in Los Angeles begins to reflect the actions in his movie and real life, especially when he begins an affair with the lead actress.

19. Batman: Mask of the Phantasm
Directors: Eric Radomski and Bruce Timm
The Dark Knight fights to save Gotham City from its deadliest enemy.

Batman is wrongly implicated in a series of murders of mob bosses actually done by a new vigilante assassin.

18. Romeo Is Bleeding
Director: Peter Medak
The story of a cop who wanted it bad and got it worse.

A womanizing, crooked cop on the payroll of the mafia is confronted with the reality of his double life after he is asked to kill a beautiful and ruthless Russian gangster.

Two friends, ex Shaolin monks, part ways as they brush with the ongoing rebellion against the government. The ambitious one rises up to be a powerful military commander, while his betrayed friend resorts to learn the calm ways of Tai Chi.

Having failed a secret mission for the Red Flower Society, Chinese folk hero Fong Sai Yuk (Jet Li) must try to get his hands on a special document by wooing the governor’s daughter, Man-Yin. This doesn’t sit well with his fiancée, Ting Ting, or with his martial arts-master mother. Fong enters a martial arts competition, where he faces off against the villainous Yu as he battles to restore the Ming Dynasty.

Upon arriving to a small town, a drifter is mistaken for a hitman, but when the real hitman arrives, complications ensue.

The plot centers on a masked martial artist known as Iron Monkey. Iron Monkey is actually the alter ego of a traditional Chinese medicine physician called Yang Tianchun. In the day, Yang runs his clinic and provides free medical treatment for the poor, which he subsidises by charging his rich patients.

13. Menace II Society
Directors: Albert and Allen Hughes
This is the truth. This is what’s real.

A young street hustler attempts to escape the rigors and temptations of the ghetto in a quest for a better life.

12. Farewell My Concubine
Director: Kaige Chen
The passionate story of two lifelong friends and the woman who comes between them.

The story of two men, who met as apprentices in the Peking Opera, and stayed friends for over 50 years.

In the mid-19th century, a mute woman is sent to New Zealand along with her young daughter and prized piano for an arranged marriage to a wealthy landowner, but is soon lusted after by a local worker on the plantation.

9. Groundhog Day
Director: Harold Ramis
He’s having the day of his life…over and over again.

A weatherman finds himself inexplicably living the same day over and over again.

Dr. Richard Kimble, unjustly accused of murdering his wife, must find the real killer while being the target of a nationwide manhunt led by a seasoned U.S. Marshal.

In German-occupied Poland during World War II, industrialist Oskar Schindler gradually becomes concerned for his Jewish workforce after witnessing their persecution by the Nazis.

6. Dazed and Confused
Director: Richard Linklater
It was the last day of school in 1976, a time they’d never forget… if only they could remember.

The adventures of high school and junior high students on the last day of school in May 1976.

5. Carlito’s Way
Director: Brian De Palma
Sometimes, when you want to come clean, you have to play dirty.

A Puerto Rican former convict, just released from prison, pledges to stay away from drugs and violence despite the pressure around him and lead on to a better life outside of N.Y.C.

4. True Romance
Director: Tony Scott
Not since Bonnie and Clyde have two people been so good at being bad.

In Detroit, a lonely pop culture geek marries a call girl, steals cocaine from her pimp, and tries to sell it in Hollywood. Meanwhile, the owners of the cocaine, the Mob, track them down in an attempt to reclaim it.

A woman struggles to find a way to live her life after the death of her husband and child.

Parallel tales of two sexually obsessed men, one hurting and annoying women physically and mentally, one wandering around the city talking to strangers and experiencing dimensions of life.

1. Jurassic Park
Director: Steven Spielberg
The most phenomenal discovery of our time… becomes the greatest adventure of all time.

A pragmatic paleontologist visiting an almost complete theme park is tasked with protecting a couple of kids after a power failure causes the park’s cloned dinosaurs to run loose.