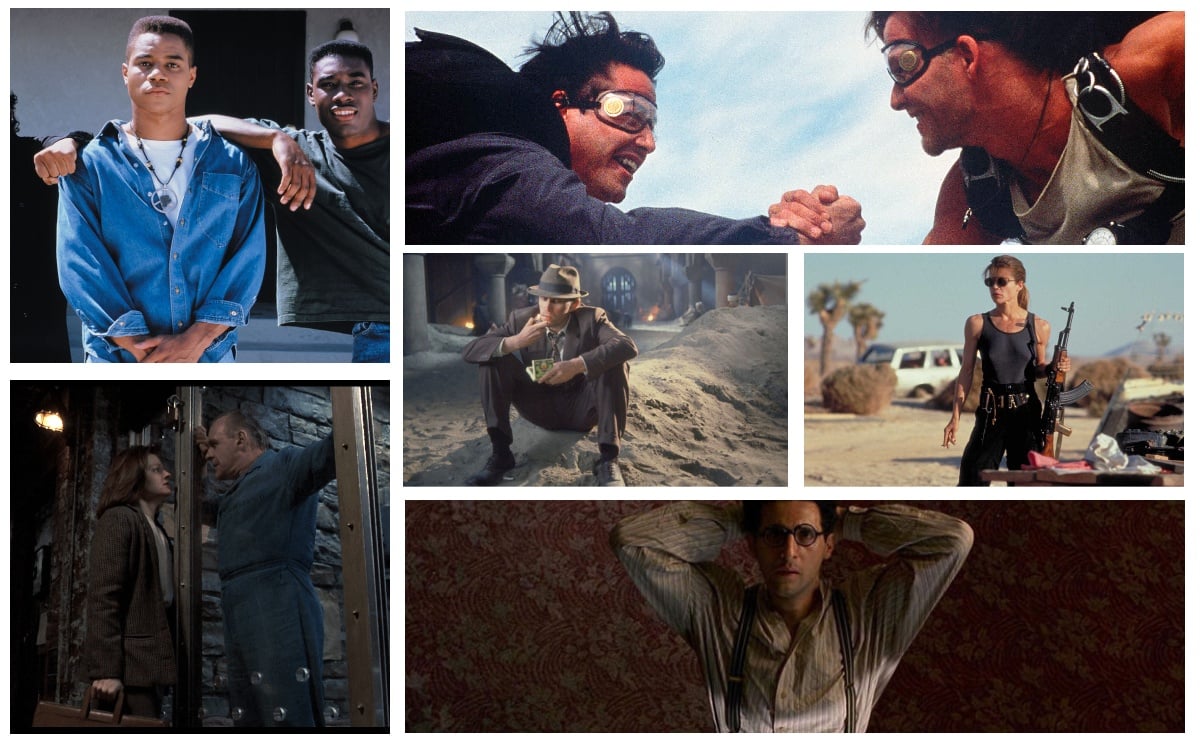 1991 saw a massive artistic shift in pop culture. It was the year that grunge rock found commercial success due to releases such as Nirvana’s landmark album Nevermind, Pearl Jam’s Ten, Soundgarden’s Badmotorfinger, and Stone Temple Pilots’ Core. The success of these bands boosted the popularity of alternative rock and made grunge the most popular form of rock music at the time while sending fashion into a tailspin. Roseanne finally overtook Cheers as the number one sitcom on television and the long-running prime-time soap opera Dallas came to an end after fourteen seasons. 1991 also marked the start of the 16-bit era when Nintendo released the Super NES, and SEGA released Sonic the Hedgehog on the Genesis. It was a time when kids lined up at arcades to play Street Fighter II and the year the first website was made as the World Wide Web became a publicly available service. Adam Sandler became a featured player on Saturday Night Live; Johnny Carson announced he would retire from the Tonight Show; Michael Jordan and the Chicago Bulls won their second NBA championship, and Magic Johnson retired after revealing that he had tested positive for HIV.

1991 was also a great year for movies. James Cameron’s Terminator 2: Judgment Day topped the box office and it was the first time a horror film (Silence of the Lambs) swept the Oscars. Joel and Ethan Coen jumped into the scene winning the Palme d’Or for Barton Fink and Todd Haynes won the Grand Jury Prize at Sundance for his feature directorial debut, Poison— a movie which is now regarded as a seminal work of New Queer Cinema.

1991 was the year that John Singleton took us deep into the dangerous streets of the Crenshaw ghetto of Los Angeles, while over on the east coast, Mario Van Peebles showed us how two unorthodox police officers brought down a drug gang at the height of New York City’s crack cocaine epidemic. Meanwhile, Keanu Reeves starred in his first action film, David Cronenberg had audiences scratching their heads over The Naked Lunch, and plenty of international filmmakers such as Lars Von Trier and Edward Yang began finding success stateside.

1991 was indeed a great year for cinema and after careful consideration, I’ve whipped up a list of the 30 best movies released that year.

That out of the way, here are the 30 best movies of 1991, each represented by one perfect screenshot. You can find my list of the best films of 1990 here.

30 Perfect Screenshots from the Best Movies of 1991

A young man living in poverty makes a plan to rob a drug dealer and change the life of his family.

29. The People Under the Stairs
Director: Wes Craven

In every neighborhood there is one house that adults whisper about and children cross the street to avoid.

Two adults and a juvenile break into a house occupied by a brother and sister and their stolen children. There, they must fight for their lives.

It was a time that there was a new gangster in………

A crime lord ascends to power and becomes megalomaniacal while a maverick police detective vows to stop him.

Somebody said get a life… so they did.

Two best friends set out on an adventure, but it soon turns around to a terrifying escape from being hunted by the police, as these two girls escape for the crimes they committed.

There is nothing in the dark that isn’t there in the light. Except fear.

A convicted rapist, released from prison after serving a fourteen-year sentence, stalks the family of the lawyer who originally defended him.

One of the strangest little films of 1991.

A young man with superhuman strength is incarcerated at a prison run by corrupt officials and seeks to use his martial arts to clean up the system.

To solve a mystery he will enter a nightmare.

Kafka works during the day at an insurance company, where events lead him to discover a mysterious underground society with strange suppressive goals.

With a serial strangler on the loose, a bookkeeper wanders around town searching for the vigilante group intent on catching the killer.

21. Once Upon a Time in China
Director: Hark Tsui

Never was a Hero needed more…

20. Once A Thief
Director: John Woo

They only stop to reload.

A romantic and action packed story of three best friends, a group of high end art thieves, who come into trouble when a love-triangle forms between them.

The final sixty-seven days of Van Gogh’s life are examined.

18. The Lovers on the Bridge
Director: Leos Carax

Romance… In a most unlikely place.

Alex, who’s homeless and addicted to alcohol, and Michèle, who’s losing her sight, form a relationship while sleeping rough on Paris’s Pont-Neuf bridge.

Friends and family of a married black architect react in different ways to his affair with an Italian secretary.

They Had Absolutely Nothing. But They Were Willing To Risk It All.

When Jimmy Rabbitte wants to start a band, he has open auditions at his house.

15. Beauty and the Beast
Directors: Gary Trousdale and Kirk Wise

The most beautiful love story ever told.

A prince cursed to spend his days as a hideous monster sets out to regain his humanity by earning a young woman’s love.

27 banks in three years. Anything to catch the perfect wave!

An F.B.I. Agent goes undercover to catch a gang of surfers who may be bank robbers.

A former radio DJ, suicidally despondent because of a terrible mistake he made, finds redemption in helping a deranged homeless man who was an unwitting victim of that mistake

Each of us is matched somewhere in the world, by our exact double – someone who shares our thoughts and dreams.

Two parallel stories about two identical women; one living in Poland, the other in France. They don’t know each other, but their lives are nevertheless profoundly connected.

The Story That Won’t Go Away

Post-apocalyptic surrealist black comedy about the landlord of an apartment building who occasionally prepares a delicacy for his odd tenants.

After developing an addiction to the substance he uses to kill bugs, an exterminator accidentally kills his wife, and becomes involved in a secret government plot being orchestrated by giant bugs in a port town in North Africa.

Once upon a time in South Central L.A. … It ain’t no fairy tale.

Just after W.W.II, an American takes a railway job in Germany, but finds his position politically sensitive with various people trying to use him.

A renowned New York playwright is enticed to California to write for the movies and discovers the hellish truth of Hollywood.

Based on a true story, primarily on a conflict between two youth gangs, a 14-year-old boy’s girlfriend conflicts with the head of one gang for an unclear reason, until finally the conflict comes to a violent climax.

A cyborg, identical to the one who failed to kill Sarah Connor, must now protect her teenage son, John Connor, from a more advanced and powerful cyborg.

Two best friends living on the streets of Portland as hustlers embark on a journey of self discovery and find their relationship stumbling along the way.

1. The Silence of the Lambs
Director: Jonathan Demme

A young F.B.I. cadet must receive the help of an incarcerated and manipulative cannibal killer to help catch another serial killer, a madman who skins his victims.

Share
Tweet
Reddit
Share
Email
WhatsApp
Pin
More
51 Shares
In this article:A Brighter Summer Day, Barton Fink, Beauty and the Beast, Boyz in the Hood, Cape Fear, Center Stage, Delicatessen, Europa, JFK, Jungle Fever, Kafka, La double vie de Véronique, Madonna: Truth or Dare, My Own Private Idaho, New Jack City, Once A Thief, Once Upon a Time in China, Point Break, Riki-Oh: The story of Ricky, Shadows and Fog, Terminator 2: Judgment Day, The Commitments, The Fisher King, The Lovers on the Bridge, The Naked Lunch, The People Under the Stairs, The Rapture, The Silence of the Lambs, Thelma & Louise, Van Gogh
Up Next: