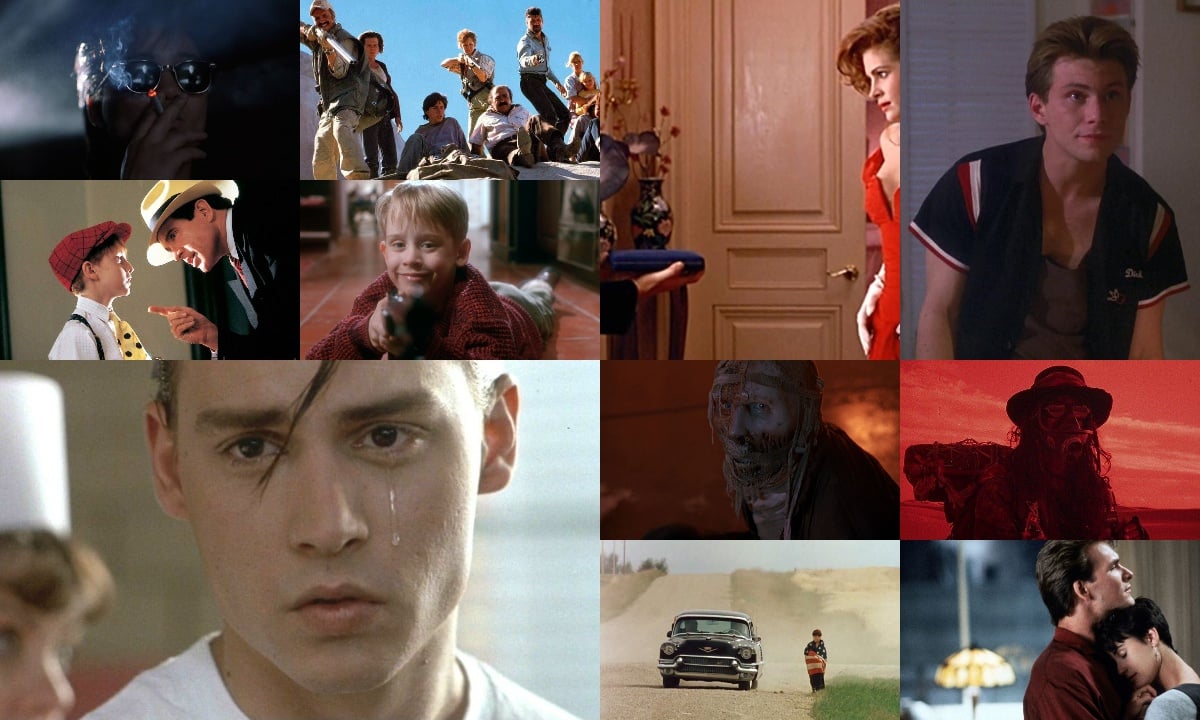 To say that 1990 was an important year for pop culture, would be an understatement. It was the year Twin Peaks premiered on ABC-TV with a 21.7 rating and was viewed by 34.6 million people. MTV’s Unplugged was broadcast for the first time; Will Smith entered America’s living rooms with Fresh Prince of Bel-Air, and Cheers was still the number one show with Roseanne not far behind in ratings. Nintendo released Super Mario Bros. 3 in North America (arguably the best video game of the 8-bit generation) and later that year the company released the Super Famicon in Japan, easily the best video game system of the decade. M.C. Hammer was teaching kids how to dance; Paula Abdul was tearing up the Billboard charts and Milli Vanilli was busy making millions by stealing other people’s music. Oh yeah, it just so happened to be the same year that Tim Berners-Lee created the first web server and the foundation for the World Wide Web.

1990 was also a truly remarkable year for movies. David Lynch’s Wild at Heart won the Palme d’Or; Kevin Costner’s Dances with Wolves won the Academy Award for Best Picture and Julia Roberts; Patrick Swayze and Macaulay Culkin became the biggest stars on the planet thanks to three movies that shattered box-office records.

By the time it had run its course in theaters, Home Alone was the third-highest-grossing film of all time worldwide; while Pretty Woman became Disney’s highest-grossing R-rated release ever. But it was Jerry Zucker’s Ghost that became the unexpected biggest hit of 1990, grossing over $505.83 million on a budget of $22 million.

1990 also gave us what is arguably Martin Scorsese’s best movie (Goodfellas); two of the best comic book movies ever made (Dick Tracy and Darkman), and a slew of great horror films. It was also the year that introduced me to plenty of international filmmakers such as Wong Kar Wai, Abbas Kiarostami, and Luc Besson, to name a few.

When I initially sat down to write this article, I intended on selecting only ten movies but once I started listing my favourites, I just couldn’t help but expand the number of recommendations to thirty-five films.

Normally, in the past, I would write one capsule review for each film but since I plan on releasing a list for every other year in the decade, I’ve instead decided to simply include one screenshot along with the official plot synopsis courtesy IMDB.com. Sorry guys, but these lists are time-consuming and I’ve come to quickly learn that most people don’t bother reading every capsule review either way— so why bother?

That out of the way, here are the 35 best movies of 1990, each represented by one perfect screenshot.

36 Perfect Screenshots from the Best Movies of 1990

They say lightning never strikes twice… They were wrong

Who knew it was so much fun to be a hooker?

A man in a legal but hurtful business needs an escort for some social events, and hires a beautiful prostitute he meets… only to fall in love.

An ex-con’s first act of freedom is moving to Miami where he restarts his old criminal ways with even more potency.

Their turf. Their game. Their rules. They didn’t count on HIS law…

The comic strip detective finds his life vastly complicated when Breathless Mahoney makes advances towards him while he is trying to battle Big Boy Caprice’s united mob.

Before Sam was murdered he told Molly he’d love and protect her forever.

After a young man is murdered, his spirit stays behind to warn his lover of impending danger, with the help of a reluctant psychic.

This fact-based movie follows the life of the twin crime-lords in London’s ’60s underworld.

I was feeling blue, but I’m better now.

A young witch, on her mandatory year of independent life, finds fitting into a new community difficult while she supports herself by running an air courier service.

A family comedy without the family.

An eight-year-old troublemaker must protect his house from a pair of burglars when he is accidentally left home alone by his family during Christmas vacation.

We warned you. Remember the rules. You didn’t listen.

The Gremlins are back, and this time, they’ve taken control of a New York City media mogul’s high-tech skyscraper.

The most frightening thing about Jacob Singer’s nightmare is that he isn’t dreaming.

Mourning his dead child, a haunted Vietnam War veteran attempts to uncover his past while suffering from a severe case of dissociation. To do so, he must decipher reality and life from his own dreams, delusions, and perceptions of death.

Inside everyone is a frontier waiting to be discovered.

Lieutenant John Dunbar, assigned to a remote western Civil War outpost, befriends wolves and Indians, making him an intolerable aberration in the military.

An adventure in obsession…

A thinly fictionalized account of a legendary movie director, whose desire to hunt down an animal turns into a grim situation with his movie crew in Africa.

In the 1950’s, a young boy living with his troublesome family in rural USA fantasizes that a neighboring widow is actually a vampire, responsible for a number of disappearances in the area.

They say there’s nothing new under the sun. But under the ground…

Natives of a small isolated town defend themselves against strange underground creatures which are killing them one by one.

The Voice of a Generation.

Mark runs a pirate radio station and causes an uproar when he speaks his mind and enthralls fellow teens.

After a famous author is rescued from a car crash by a fan of his novels, he comes to realize that the care he is receiving is only the beginning of a nightmare of captivity and abuse.

A man tries to find out who his real mother is after the woman who raised him tells him the truth.

When Harry comes to town, he brings good times, bad times… And a lot of trouble!

A charismatic old acquaintance drifts into town, stirring up trouble for a mild-mannered family.

In 1950s Baltimore, a bad boy with a heart of gold wins the love of a good girl, whose boyfriend sets out for revenge.

The head of a cyborg reactivates, rebuilds itself, and goes on a violent rampage in a space marine’s girlfriend’s apartment.

Young lovers Sailor and Lula run from the variety of weirdos that Lula’s mom has hired to kill Sailor.

An ex-boxer is drifting around after escaping from the mental hospital. He meets a widow who convinces him to help fix up the neglected estate her ex-husband left. Her Uncle talks them both into helping kidnap a rich boy for ransom money, and the ex-fighter must make decisions about his loyalties and what is right.

Up is down, black is white, and nothing is what it seems.

Tom Reagan, an advisor to a Prohibition-era crime boss, tries to keep the peace between warring mobs but gets caught in divided loyalties.

Finally… A film about the downwardly mobile.

A group of young upper-class Manhattanites are blithely passing through the gala debutante season, when an unusual outsider joins them and stirs them up.

What would you do if someone stole your mind?

When a man goes for virtual vacation memories of the planet Mars, an unexpected and harrowing series of events forces him to go to the planet for real.

A brilliant scientist left for dead returns to exact revenge on the people who burned him alive.

Having a ball…wish you were here

A chronicle of New York’s drag scene in the 1980s, focusing on balls, voguing and the ambitions and dreams of those who gave the era its warmth and vitality.

Where “Scarface” left off… “King of New York” begins.

A drug kingpin is released from prison and seeks to take total control of the criminal underworld in order to give back to the community.

Forget Everything You Have Ever Seen

A former circus artist escapes from a mental hospital to rejoin his armless mother – the leader of a strange religious cult – and is forced to enact brutal murders in her name as he becomes “her arms”.

A disillusioned assassin accepts one last hit in hopes of using his earnings to restore vision to a singer he accidentally blinded, only to be double-crossed by his boss.

The story of an uncommonly gentle man.

An artificial man, who was incompletely constructed and has scissors for hands, leads a solitary life. Then one day, a suburban lady meets him and introduces him to her world.

Do you dare walk these steps again?

A police Lieutenant uncovers more than he bargained for as his investigation of a series of murders, which have all the hallmarks of the deceased Gemini serial killer, leads him to question the patients of a psychiatric ward.

The true story of Hossain Sabzian that impersonated the director Mohsen Makhmalbaf to convince a family they would star in his so-called new film.

A new kind of lethal weapon

Convicted felon Nikita, instead of going to jail, is given a new identity and trained, stylishly, as a top secret spy/assassin.

2. The Cook, the Thief, His Wife & Her Lover
Director: Peter Greenaway

The wife of an abusive criminal finds solace in the arms of a kind regular guest in her husband’s restaurant.

Three Decades of Life in the Mafia.

The story of Henry Hill and his life in the mob, covering his relationship with his wife Karen Hill and his mob partners Jimmy Conway and Tommy DeVito in the Italian-American crime syndicate.