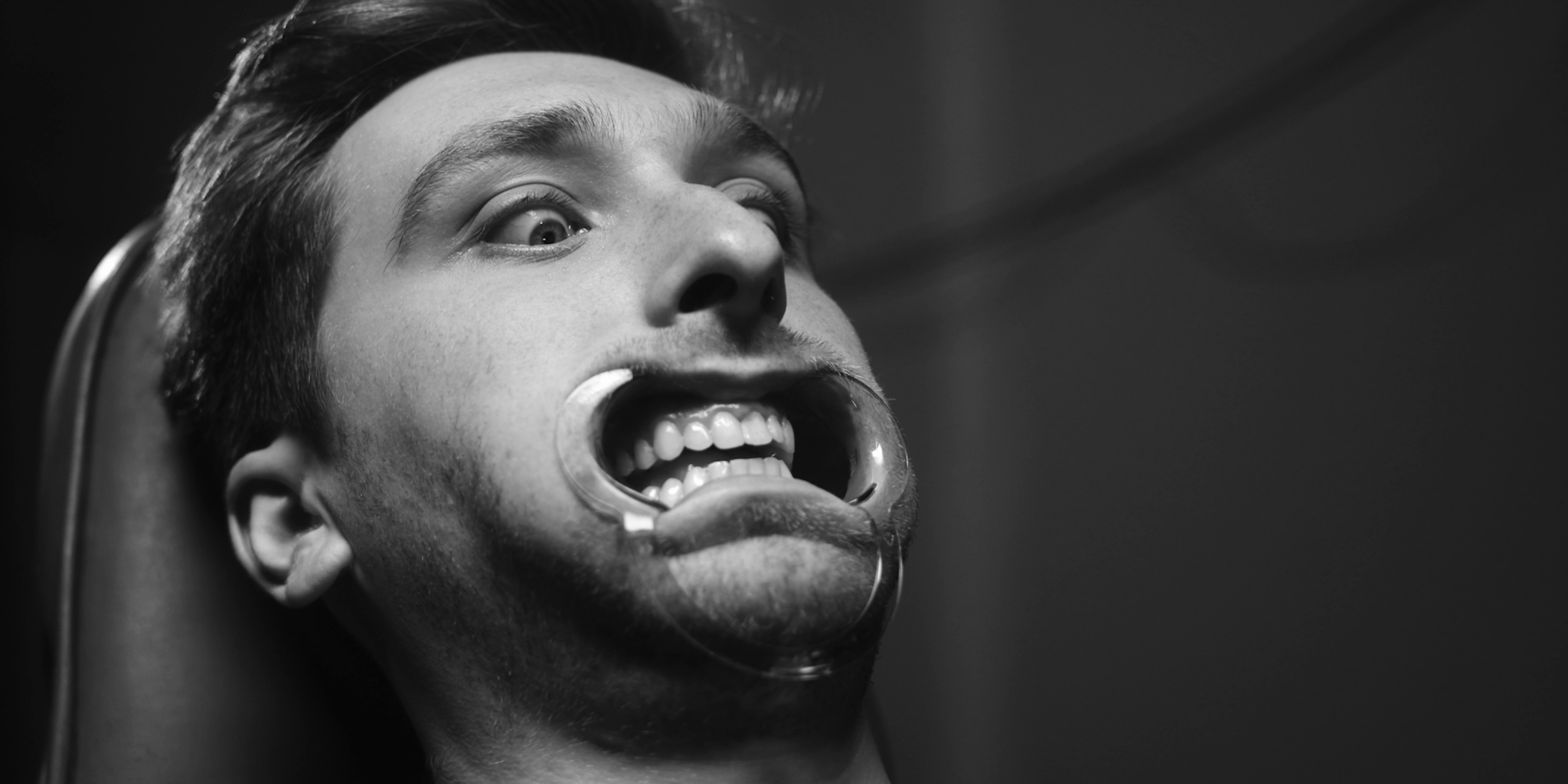 The Fantasia International Film Festival plays host to some of the most interesting short films that often feel like the precursor to something greater for the directors and writers involved. Whether it’s genre-fare, silly fecal humor, or just capturing a feeling, the shorts below are all worth checking out for one reason or another. While this is only a small sample of what this year’s Fantasia Film Festival has had to offer, you can also check out more reviews of shorts like Don’t Text Back, Dead Birds, You Wouldn’t Understand, and more as the festival continues.

Sometimes you watch a short film that you just know deserves the full feature treatment. Films like Mama and Lights Out were well-executed shorts that felt like they could be expanded upon more or just live on forever as a cool proof-of-concept. Abracitos is another one of those shorts that is stunning in its execution and feels like the opening scene of a feature film, before the title card hits. Taking place in one location over the span of 11 minutes, Tony Morales’ short film is chilling and contains one of the best scares in recent memory.

The premise is deceitfully simple: Laura (Beatriz Salas) gets a devastating phone call that has her rushing to Ainara’s (Carmen Salas) room. Rattled, the two try to escape the bedroom and avoid a malevolent presence. While simplistic, there’s so much that can be mined from the short film and expanded upon that I’m more saddened that it isn’t a feature film yet. Abracitos ends with such a traumatic scare that it feels almost at home in The Conjuring or some other big name horror movie. Specifically its use of Ainara, a young child, gives it that feeling of innocence in danger. Highly recommended for horror fans as a great example of getting the most out of very little.

Audionomie follows Loic (Étienne Thibeault) as a visit to a hearing specialist goes awry and he finds himself trapped in an anechoic chamber. As he quickly begins to lose his mind, he struggles to keep a grip on what is real and what is just his mind playing tricks on him. The real stand-out of this 17-minute short film is the sound design. Capturing the isolation of an anechoic chamber with Loic’s degrading hearing, writer/director Maximilien Rolland sets up a setting where everything in your head can make you lose your grip on reality.

There is also a trio of great performances here, with Thibeault leading the helm as the musician who just wanted to see if he had tinnitus. Frightened and melancholic, his performance keeps things grounded against the stern, intelligent audiologist, played by Lise Roy. She’s appropriately frightening even when just doling out medical info to the stubborn Loic. Capping it off is Catherine-Audrey Lachapelle as Loic’s girlfriend –  the emotional component of the film as he faces the truth about his hearing.

Equal parts mystery and horror, Audionomie is a well-executed bit of horror that feels like it’s missing just a bit more to it. There’s an emotional component to it that is pretty much all carried by the actors, as the screenplay doesn’t feel fully fleshed out. It’s not minimalist, but most of the relationship subplot is stripped to its bare essentials. A great sense of chemistry between the two leads, but it doesn’t quite provide anything to the overall narrative.

After getting his teeth knocked out, a man (Adam Drory) walks into a shady-looking 24-hour dental clinic. He doesn’t have insurance and no money to pay for the procedure, but the receptionist tells him it’s not a problem and he signs some forms before being admitted. He waits in the dimly lit waiting area for his number to be called. Once sat down, he finds himself at the mercy of the dentist as he is put under with heavy sedatives and drugs. The price he will pay to get his teeth fixed will not be cheap.

Central Dental is cool for a lot of reasons. For starters, the lighting and set design play a huge component in the film’s eerie atmosphere and even the plot itself. Combined with some solid special effects and one particularly comical and threatening creature, Lindsay Thomas Robinson’s short is a humorous nightmare. Deadpan in its delivery, but not to the detriment of its horror, Central Dental is a great first-time short that evokes some of the weird, schlocky horror films of the 1980s.

The name kind of says it all. Hikaru Tsukuda’s short film, Crap-Man, is shot in academy ratio and evokes Kaiju and superhero films with its presentation. Where it stands out of course is its satirical approach as the titular Crap-Man gains energy from eating, but does not eat from his mouth. No, naturally, he eats from his buttocks and then spews vomit out of his mouth that is probably fecal matter.

It’s a silly concept and it lets you know that right away. A woman walks along the river with a plastic baby doll in her arms (intended to represent a real baby) while playing games on her phone. When she is stopped by a man with a knife, Crap-Man comes to the rescue. Simplistic, ridiculous, and you will know by the title of the movie whether it is for you.

Very much a story that could only exist in the time period it’s set, Darling Pet Monkey is insane. Set in 1969, two boys order a mail-order monkey from the back of a magazine only for it to wreak havoc upon arrival. Tim Tate’s story of monkey mayhem has been covered on NPR and turned into a musical, but Jim McDonough now brings the story to film with a comedic animated short. Using interesting animation techniques and imposing human faces on animated bodies, McDonough’s short is a bizarre creation.

The story itself is absurd, and you get that from listening to the NPR broadcast, but there’s a hectic pace to Darling Pet Monkey that helps escalate the intensity. The only downside to the docushort is that it sometimes feels too ridiculous. The story is enough but adding to it a frantic score, weird animation, and a breakneck pace makes everything far too surreal. At 9 minutes, there’s plenty to get through but I just wish the film found time to comment on itself as opposed to merely present the story in an even more heightened state.

Gon, The Little Fox is originally a Japanese children’s story written by Niimi Nankichi. For those unfamiliar with Nankichi’s work, he is often regarded as the Hans Christian Andersen of Japan for evoking some of the same mature themes in his writing while making them easily accessible to children. Immediately apparent in Takeshi Yashiro’s short film adaptation is just how apt that comparison really is. Utilizing stop-motion animation, the short is one of the most beautifully animated movies with a bittersweet story that leaves a lasting impression.

Gon is a mischievous fox who has taken to stealing from a local village and getting himself into trouble. One day, he takes an eel that was intended for Hyoju’s mother and she subsequently dies without the appropriate medicine. Feeling guilty, Gon takes it upon himself to leave food for Hyoju everyday without him knowing. This is not a happy story, but it does have its moments of cuteness that gives every dramatic moment some extra impact. An impressive short, fans of hand-drawn animation and children’s stories with a moral will find plenty to love in Gon, The Little Fox.

Feeling like a more modern take on Scream’s satire, Smiley Death Face is a novel take on the slasher film using today’s hottest craze: emojis. Rachel (Jordan Ovitt) finds herself alone at home in a group text conversation, when she suddenly receives an emoji from an unknown sender. When it becomes apparent that this person is currently playing games while stalking her, Rachel has no choice but to play along if she wants to survive.

The best part of Smiley Death Face is its commitment to the bit. The killer and Rachel never communicate in any way other than using emojis. Ground rules are immediately set, and the cat-and-mouse game proceeds with the killer holding onto both their anonymity and the upper hand. It’s a neat premise that is well-executed and would feel right at home in a Ready or Not, Happy Death Day, or Scream film. The tone meshes well and shows that both director Andrew Torrez and writer Chris Carter have a firm grasp on both tension and satire. A delightful spin on a tried-and-true setting.

Ben and Jacob Burghart capture some really strong Overlord vibes with their short, Suspense. Opening with up-close shots of a pilot (Jelani Talib) as his plane is about to crash, he soon finds himself trapped in his parachute hanging from a tree in a dark forest. His co-pilot, Dave (Robert Coppage III), is somewhere else in the woods trying to get to him. The pilot becomes frightened when suddenly Dave is attacked by something. It makes weird, chilling noises and is most definitely not human.

As mentioned, Suspense is a short film that is quite clearly indebted to 2018’s Overlord. This short is also set during a war, has monsters in it, and carries a similar tone to it. There’s some decent camaraderie but most of the short’s effectiveness is in the titular suspense. The creature design is solid, but it’s the build up to everything that works strongly. As evidence of the Burghart Brothers being able to command tension, Suspense is a great portfolio piece that will hopefully see them working on bigger projects down the road.