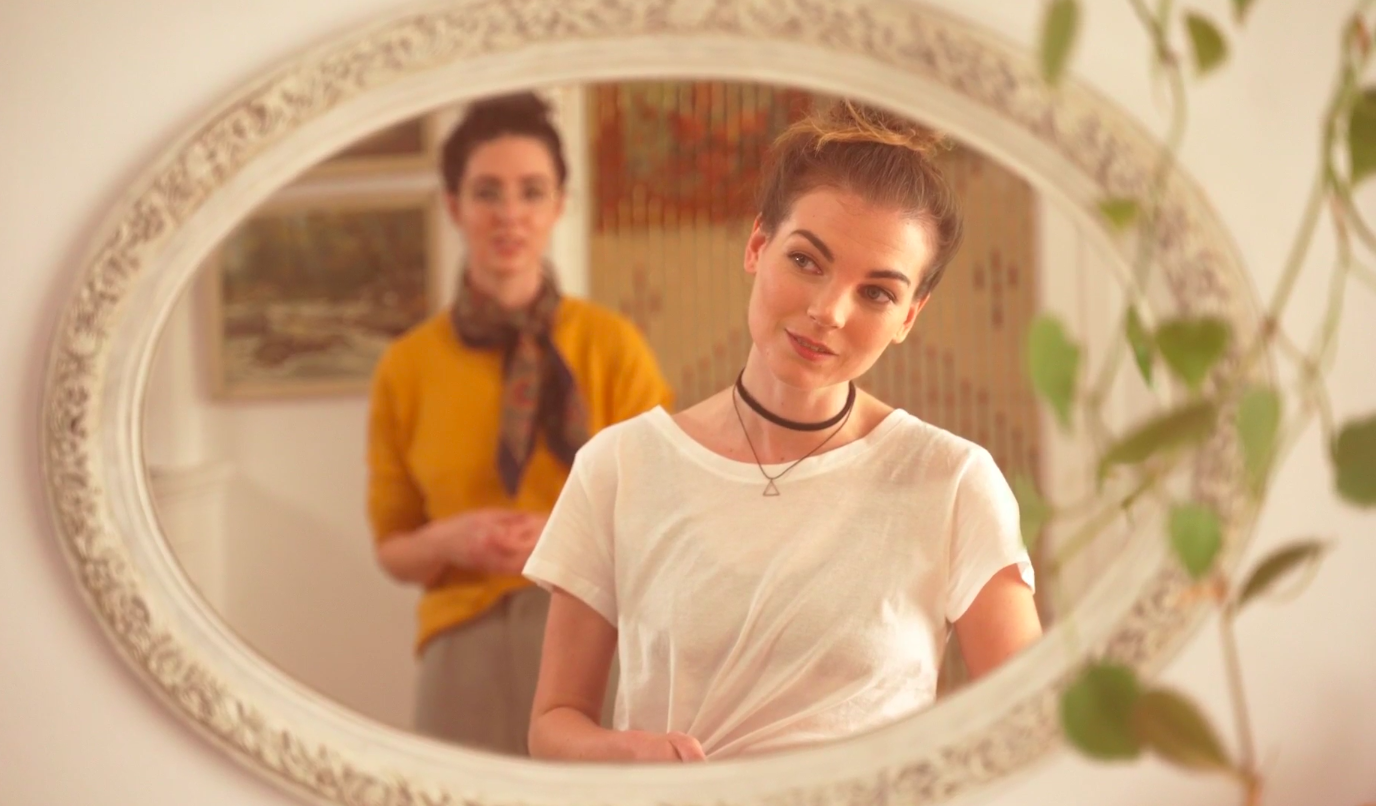 Written and directed by Kaye Adelaide and Mariel Sharp (of True Sweetheart Films), and brought to life by a crew comprised of women and members of the LGBTQIA+ community, Don’t Text Back is a hilarious short film that’s as entertaining as it is thoughtful. The piece follows the story of Kelly (Danielle Lapointe), the victim of a bad Tinder date, as she seeks the help of Jaren (Nancy Webb), an “energy healer and a graphic designer.” While at first, it seems like she’s seeking to rid herself of guy trouble, we soon learn that she’s being strangled by a cursed locket that he’s given her every time she doesn’t answer his texts. It turns out that Will (Py Letellier) is in a magical cult and that it’s going to take Kelly more than positive vibes to break his hold on her.

Don’t Text Back does a great job of establishing Jaren as Kelly’s foil right from the getgo. While Kelly is anxious, meek, and is in a rush to remove the locket, Jaren is calm, unashamedly assertive, and is determined to do things in her own time. Although both women are familiar archetypes, the film does a great job giving them a breath of fresh air. Jaren’s “cool girl” persona is now the all-too-familiar witchy-hipster, who owns too many plants, considers processed sugar to be as dangerous as poison and offers her client the choice of “Autumnal Hollow” or “Whale Sanctuary” as background music in perfect monotone. Kelly’s “nerd” now becomes the anxious, yet pragmatic woman who’s always questioned her sexuality but has let herself become trapped in heteronormativity.

Despite the hilarious fantastical elements of the film, Don’t Text Back is a strangely relatable piece of cinema that begins with the characters and extends to the commentary that’s been expertly woven into the plot. The most obvious idea explored in the film is that of relationships, and the often toxic ones that women can find themselves manipulated into. The movie looks at the modern dating landscape and hones in on how it can be especially toxic for women who are often held hostage to the emotional needs and are forced to perform emotional labour that can disproportionately come with dating men.

With a runtime of just fifteen minutes, Don’t Text Back makes each second count.

The film even goes one step further by not just making this emotional bondage literal, but by highlighting the dangers women can face when they ignore men who are interested in pursuing them. Kelly is being slowly strangled, the chain on her heart-shaped locket growing shorter and tighter every time she ignores the man she’s disinterested in. And while it’s easy to dismiss the violence in this film as fiction, Don’t Text Back challenges audiences on this point too. Although the revelation that Will is part of a men’s rights group is played for laughs, it further highlights the idea that there are entire movements of men who believe a woman’s primary function in a relationship is to support and serve their partner at all costs.

Adelaide and Sharp’s film also takes a fresh look at queerness and sexuality. Although Kelly and her relationship troubles are first presented in a heteronormative light, we soon learn that she’s always been attracted to women and had a queer awakening as a young girl in summer camp. While she swears off dating by mid-movie, come the film’s conclusion it seems that she’s actually just swearing off men in order to be her authentic self. Don’t Text Back also plays up the idea of women supporting and uplifting other women. Jaren, despite her sometimes cold persona, agrees to help Kelly out of her magical predicament in a show of solidarity, admitting that Will and his cult are known to mess with her coven.

With a runtime of just fifteen minutes, Don’t Text Back makes each second count. It packs all the comedy, commentary, and fun you’d expect of a feature-length film into a bite-sized cinematic experience that’s not to be missed. With a witty script, great direction, and an aesthetic that’s to die for, Adelaide and Sharp prove that while you shouldn’t text back, you should definitely catch their work at this year’s Fantasia Film Festival.

The Mortuary Collection is a Disappointing Foray Into Horror Portmanteau