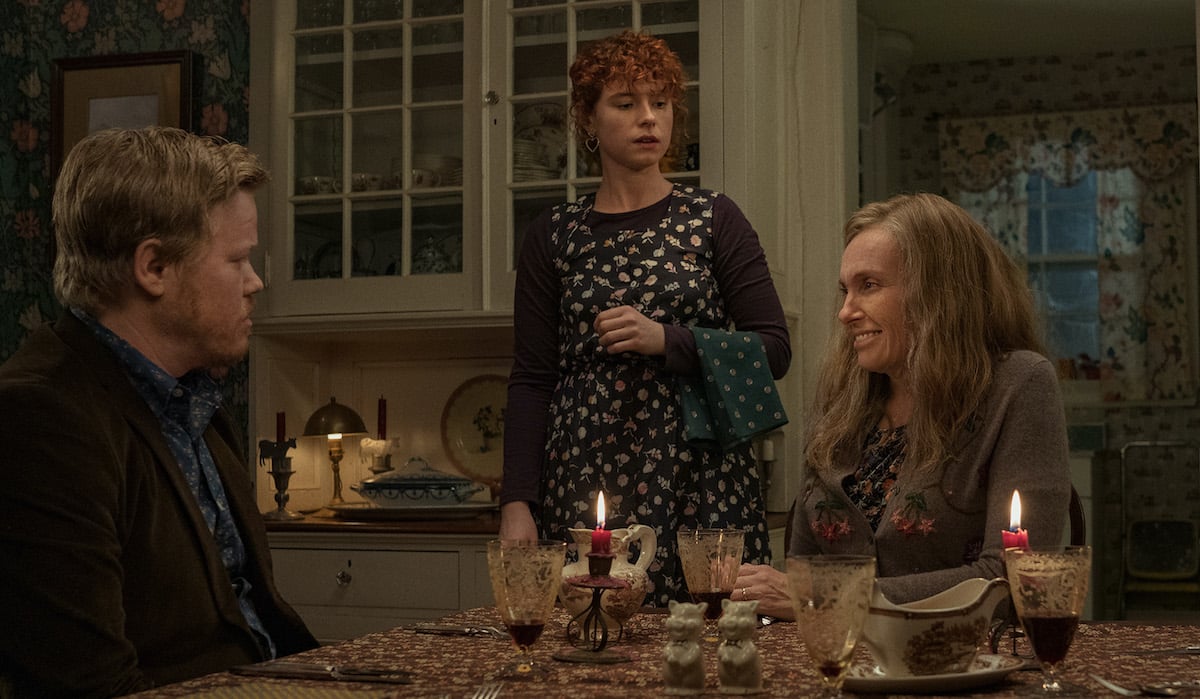 After the release of every Charlie Kaufman film, I feel a bit of anxiety while wondering how long it’ll be before the next one arrives. That’s partly because of the economics of the independent film industry, where Kaufman might find he’s simply unable to secure funding on a new project one day. But it’s also because each film he writes and/or directs feels like a transformation of his style and voice. Someone who saw Eternal Sunshine of the Spotless Mind (2004) likely couldn’t guess how Kaufman would shape his directorial debut, Synecdoche, New York (2008), and anyone who saw that film probably wouldn’t have guessed that something like Anomalisa (2015) would be his next step. It’s the same with Kaufman’s newest, I’m Thinking of Ending Things, based on the acclaimed novel by Iain Reid. It’s undeniably the work of the same auteur, but he’s again trying out new modes and new moods. The film, which turns up the menace that usually lurks below the surface of his works, is darker and more puzzling than any of his films to date, but it’s also his most captivating.

Jessie Buckley stars as an unnamed woman, who waits for her boyfriend to pick her up for a trip to visit his parents in the countryside. In narration, which runs throughout the film, she can’t remember if they’ve been dating for a month, or six weeks, or seven, though she settles on the latter because it sounds longer and more reassuring. Jesse Plemens plays her boyfriend Jake, who drives them far into the countryside in his old sedan as a snowstorm begins to powder the road. Along the way, a thought starts to materialize in the woman’s head: “I’m thinking of ending things.” The relationship is about to take another step toward solidification, but she’s ready to jump ship.

Jake is reserved at times, and at others, he’s happy to list every musical he’s ever enjoyed or recite Wordsworth to his girlfriend. He also has a habit of speaking to her just as she begins her voiceover, as if he’s hearing her thoughts and interrupting each time she tries to collect them. Things turn eerier once they meet his parents, played wonderfully by Toni Collette and David Thewlis, who also starred in Anomalisa. The woman becomes increasingly perturbed by Jake’s relationship with his parents, which constantly shifts in off-putting ways.

It’s difficult to describe the film because of how unmoored Kaufman makes it. Neither Buckley nor Plemons’ characters have much in the way of backstories — intentionally — and their pasts twist and snap just as their future seems to. There’s abundant comedy in their interactions, just as in Kaufman’s previous films, but it constantly feels as if everything could go horribly wrong at any second. The writer and director suggest she might be losing her mind when she recites Pauline Kael’s dismissive review of John Cassavetes’ film A Woman Under the Influence (1974), but eagle-eyed viewers will have noticed a copy of one of Kael’s books in Plemons’ childhood bedroom. Is Buckley losing touch with reality because of her awful relationship, despite having only good things to say about her boyfriend? Or is he the true author of her shifting reality?

I’m Thinking of Ending Things could easily have tipped into all-out horror, but by staying just shy of that territory it manages to be more playful.

Unlike Synecdoche, New York, which left audiences with plenty of clues as to how to interpret it, I’m Thinking of Ending Things is far more oblique. For one thing, there’s that title. When Buckley initially utters it, it sounds as if she’s ready to break up. But as things progress, one wonders if maybe the thing she’s thinking of ending is her own life. I’ve got my own theories about the film, some of which Kaufman seems to corroborate, but it’s hard to make definitive statements about the movie’s subject. This kind of ambiguity is a new development for the writer, and it’s surprising that Netflix would even pick up the film, considering how far it departs from the usual lowbrow trash the streaming service puts its big “N” on. This kind of open-ended story is more commonly found in the theater, and Kaufman takes his experience in that medium and builds on it. There are long sequences spent in the car or in the dining room of Jake’s parents that could work almost as well on stage, except that the director’s knack for tiny, unsettling visual details would be lost.

Buckley is extraordinary as the unnamed woman, thanks to her ability to express her growing unease without resorting to the histrionics that another actor might have opted for. I’m Thinking of Ending Things could easily have tipped into all-out horror, but by staying just shy of that territory it manages to be more playful. Plemens has the more difficult role, as he starts out as a cipher before turning into something more sinister. By the end, he’s reciting a speech from a once-beloved Russell Crowe film that’s utterly bizarre and hilarious. Thewlis and Collette have smaller roles, but they’re both adept at punching up the dark humor. Without those trusty laughs, I’m Thinking of Ending Things would be unbearably dark. As is, there’s just enough light to guide us to the end of these characters’ journey, though we may not recognize the end once we get there.

I’m Thinking of Ending Things will be available to stream on Netflix starting September 4.

Mulan is the Best of the Recent Disney Remakes

A Glance at the Short Films of Fantasia 2020