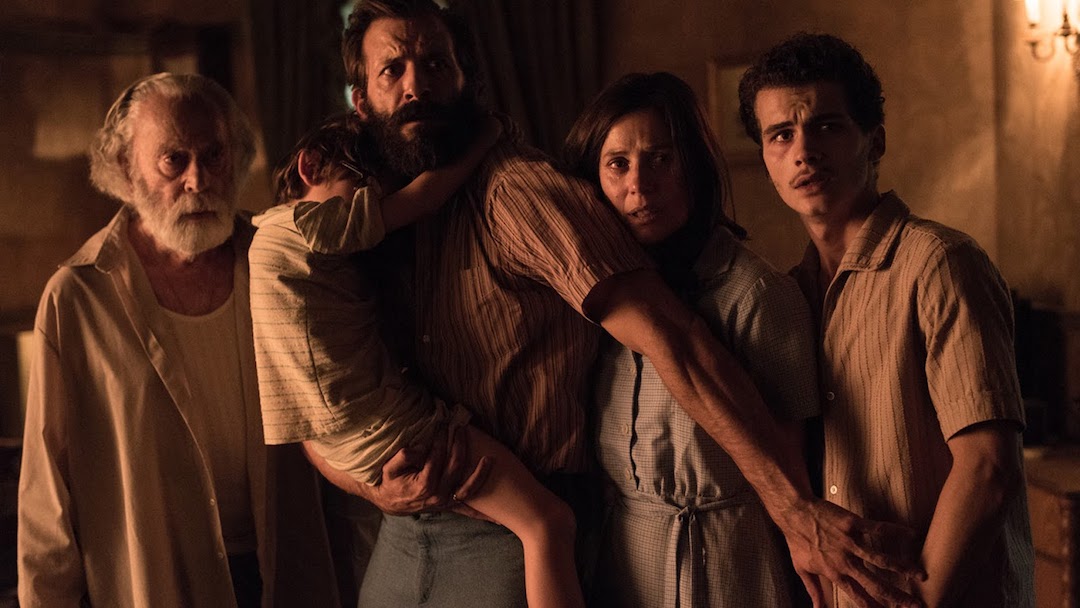 Horror films and the dark are a natural fit, and understandably so; when it’s pitch black, even our otherwise safe homes can take on a sinister aura. Nighttime is when the ghosts and goblins come out in fiction, but it’s also when the killer goes on the prowl for his next victim. Despite the easy scares that come from the dark, Albert Pintó and his multiple screenwriters wisely set many of the spookiest sequences in their haunted house film 32 Malasaña Street during the daytime. It’s a risky move that pays off by making any scene have the potential to go from innocuous to horrifying in the blink of an eye.

After a short scene introducing the eerie apartment building at 32 Malasaña Street in Madrid, Spain, the film opens properly in 1976 with a family arriving to meet their real estate agent before moving in. Begona Vargas stars as Amparo, a 17-year-old girl who has been uprooted from her simple if limited existence in a rural village in order to start a new life the big city. Her family has moved there to find better-paying jobs, but the city also offers a respite from the oppressive fascism of Francisco Franco, who had died the year before. Amparo is joined by her father Manolo (Iván Marcos) and her mother Candela (Bea Segura), along with her teenage brother Pepe (Sergio Castellanos, her younger brother Rafael (Iván Renedo), and her senile grandfather Fermin (Jose Luis de Madariaga). Her parents have put everything they have into the mortgage for the large apartment, which is in a choice part of the city.

Things start to go wrong almost immediately, as doors mysteriously close and lock various family members inside. They begin to notice glimpses of a frightening figure, who is wisely never seen completely, though we do see glimpses of its long, curling nails as they drag on the ground. Many of these eerie moments take place in the afternoon, while the sun is still seeping in the through the windows, but there’s no diminishment of the frights. Part of why it works is that the curtains and the windows are often closed. Even if the sunlight comes in, it’s filtered through a barrier separating the family from the outside world, making their plight seem more hopeless. By finding a way to give the haunting presence power even in the daytime, Pintó makes it impossible for viewers to ever let their guard down. It also helps that he’s able to avoid an overreliance on jump scares. There are plenty of them, but it’s not a given that every scary scene will be soundtracked with a boom designed to make viewers involuntarily jump.

Pintó’s elegant scares are aided by Vargas’ performance as Amparo. Although the spooky entity initially seems to have sinister plans for her little brother Rafael and her grandfather, it shifts its attentions to her for reasons that are revealed late in the film. Fittingly, Vargas is electrifying on screen, and her character is just as interesting when she’s daydreaming about becoming a flight attendant and jetting away from all her problems as she is when she’s trying to evade the evil creature haunting the apartment. Although 32 Malasaña Street initially works as a simple ghost story, as we learn more about the haunting it also becomes a critique of the oppressive policies of Franco’s regime, which was in power from before the start of World War II until democratic governments replaced it in the late 1970s. The film’s political jabs are subtle yet potent, but it never loses sight of its central ghost story.

Nightstream: Black Bear Blurs the Line Between Truth and Fiction With Thrilling Results

Nightstream: Detention Has Little to Offer Beyond Its Video Game Origins