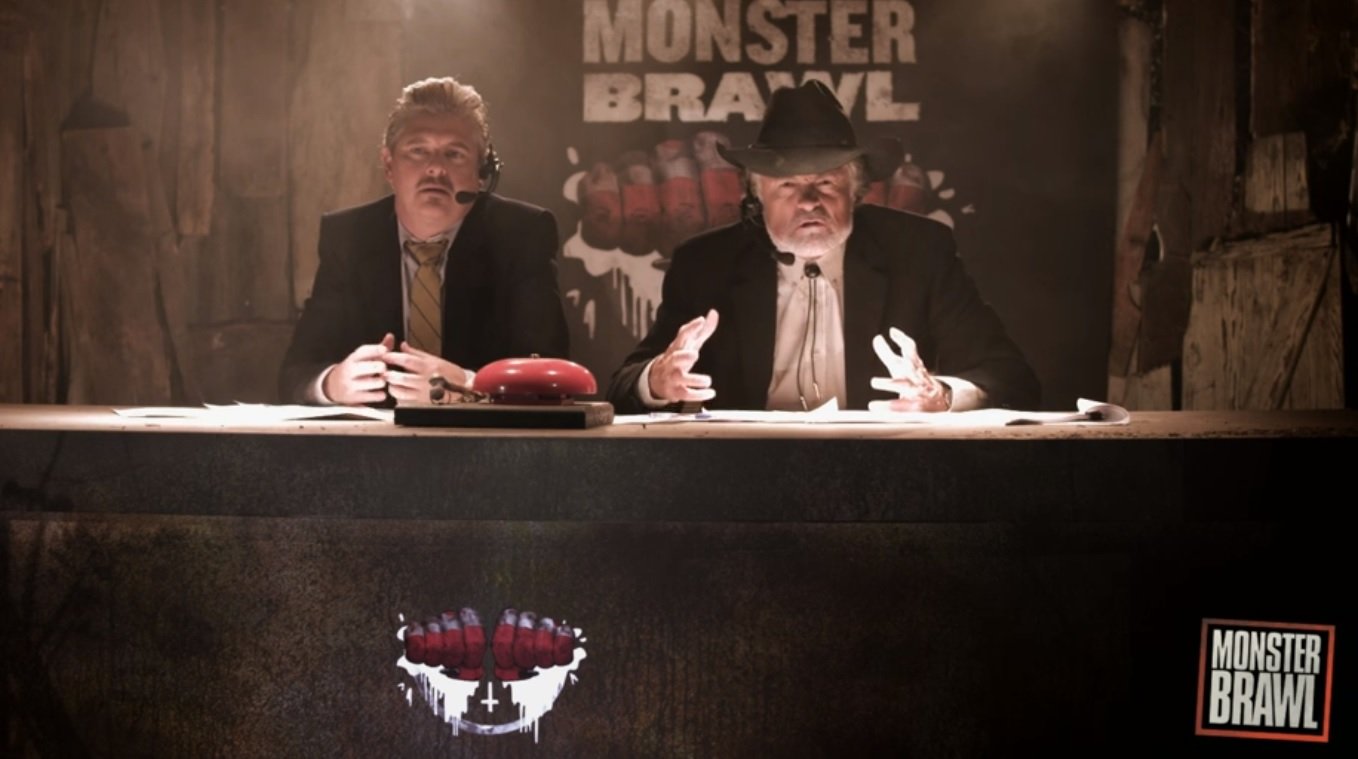 It was only too appropriate that the World Premiere of Monster Brawl at Fantasia back in 2011 was presented by Tony Timpone, former editor of Fangoria Magazine, because if any film could be described as inspired by arguments from Fangoria it’s Monster Brawl. Or even arguments made before Fangoria even existed. The spiritual predecessor to virtually all genre publications was Forry Ackerman’s Famous Monsters of Filmland and one of the eternal arguments that raged in that publication (and its heirs) has always been: Which monster is stronger? Which monster is better? Which monster would win in a fight?

The Excellence in Execution!

The problem with all of these studio films is that there can be no definitive winner because the studios can’t afford for there to be a loser. The franchises and the characters must continue. It’s like in wrestling when champions from different promotions meet in a champion vs. champion match. The only possible result is a draw or some variation on the “Dusty finish” – a wrestling term named after wrestling champion and booker (writer of wrestling endings) Dusty Rhodes when a wrestler earns a victory only to have the victory immediately taken away, usually for technical reasons.

Monster Brawl‘s solution to the eternal argument of which monster would win in a fight is to actually put them in a wrestling ring and have them fight to the death. Specifically, it gives us four creatures: Cyclops, Witch Bitch, Swamp Gut, and the Wolf Man and four undead: Lady Vampire, the Mummy, Zombie Man, and Frankenstein and puts all eight in a wrestling Pay-Per-View designed to crown the greatest monster of all time.

The genius of Monster Brawl is its attention to detail. The event is presented with all of the solemn dignity of a WWE Pay-Per-View… or to be more accurate a WWF Pay-Per-View. Given that three of the monsters have managers, Jesse Cook obviously became a wrestling fan in the early Eighties when wrestling managers like Bobby Heenan and Jimmy Hart were still common.

Cook’s obvious affection for Eighties wrestling is only reinforced by Jimmy Hart’s presence as the ring announcer. Hart is flanked by two Maxim model ring girls, and joined by MMA referee Herb Dean, who bravely tries to officiate the fights, as well as an, announce team consisting of a bitter drunk play-by-play man (Dave Foley channeling Foster Hewitt from the bottom of a whiskey bottle) and a still enthusiastic former heavyweight champion “Sasquatch” Sid Tucker doing colour commentary (Art Hindle rasping his best Jesse “the Body” Ventura impression). Foley and Hindle steal the film but do not in any way detract from the actual monster fights.

While Monster Brawl takes place in an abandoned cemetery (an incredibly effective and spooky set), the film creates variety by presenting well-shot vignettes before each fight introducing the monsters in their natural environments. Again all the details are right, from the make-up to the pre-fight promos – the Wolf Man is the best monster on the stick, but all the promos are great, especially the hilarious promos by the Mummy and Swamp Gut.

The actual monster-fighting features independent wrestlers from Ontario’s indy wrestling scene and New Brunswick’s Acadian Giant Robert Maillet (of 300 and Sherlock Holmes fame) as Frankenstein. (Kevin Nash makes an appearance as Zombie Man’s manager, but doesn’t do much actual wrestling.) The wrestling is basic but well-executed.

The end of each match is marked by Lance Henriksen narrating the finishing move that won the match, followed by Jimmy Hart announcing the winner and one of his ring girls tearing down the banner of the losing monster. Yes, each monster has its own logo and banner – this film gets all the details right, down to one of the ring girls (Rachelle Corbeil) getting increasingly upset that the monsters on her side keep losing, forcing her to tear down their banners.

It may seem to some foolish snobs a modest cinematic ambition to present a fake wrestling pay-per-view featuring monsters fighting to the death, but Monster Brawl executes that ambition perfectly. In wrestling jargon, it earns all five of its snowflakes.

Deadball is a Better Cinematic Achievement than its Predecessor