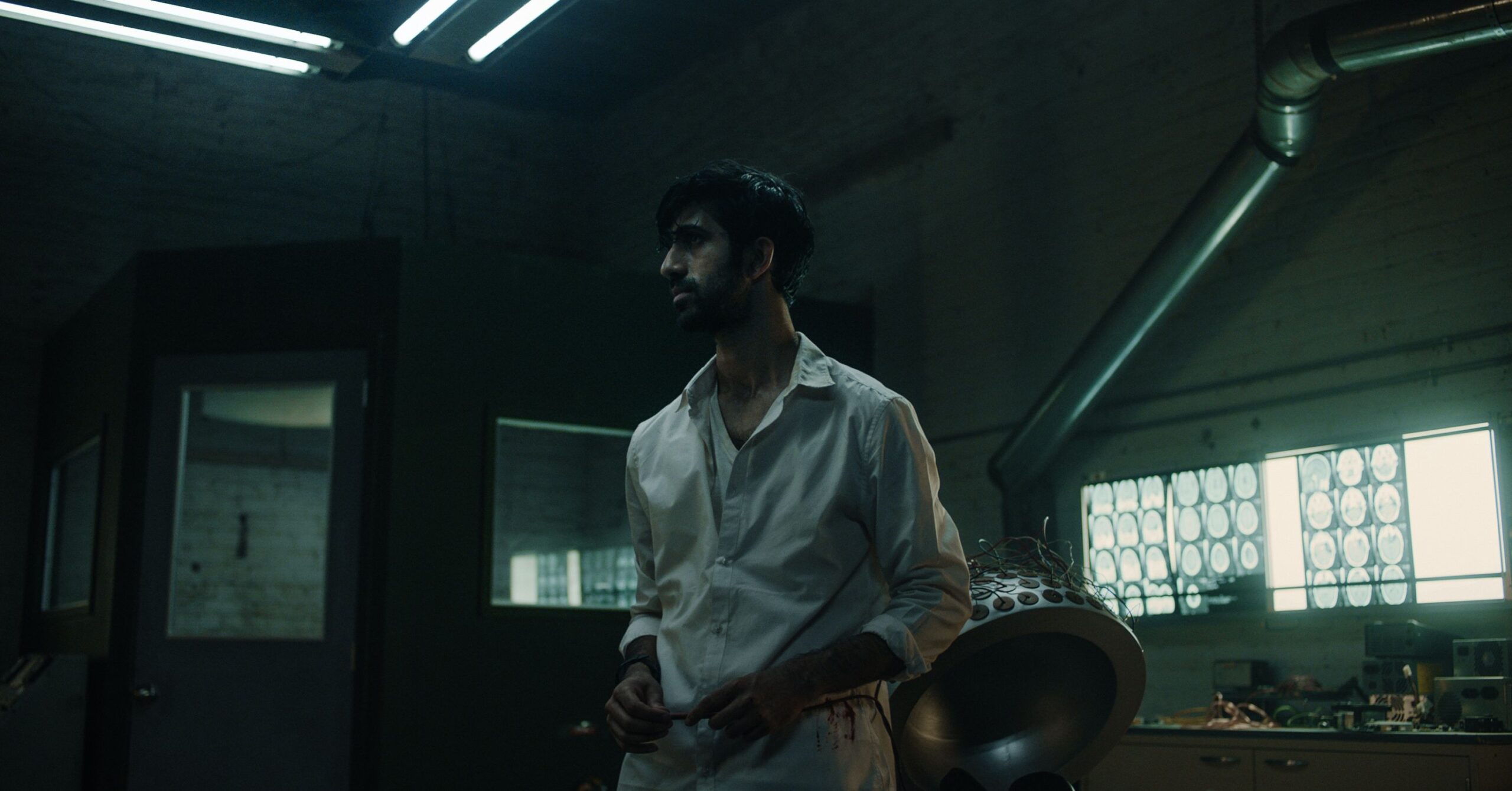 Blackouts are a useful narrative tool for filmmakers who want to get from A to C while removing B entirely. Any gaps in storytelling can just simply be waved away by saying: “He doesn’t remember.” It also helps to remove boring and unnecessary filler. Minor Premise moves this idea one step further, making its blackouts a central component of the story itself. Using its major premise to minor results, this feature-length scientific experiment slash sci-fi thriller ping-pongs across the dark valleys of the mind to investigate the fragmented nature of the brain’s different receptors.

Sathya Sridharan plays Ethan, an alcoholic researcher suffering from the death of his father. Carrying on the pioneering work the old man did into the nature of consciousness, he has a machine at his disposal that can alter different parts of his mind. While delivering a lecture over video-call, one student challenges the ethical nature of such a project, to which Ethan rebounds with a laundry list of reasons why it could be a psychological breakthrough: boosting intelligence, suppressing trauma, increasing happiness, and countless other immeasurable benefits.

But like all good scientific experiments in the movies, there can only be one test patient: himself. Already racked with memory losses, he decides to plug himself into the machine, with the aim of being able to accurately measure and improve his cognitive capability. With the help of a female scientist, excellently played by Paton Ashbrook, he finds himself split into ten distinct personalities — helpfully drawn up on a blackboard — that allow the movie to take a fresh, fragmented approach.

While the premise is begging out for more satisfying execution, allowing clear demarcation between the different sides of his consciousness to see how they would link up, Minor Premise does a lot with its limited settings and budget. With most of the film confined to Ethan’s house, we are forced to gather clues from the videotapes he sends himself during blackouts, as well as pay attention to his various moods. Combined with serious philosophical inquiry into the nature of the human mind, and this is an intelligent and rarified low-budget indie thriller. While non-neuroscientists may be a little confused by all the technology and science-y speak, this is thankfully compensated by a keen understanding of character and plot, as well as fine performances by the two leads.

In fact, this might be the first genre film I’ve seen headed by an Indian-American actor. While Today’s Special does comes to mind, that film was specifically about Indian-American culture; here Ethan’s cultural background only comes through once in a brief phone conversation with his mother.  It’s a small representational note that makes Minor Premise a hopeful sign of future films to come. Sridharan is also easily the best thing about the film, able to anchor its more fanciful elements with real human psychology and feelings of regret and isolation combined with a real desire for scientific progress. I could easily see him headline something even bigger and better.

Steve McQueen’s Red White and Blue is a Bold, Infuriating Look at Racism and Policing

Sound of Metal: An Intimate, Immersive Look at Hearing Loss