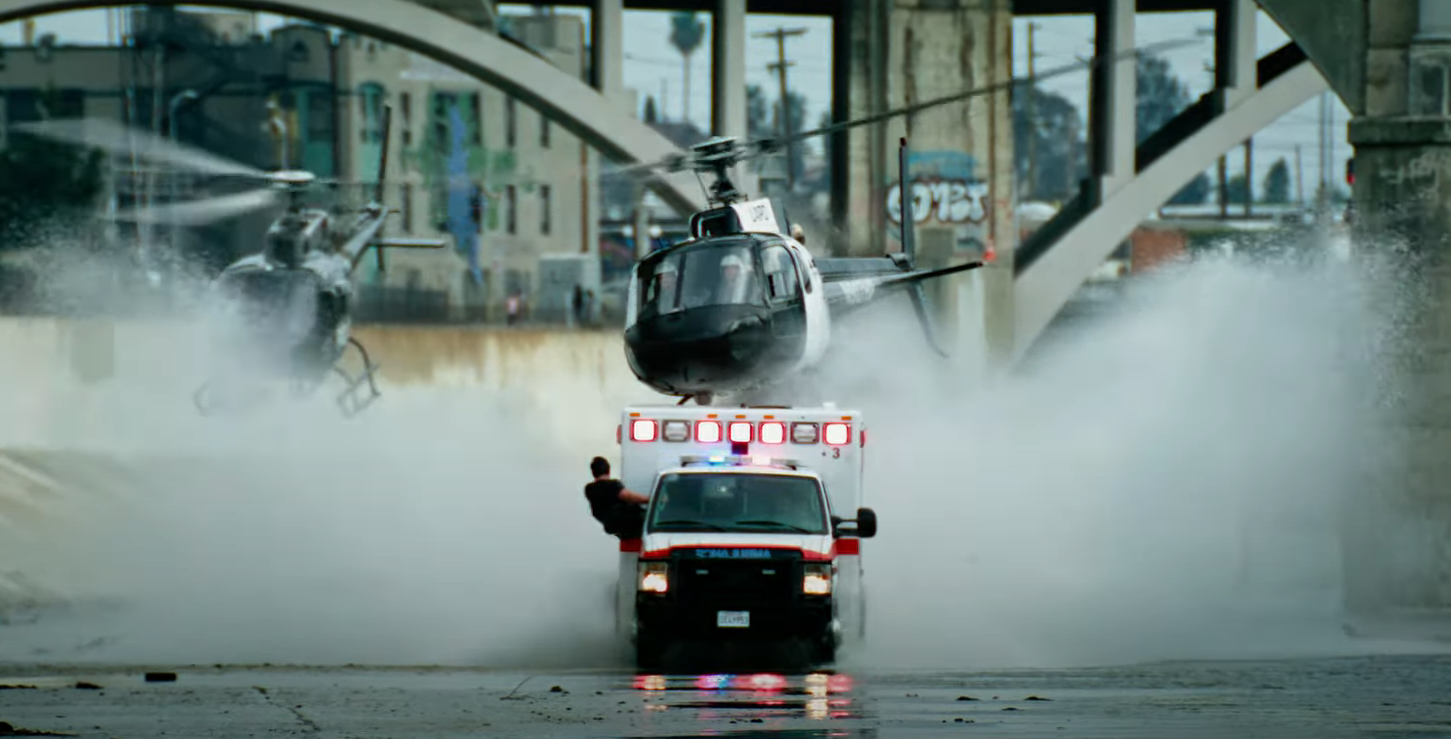 Michael Bay’s latest film, Ambulance, aims to thrill. Almost every minute feels like it’s straining to keep the adrenaline running. However, despite the constant movement of the eponymous ambulance, the film quickly loses all sense of momentum.

We follow Will Sharp (Yahya Abdul-Mateen II) who is struggling to afford the bills for his wife’s operation. He is enlisted by Danny Sharp, his criminal brother (Jake Gyllenhaal), to join the team for one last bank heist as a driver. Predictably, things quickly go wrong, and the brothers are forced to hijack an ambulance containing a paramedic (Eiza González) to flee the scene. The majority of the film picks up from this point, following the trio (along with a wounded police officer), through a mixture of a car chase and a hostage situation.

Perhaps strangely, I found the beginning section of the film much more compelling than the resulting car chase. In particular, the day-to-day actions and routines of the ambulance workers were well-done and poignant at points – it is a shame that this element was shunted aside in favour of high-octane melodrama.

The crux of the film centres on the relationship of the two brothers and the paramedic’s attempts to defuse the situation. It is clear from the very start that Will is obviously framed as the ‘good’ brother (caring for his wife, army veteran) while Danny is the ‘bad’ one (active criminal, acts psychotic). It’s an incredibly simple and obvious binary and uses this fact to manipulate the audience throughout. While Abdul Mateen II and Gyllenhaal are fantastic in many other performances, in this film they come across as very one-note. Will is always reticent and remorseful, while Danny is a villainous caricature, showing a complete disregard for almost all human life. At times the framing of Will becomes almost too forgiving, as the film quickly forgets his crimes throughout the run-time.

The suspension of our disbelief is stretched to breaking: one surprisingly gory scene becomes almost laughable considering its lack of medical knowledge – a fatal flaw in a film with a key paramedic character.

Each trial within the ambulance is predictably resolved and feels derivative of every other hostage/car-chase movie. Much like a man running in front of a speeding car: it gets tired very quickly. In a film that tries to keep you constantly engaged, this is a big problem.

Of course, a word must be said about Michael Bay’s trademark style. Again, here are the quick cuts, the constantly moving camera, the egregious product placement (Cheetos, Heineken Zero Alcohol, and Airpods). Even in moments of conversation, the cameraman seems to have guzzled down a few cans of energy drink, constantly zooming the camera queasily around the speakers. It is a blessing that a lot of the film occurs inside the ambulance: this forces the camera to stay put to fully capture the action in the cramped space. The hyperactive camera and thumping soundtrack, by the end of the film, it irritates, rather than thrills.

It feels at times as if Bay believes that tension can be generated purely through a spinning camera and thundering drums; as if grief could be manufactured by a close-up of an eye and a high-pitched note. If he could, he would want to squeeze the tear straight out of your duct. Ambulance is emotionally manipulative and hyperactive. It provides a few cheap thrills but fails to keep you hooked.

Nitram is a Distressing Portrait of Evil

Zack Hample vs. the World Follows Baseball’s Most Notorious Ballhawk