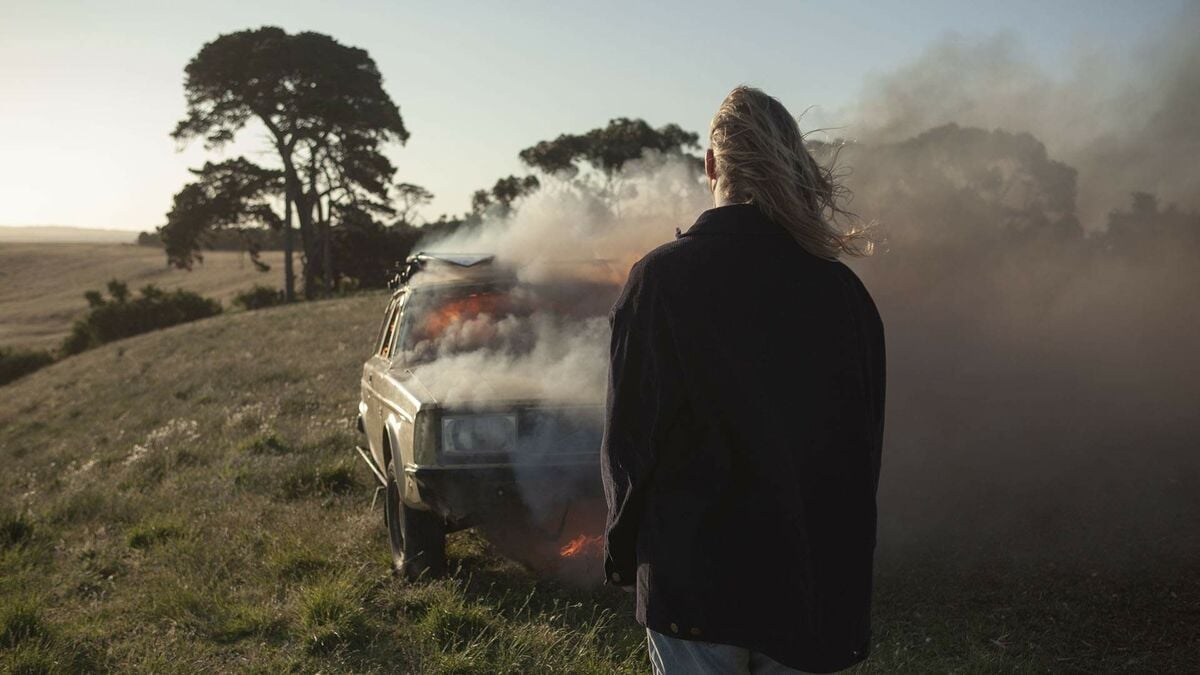 Justin Kurzel continues his look at infamous real-life figures with Nitram – an uncomfortable journey alongside one of the most notorious mass shooters in Australian history. A look at the making of a mass murderer and the environment that bred one, Kurzel’s ability to craft an inhospitable atmosphere that seems to only relent through pain isn’t just suffocating – it’s downright infuriating. Not for the film itself though, as its central performance and that thick level of tension puts the viewer into the mind of an outcast-turned-murderer and serves as a call-to-action to avoid completely avoidable situations.

Right from its opening to its final breath, Nitram is drenched in uncomfortable silence. Every word uttered around its central character – only referred to by the name he does not like being called, Nitram – feels like someone poking a bear. Portrayed by Caleb Landry Jones with a quiet, child-like frustration that bursts into mood swings that range from outward violence to internal disgust, Nitram always feels one step away from exploding.

Going in knowing that his character and the events that transpire are based around Martin Bryant and the Port Arthur Massacre that took the lives of 35 people, it’s difficult not to have that level of anxiousness imposed upon Jones’ performance. He walks a tightrope as an intellectually disabled young man whose parents, played by Judy Davis and Anthony LaPaglia, are there for him physically, but emotionally find themselves wrestling with an inability to properly communicate with Nitram. That they themselves call him by a name he does not wish to be referred to as only cements that disconnect.

It’s in the connection Nitram finds with a former actress, Helen (Essie Davis), that the disconnect Nitram feels with society is amplified. A support system that he finds himself gravitating towards whenever frustrated, Helen ends up being more than just a new friend; she’s the only thing holding the young man together. Davis and Jones end up standing out due to their more eccentric performances, but the entire cast exposes a vulnerability even when guarded and hiding their pain. Everyone is wrestling with something distressing, but it’s whether anyone will listen and help when it’s revealed that ends up the crux of every relationship surrounding Nitram.

For many, Nitram is going to be a difficult watch. It’s in the decision to focus on a character who is on the cusp of committing an atrocity that puts many at a disadvantage with latching onto Nitram as a character. Perhaps the most impressive feat is Kurzel’s ability to create an understanding of how a person can be led down such a dark path while still maintaining focus on the fact that Nitram is less a biopic and more of a reminder that this kind of evil can still happen and that there is a nuanced discussion to be had that might prevent atrocities such as this from happening again.

Martin Bryant’s case is significant in Australia for a lot of reasons, one of which is that it brought about a heavy re-evaluation of the country’s gun control legislation. Nitram isn’t initially about that, but eventually, it becomes a crucial element of the plot. It’s the ease with which someone with dark thoughts can wander into a store, buy a gun, and not run into any obstacles along the way that starts pushing Nitram into a more frustrating experience. Though it is set in the ‘90s, it’s impossible to ignore the modern day issues surrounding gun control in the United States (and as the film points out, Australia’s ongoing concerns regarding their gun legislation).

Kurzel’s latest is easily his most troublesome and the way the film wears its distress so bluntly makes Nitram an uncomfortable experience. There are pockets of lightheartedness but it’s the ease with which those moments can be assaulted that defines the film and highlights the fragility of its protagonist. Caleb Landry Jones gives one of his best performances in an already impressive career and Kurzel finds himself continuing to be one of the most dependable Australian filmmakers – and one capable of tackling controversial subjects with a measure of empathy.

Michael Bay’s Ambulance: A Car-Chase with No Momentum