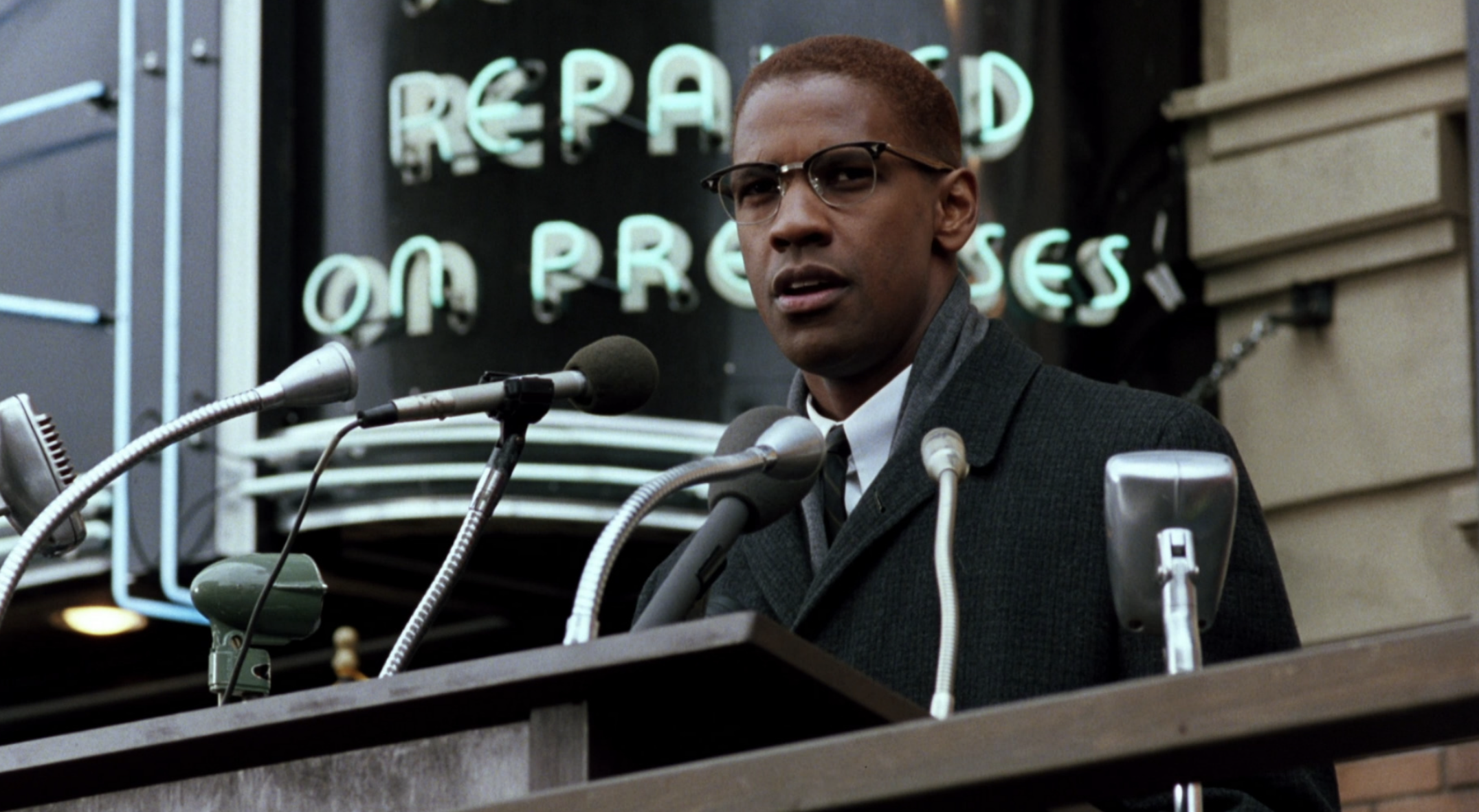 In 1989, Spike Lee made Do the Right Thing, not only one of the most definitive films ever made about American race relations but in my opinion, the Great American Movie.

Three years later, Lee tackled a project that was somehow even more ambitious: A movie adaptation of “The Autobiography of Malcolm X,” one lasting more than three hours. The film was to cover the entire arc of Malcolm’s life, from his childhood to his young life of crime to his time in prison, his conversion to Islam, his rise as a spokesman for the Nation of Islam, his break with them, his pilgrimage to Mecca, and his assassination in 1965.

And it would star Denzel Washington who, in the performance of this career, embodied Malcolm both in his thundering speeches and in quieter moments with his wife Betty Shabazz (Angela Bassett.)

It’s an amazing story, and one absolutely done justice by Lee. Malcolm X arrived in theaters in November of 1992, 30 years ago this week.

The film is given the luxury of taking its time. About an hour has passed before Malcolm even gets involved with the Nation of Islam.

Norman Jewison had been set to direct a Malcolm X movie until Lee successfully demanded that he make the film instead, although Washington had been attached when Jewison still was.

The run-up to the film was frequently controversial, as Lee, amid a financial crunch, got a who’s-who of famous Black Americans like Oprah Winfrey, Michael Jordan, Bill Cosby, and Prince to invest. Later, Lee insisted that Black journalists interview him for the film, and when the film was released, he suggested that Black people skip work and school to see it.

And Malcolm X was the first American film to shoot in Mecca, although those scenes were shot entirely by a second-unit crew. Although the production did go to South Africa to film a cameo by then-newly freed Nelson Mandela.

The film arrived in theaters a couple of weeks after centrist Democrat Bill Clinton was elected to the presidency. And in retrospect, it’s kind of shocking that in 1992, Hollywood would produce a movie so sympathetic to radical Black politics, the sort of thing that didn’t happen again with any regularity until the Black Lives Matter era a quarter-century later, with movies like Get Out and Judas and the Black Messiah.

Shot by Ernest Dickerson, the film looks amazing throughout. The first 45 minutes is, essentially, a 1940s gangster film, with the lighting, music, and clothes to match, before the palette changes dramatically, for the prison, Nation of Islam, and Mecca portions.

Malcolm X wasn’t a significant box office performer at the time, but critics loved it, and it’s gained more respect over time. Somewhat ridiculously, it was nominated only for two Oscars, for Denzel Washington and costume designer Ruth E. Carter, and neither won.

Of the five films nominated for Best Picture that year — winner Unforgiven, plus The Crying Game, A Few Good Men, Howards End, and Scent of a Woman — only Unforgiven is even in the conversation, reputation-wise, with Malcolm X. Washington certainly deserved the Best Actor Oscar over winner Al Pacino.

Bad Axe is the Best Documentary About 2020 Yet