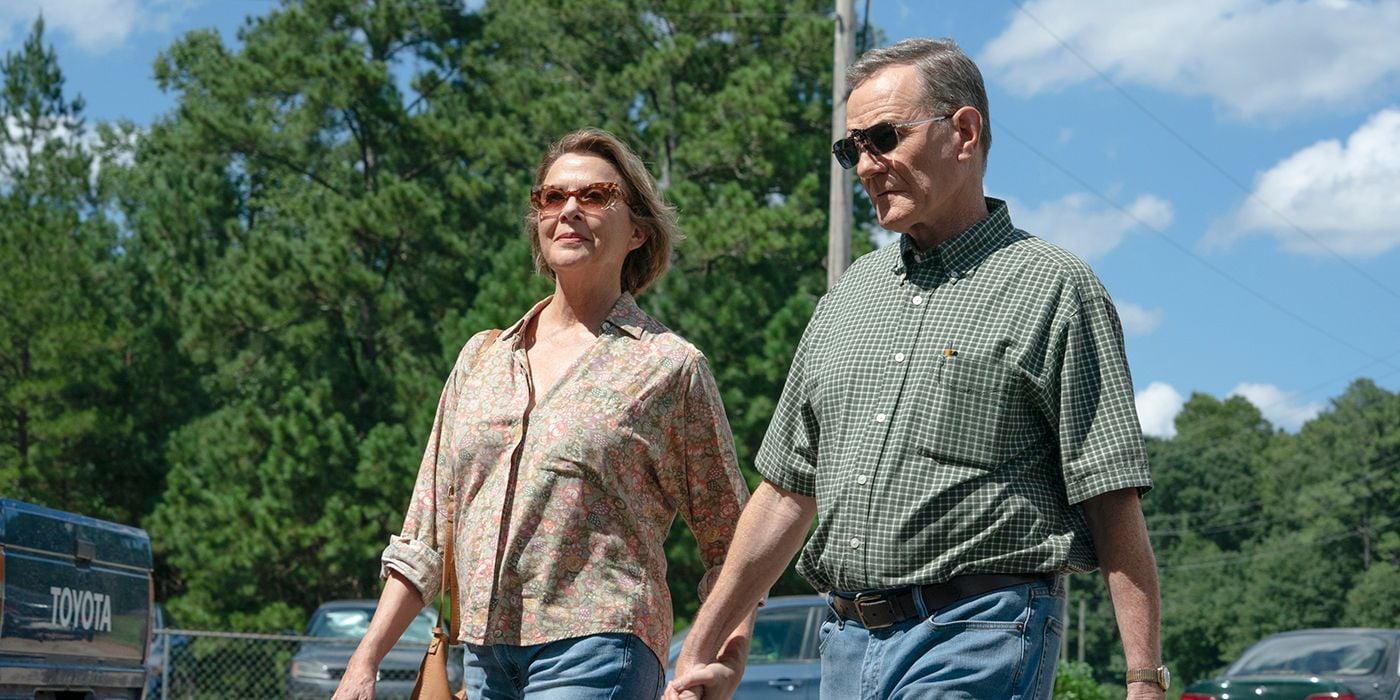 While watching Jerry & Marge Go Large (a film based on the true story of math-related lottery magic used to power a small town’s revival) it’s difficult not to think about how our society fails both its elderly and its youth. The film’s titular couple successfully exploits loopholes while the filmmakers expose the limits of our corporate system.

Jerry (Bryan Cranston) is a product of capitalism —He doesn’t know who he is or what he likes outside of his job, and only owns clothes suitable for the office— but he is also the solution to it: Newly retired, he’s figured out a way to harness his free time that will provide supplementary income to his local community, a group of lovely people struggling financially in all the ways many middle-class communities all over the world are familiar with. And he does it all without committing any crimes; Legal, moral, or otherwise!

He’s supposed to read as an awkward and seemingly impersonable genius, but Cranston’s Jerry is more convincing as a beloved grandfather who pulls at your heartstrings with every display of his sincerity. His wife, Marge (Annette Bening), is vivacious and enthusiastic; simply and proudly enamored with him. She had been looking forward to spending time together now that Jerry’s retired, but upon learning of his lottery plan, she’s undeterred: “We need something for us,” Marge tells him. “I didn’t think it would be playing the lottery, but I’d rob a bank if it gave us something to talk about.” Then, when they discover the specific lottery game is phased-out in their state, they turn it into a road trip adventure.

This blissful, just-happy-to-be-together feeling between Marge and Jerry is infectious; The sweetness between the many characters we meet in their community is almost overwhelmingly sitcom-level wholesome, but it’s still secondary to the joy of seeing the couple embody decades of unwavering love on screen. Jerry and Marge could not be a more by-the-book definition of “regular” couple, but their love feels one-of-a-kind; They’re living a fairy-tale romance while spending days at a time in a gas station counting lottery tickets, even more in love now than they were 46 years ago.

Marge is effervescent, and she is Jerry’s inspiration to make his success into something meaningful. So, when his theory proves itself, they decide to bring the whole town in on their winnings. (Even accepting alternative forms of payment from neighbors who are behind on bills and can’t afford to pay cash.) The specific math of gaming the system isn’t entirely clear to the audience, but when montages of their hotel room filling up with buckets of lottery tickets are set to classic The Who tune ‘Baba O’Reily’, it doesn’t need to be.

The Jerry & Marge Go Large cast is remarkable: With Cranston and Bening leading, and an almost impossible amount of familiar faces (Pitch Perfect’s Anna Camp, Limitless’ Jake McDorman, and Station 19’s Tracie Thoms among them), every member of the community, and even the out-of-state area where they travel to play, is instantly memorable: The patient bank teller who took Marketing classes; Jerry’s granddaughter, who draws the most adorable investments company logo of all time; we become involved in the love-life of gas station owner Bill (Rainn Wilson); even Jerry’s “part-time accountant, full-time online travel agent” friend (representing late-stage capitalism at its finest).

We recognize Jerry’s wisdom and expertise in the considered way he handles the investment company he sets up to manage the town’s funds; We see him heartbroken realizing and remembering when his affinity for math took him away from precious moments with his family. In the present, Jerry is determined to spend time with his wife and his children; his sincerity consistently eliciting emotional responses.

But it’s not all smooth sailing, of course. Uly Schlesinger —who gave a striking, nuanced performance as ‘privileged kid with a heart of gold and a massive crush’ in HBO Max comedy Generation— is a one-dimensional asshole in Jerry & Marge Go Large. As Harvard student Tyler, whose only personality traits and motivating factors seem to be ‘rich and motivated by hate for his dad’, he and a friend discover the same lottery loophole Jerry did. But their tactics are polar opposites. Tyler is arrogant, rude, and dismissive to everyone around him —including the army of students doing all the lottery ticket work on his behalf, and the sensible older couple from the second he sets his eyes on them.

What makes Jerry & Marge’s community so easy to root for is exactly what makes them an easy target for the Harvard kids. Tyler threatens Jerry with stealing his family’s identities and hacking their bank accounts as effortlessly as they hacked the state lottery to find the gas station’s location. When Tyler tries to out-Harvard Jerry in mathematical-theory, he’s squished by the older couple like the immature bug he is. And every time Jerry triumphs over him (there’s actually an incredible number of sick burns delivered against Tyler) it’s feels necessary to consider the fact that this baby-faced menace is the poster child a certain sector of the finance and tech industries are building up as the future, while skilled legions are banished to oblivion as soon as they reach a certain age, disregarded for the rest of their lives unless they do something magnificent. (In Jerry’s case, even then.)

Perhaps it’s intentional, in an effort to reduce newer technology’s role against the “sheer power of pure math” narrative, but the Harvard students’ position as the enemy is half-baked and watered down. Ironically, it feels as if the film does not invest enough in them to make an impact. There’s no regularity or rhythm to balance the townspeople we love against the strangers who may or may not be standing in the way of their continued success. Even when threats are eliminated, any dissatisfaction in the way their storylines only kind-of wrap up is noticed as an afterthought.

Jerry & Marge Go Large is about more than a man who used his talent to make his town rich. It’s a story about a man who was set apart from the people he loved for his whole life because he couldn’t un-see the math in things; Now, he finally gets to use math to connect with them. Jerry shows us the heart on his sleeve without compromising his reserved presence on screen –and each moment of vulnerability revealed in Cranston’s performance welled up more tears in my eyes.

The middle-aged are so often overlooked; our retirees disregarded. But Jerry dared to see the world from his brilliant perspective, and when it brought him luck, he brought everyone he cared about along with him. When a reporter visits Jerry, she comments that the extensive time he’s spending to count lotto tickets with his wife is “so much work,” Jerry tells her that it doesn’t feel like work: “I’ve worked all my life. This is different. This is very different.”

Jerry & Marge Go Large shows us the flaws of capitalism, the joy of small towns, and the beauty of good people demonstrating genuine kindness to each other.

Minority Report at 20: When a Vision Becomes Reality