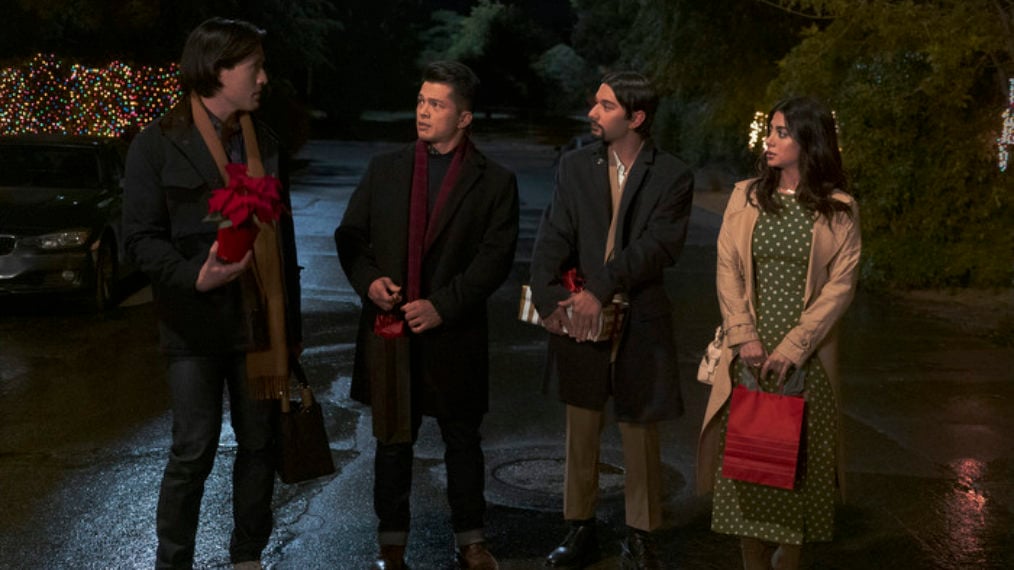 Created by Gloria Calderón Kellett (co-creator of One Day at a Time), With Love’s five episodes depict a year of Mexican and American holidays seen through the romantic lives of the dramatic, loving Diaz family. We meet them first on Noche Buena (Christmas Eve), and the following episodes reunite us with the family and their shenanigans on New Year’s Eve, then Valentine’s Day, the Fourth of July, and for Día De Los Muertos.

There’s so much joy written into this show, and a major part of that comes from its meaningful representation —of the queer community, the AAPI community, and Latinx culture; most noteworthy is that Kellett created space in the cast for more than just one character of a certain demographic.

Because of this (sadly) remarkable diversity, With Love is a gift in its very existence, but it’s also a gift to watch over the holidays —perfectly encapsulating the experience of a big, welcoming Latinx family, complete with the food, gossip, traditions, matchmaking attempts and secret-keeping. It’s evident right from the start: This is what Christmas (and life) looks like when who you are is just that. Any coming-out narratives or identity struggles are in the past; In With Love, who you are is welcomed, adored, and celebrated along with the holidays.

Emeraude Toubia (just as enthralling here as she was in Shadowhunters) stars as Lily Diaz, a newly single Mexican American woman looking for a love that feels perfect and magical. Her brother, Jorge Diaz Jr. is played by Mark Indelicato (best known for his role as the fashion-obsessed nephew in Ugly Betty). He lives life “out loud, in like 4K HDR” and craves grand romantic gestures from his boyfriend, Henry. Filipino American actor Vincent Rodriguez III (Crazy Ex-Girlfriend) plays Henry, who almost immediately loves the Diaz family as his own.

Desmond Chiam (The Falcon and the Winter Soldier), an actor of Chinese Singaporean descent, plays Nick Zhao: generous lover, total himbo, and Jorge Jr.’s delightfully loyal best friend. (Actors’ ethnicities are mentioned here because a cast this diverse and truly representative of the characters they play is rare, extraordinary, and absolutely a reason to watch!)

Afro Cuban actor Rome Flynn stars as Santiago Zayas, an endearing Cuban American potential love interest for Lily. He’s a book-loving wine connoisseur who identifies as “the guy who is best friends with his dad.” The two men deal with the death of Santiago’s mother in the first episode. Flynn’s charming comedic delivery, of which there are several striking gems, shines bright upon hearing from a woman working in events (who ostensibly enjoys her job) that she has to attend big parties all the time: Santiago responds with a “Shit. I’m sorry. That sucks.” so surprisingly, sincerely macabre that it demands a replay.

Sol Perez, the Diaz siblings’ non-binary cousin is played by Isis King, who is trans herself. Sol is a brilliant, thoughtful romantic lead who uses they/them pronouns, and there is no complexity or discomfort around this with their family or new friends. It’s particularly touching when we see their grandparents using their pronouns easily and comfortably. They work as an oncology resident at a hospital and start dating a doctor who we later discover is an incredibly supportive dad to a “genderqueer, or at least gender expansive” teenager (played by non-binary actor Birdie Silverstein).

When Sol meets their boyfriend’s child for the first time, tension between the two characters makes the important point —albeit with the dismissive attitude only a teenager can carry—that, contrary to heteronormative stereotypes, just because two characters are queer or don’t comply with the gender binary does not automatically make their personalities compatible. Ultimately, they find a sweet common ground, but the conversations surrounding their initial difficulties make a lasting impact.

The With Love writers also made the powerful decision to establish the two most reliable, long-lasting, actively romantic relationships in the show as the types we don’t often see on screen, and certainly not in such a positive, prominent light: The grandparents’ marriage, and the two men dating. These two couples collide hilariously in the first episode when Jorge Jr.’s abuela (Renée Victor) is told that Henry is bisexual, and she calls the entire family over for a (wholesome, amusing, and informative) Q&A session with him. “I get it,” Jorge Jr.’s abuelo (Pepe Serna) jumps up to announce: “I love fish tacos, but I like chorizo con huevos, too. I’m like a food bisexual!”

The chemistry between the With Love cast is warm as its cinematography: always glowing, genuinely inviting; It truly feels familial. Everything from the ‘having a Coke with you’ adorability of Lily’s relationship with her brother’s best friend, Nick, to the simple intimacy of Lily inviting Sol to change their clothing in the bathroom while she’s using the toilet, feels as though they’ve been together like this for years.

The show covers various familiar relationship tropes: Friends-to-lovers, secret hook-ups, serendipitous meetings, and captivating will-they-won’t-theys; using its characters’ emotional turmoil through these situations to ask big questions: What is love? How do you stay in love? Is marriage actually meaningful, and worth it? How can a person be both queer and Catholic?

With Love’s intricate and entertaining storylines allow the characters to demonstrate the impact of a pseudo-affair on a relationship, and the significance of checking in with your partner about their visions for the future. Through its gorgeous costumes, cheeky cast, and golden lighting, the show asks smaller, equally relevant questions, too: Who gets custody of your friends after a breakup? Which person’s couch do you keep when a couple first moves in together?

The older family members throughout the show are specifically depicted as thriving financially, notably free of the stereotypical burdens Latinx characters often carry on TV. Tia Gladys, played by the show’s creator, is confident and single in her forties, living boldly and happily without a partner. She’s a joy to be around, written to honour the many women who live with the same passionate fire, and no disappointment in their singledom.

Lily and Jorge Jr.’s parents are in their fifties, stuck in a routine of running their successful restaurant and helping their children grow up. They rekindle the flame of their marriage by engaging in therapist-mandated sex activities and trying edibles. The family’s fiery grandparents show us what love looks like at seventy; They are also the first couple With Love mentions having sex —and shower sex, no less!

With Love’s Latinx identity is vibrant as the cultures and communities it represents. The frequent Spanish-language conversation remains gloriously un-translated; the “chisme” is endless; characters are constantly surrounded by family and delicious food. Henry’s comment that “it feels like I’m dating your family as well” will feel familiar to many people of colour.

The show depicts and references many Latinx holiday traditions: Celebrating Nochebuena together, feverishly eating grapes at midnight on New Year’s Eve, the maleta walk to bring travel into your future; the process of building Día de los Muertos altars. Its soundtrack incorporates a timeless collection of modern Christmas music and older Spanish songs, a score composed by Siddhartha Khosla (who did the score for Only Murders in the Building), and even includes a song written specifically for the show by Lin-Manuel Miranda and performed by Gloria Estefan’s daughter!

This series is perfect for audiences who love holiday-specific movies like New Years Eve and The Holiday —some of With Love’s storylines even have the charming, interconnected character qualities of Love Actually and Valentine’s Day, but it’s richer for not being an all-white heterosexual cast typical of those cult favourites. Though Latinx viewers will adore the authentic festivity of With Love, its magic radiates unmistakable ‘annual holiday watching’ energy for audiences of all backgrounds. Kellett’s latest offering is funny, heartwarming, and a fresh take on what love –in romance and families– can and should look like for all of us.

Hawkeye’s Finale Brings The Holiday Cheer With an Imperfect Bow

Hawkeye’s Problem with the Marvel Universe