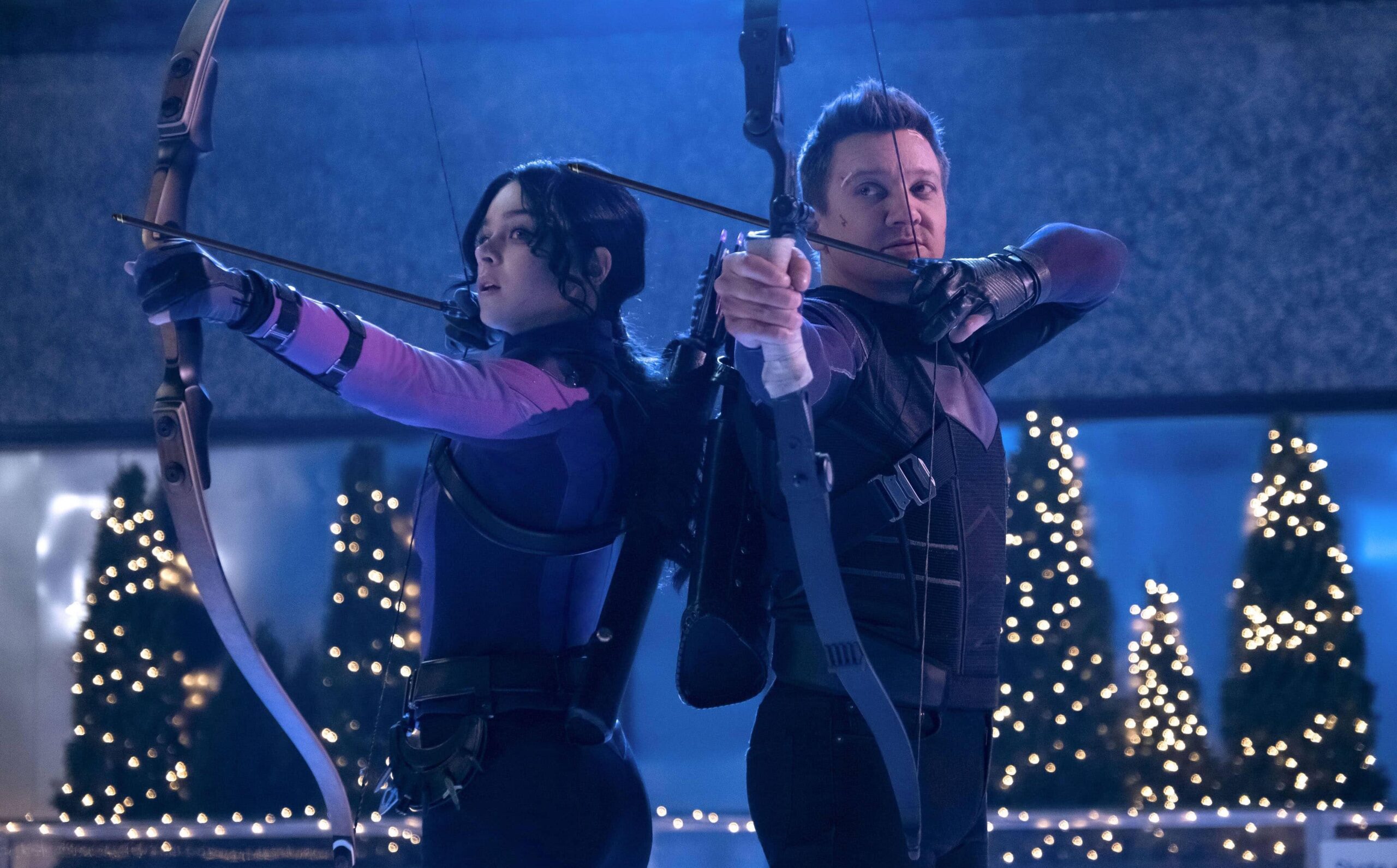 Hawkeye Episode 6 “So This is Christmas?” Finale Review

Christmas is finally here, and the Kingpin’s forces are ready to meet their match. Hawkeye has been on a roll providing quality Marvel entertainment since its debut on Disney+, but many of its ideas and scenarios have been banking on a stellar payoff. Fans will be cheering to agree that the series finale is worthwhile, but the show’s overarching themes are a bit hampered in its closing moments. Overall, Hawkeye wraps up rather neatly with an enjoyable Christmas week episode that outclasses Marvel Studios’ previous grounded-esque series on the platform. “So This is Christmas?” is an imperfect closing for Hawkeye that succeeds in completing its narrative with the cost of never completely satisfying viewers.

Editor’s Note: Spoilers ahead! It’s the final week of Hawkeye (at least perhaps for now) so we are going all-in on analyzing the details!

Right before Christmas Day, Clint Barton and Kate Bishop take a stand against Eleanor Bishop, the Tracksuit Mafia, Wilson “Kingpin” Fisk, and Yelena Belova in one action-packed finale. From Jack to Kazi, everyone has gathered in Rockefeller Center’s main tower for Hawkeye’s big conclusion that aims to wrap up all of its plotlines with one loose and bright bow. “So This is Christmas?” is a good note to end Hawkeye off on, but it does leave a lot more to be desired from the series as the archer duo leaves quite a few questions unanswered. On top of grounding everyone to one key location, the usual benefactors of the show are on full display as it hits some of Marvel’s typical recurring finale hurdles.

“So This is Christmas?” is not the deepest or most emotional episode Hawkeye has had to offer — if anything, the finale’s core goal is just bridging the gap between Kate and Clint’s relationship as superhero partners. As expected by now with how the series has set up its characters, Clint, Kate, Maya, and Yelena all steal the episode’s best moments even if they do not all get to encounter each other or their enemies. Clint and Kate buddy up for a sharpshooting sendoff while Maya and Yelena step away from their past as they find closure.

For those here for the Hawkeye mantle, heroic beginnings, and popcorn entertainment, you will not walk away unsatisfied by what “So This is Christmas?” has to offer. For those looking with a more critical eye, however, even with all of its breakthrough moments of emotion and practical action Hawkeye still falls for some of Marvel’s compromising beats. Like its holiday composed music score and relatable characters, the action and humor of the finale are as loveable as they have been at their peak. There are particular plot points and themes that have somehow gone ignored. The main heroes of the cast are absolutely shining like New York’s iconic Christmas tree, but the villains disappointingly are placed in flimsy positions like the city’s populated albeit uncared-for rugged streets.

The two aspects of Hawkeye’s overarching narrative that the finale somehow never properly tackles are the theme of accountability it initially proposed and the reality behind Kate Bishop’s father. Both of these subjects spearheading the premiere episodes are rather poorly ventured into, but at the very least one can be fixed in the future.

The Ronin crisis does see its end, yet it’s baffling how after all this time Clint and the others never take accountability for what has happened — which is ironic to say considering how well Marvel has portrayed accountability in their last few blockbusters (Captain America: Civil War, Avengers: Endgame, and Spider-Man: No Way Home, just to name a few). Accountability has always been a theme of Hawkeye, yet the finale never dips into it at its greatest potential. It’s excusable for the killers of Maya’s father to avoid the truth as they are villains, but it seems a little odd that the hero never properly confronts the problem that has haunted him for years. The burning of the Ronin suit and Clint’s new blue attire is symbolic of his progression, yet there could have been perhaps a few more scenes just to nail the point of how accepting he has become.

What Clint needed most was to come to terms with himself about his mistakes as Ronin. On the other hand, Kate needed to confront Eleanor about was her father’s death. While the show’s main objectives are taken care of, “So This is Christmas?” never explains how Kate’s father exactly got involved with the mob or why he was allegedly killed. Considering this is the franchise where no dead body means the character likely lived, Kate’s father naturally seems like a future plot point the show could build off if there is going to be a second season — it is just quite odd how the first two episodes made a big deal out of him and meanwhile his mentions resulted in more or less nothing.

As for Kingpin, Vincent D’Onofrio gives another knockout performance, even if his appearance is short. The criminal empire leader’s inclusion is welcoming, yet in the same vein as Marvel’s recent problems introducing villains too late into their shows, the audience can not help but feel as if the antagonist could have been far more involved. It is a shame that Kingpin really only got to be in one episode of Hawkeye because he is supposed to be the driving force behind all the chaos going on throughout the show. For a character who is supposed to be the source of every new players’ struggles and trauma, it is hard not to acknowledge the fact that Kingpin has little to no screentime. There is no doubt that D’Onofrio will return soon to the Marvel Cinematic Universe along with his original Daredevil co-star Charlie Cox, yet until we get to see his next big appearance it will be disappointing to remember how the studio carelessly slapped together his return.

However, if there is one great thing that did come out of Kingpin’s time in Hawkeye it is how he was able to help kickstart Maya Lopez’s journey. Marvel fans had several questions as to what Echo’s upcoming standalone series could entail, but Hawkeye has given her a ton of interesting scenarios to bounce off. Every Marvel Studios series on Disney+ has been setting up another project, yet Hawkeye’s feels the most organic. Echo was a legitimate character who was given a lot of love. The deaf heroine was someone the showrunners wanted to see audiences fall for, and they did a great job doing so. Kazi’s death should have been saved for her upcoming show on the streaming platform, nonetheless, Echo has a promising future ahead. It will be interesting to see if Echo decides to continue chasing ghosts who haunt her past — because let’s face it, Kingpin is far from done with New York.

Despite the shortcomings “So This is Christmas” displays, if this is the end for Hawkeye then the limited series has concluded with a great run. However, Clint Barton and Kate Bishop still have a long road of superhero adventuring to fulfill ahead — there is no doubt that these two deserve more episodes. Hopefully, Marvel Studios will give into audience demands soon enough. Even with the promise of more Echo, Kingpin, and Yelena in the future, on its own Hawkeye overall hit the mark when it comes to exploring the lone Avenger’s reality post-Endgame.

With Love: A Festive Year of Family Holidays and Latinx Romance