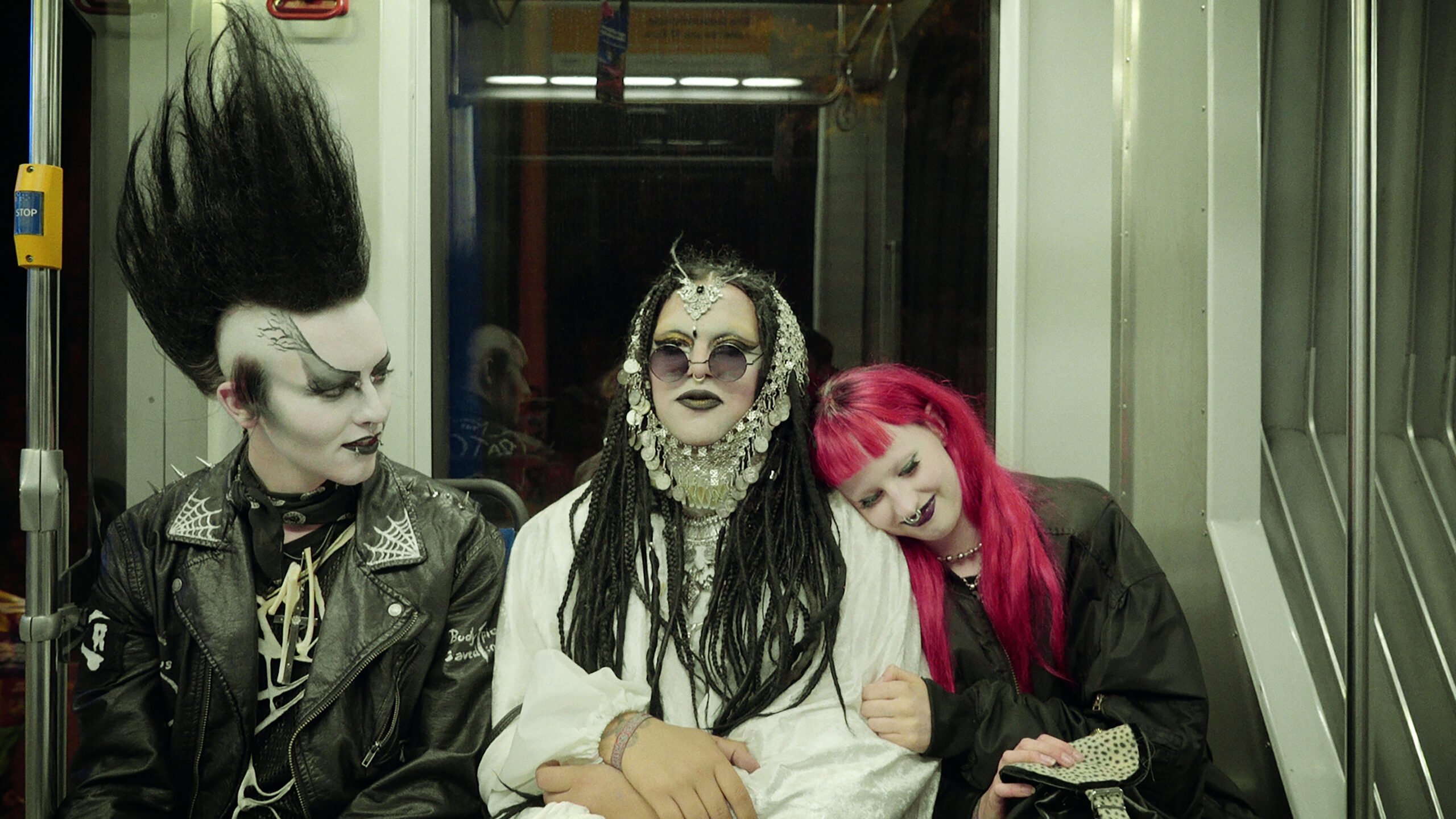 Image Courtesy of Made in Copenhagen

The increasing importance of community and finding like-minded people to socialize with is placed at the forefront of the goth-centered Dark Blossom. Frigge Fri’s documentary focuses on three friends in Denmark connected by their passion for the macabre and a universal disconnect from the expectations of society. As they express their inner selves through Goth subculture, Dark Blossom highlights the catharsis that can be found when able to be yourself within a community, while also positing the importance of technology in finding a place to feel safe.

Individualism does not necessarily mean isolation, and that’s largely the point made in Dark Blossom. The documentary centers itself around Josephine and her two friends, Nightmare and Jay. Each one finds their way to becoming a goth prior to when the documentary starts, but what’s immediately apparent is how each person has their own creative endeavors and personal interests that the other two friends enable and cultivate. Josephine makes art out of the bones of dead animals she finds, Nightmare finds solace in performance and music, while Jay draws and writes horror, much to the dismay of his very Christian family. However, Josephine also finds joy in posting videos on social media, which ultimately leads to the tension of the documentary as the group’s friendship is tested when Josephine falls in love with someone she meets online.

For a decent portion of Dark Blossom, that romance angle is left in the background until suddenly it becomes a reality for Jay, and especially Nightmare. There’s a support system in place between the three that keeps the relationship relatively light, but once the relationship between Josephine and Jan gets more serious, Jay and Nightmare’s role in Josephine’s life is suddenly in question. It’s here that the documentary takes a turn and focuses less on the subculture that binds the three together and more on what threatens to separate them. It’s also where Dark Blossom becomes a little less interesting, which ends up emphasizing just how strong the bond was between Josephine, Nightmare, and Jay.

There are great conversations between the subjects that capture the essence of goth subculture, but the documentary starts falling flat once those conversations become less and less common. There’s a universal nature to how the film plays out which isn’t inherently tied to goths, but it feels like the best culture to explore that arc. Especially within the context of social media and its role in fostering communities of people who can’t easily find those groups locally. Due to when the documentary begins chronicling Josephine’s life, there’s a bit of an omission of how the three came together and it would have been interesting to see more of that or a slightly more nuanced look at how Jan and Josephine’s relationship goes from social media to real life besides suddenly meeting in real life.

Even early in Dark Blossom, there’s a gathering of goths that doesn’t feel so much like everyone is connected by their shared interest in goth culture. Instead, the three friends appear to largely stay with themselves, happy to see other people but not necessarily interact with them. It’s a community isolated within a community and while that makes the bond between the three stronger, it also counters the narrative that being with peers who are all openly expressing themselves fosters relationships. That can be traced to how relationships seem to form in Josephine’s life – all through digital means, and not from going outside. While Jay even casually remarks that he isn’t really enjoying himself like he used to at these gatherings, there’s not a substantial examination of why that is. They just sort of move on from it, eventually exploring that disconnect under the lens of Josephine’s pursuit of romance.

Dark Blossom is initially very interesting, and for those unfamiliar with modern goth culture, it’s a fascinating introduction through three people whose backgrounds offer a significant opportunity for deeper analysis. However, Fri’s documentary doesn’t really dive too deep into the elements of goth that drove the three characters towards it. They obviously have a passion for it and it is not just a phase, but there’s rarely any digging beneath the surface of each character until closer to the end. It’s a personal exploration of three friends brought together through technology because of their shared interests, and while spending time with them is both fun and engaging, it’s also only slightly rewarding.

Tom Clancy’s Without Remorse is a Sturdy, Well-Oiled Machine