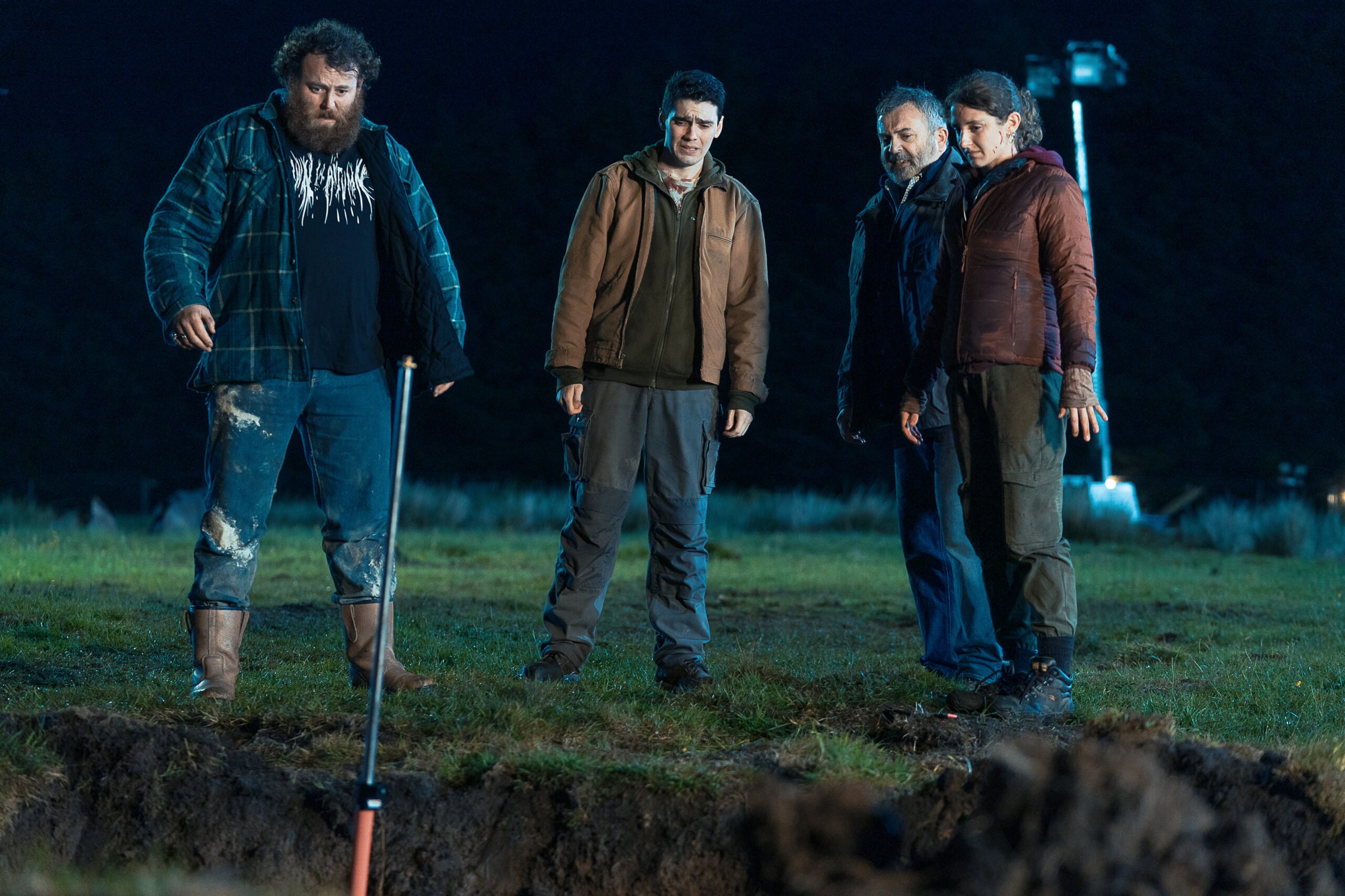 Every time there’s a movie with a familiar type of monster – zombies, vampires, werewolves, etc – a laundry list of rules immediately manifest based on every other presentation of the creatures. While there can be slight variations, it’s rare to see a film like Boys from County Hell mine an alternative source altogether and completely upend the expectations of the monster itself. Yet it does, as Chris Baugh’s latest film presents the myth of a vampire that contrasts greatly with the legendary creature’s commonly adapted traits of Bram Stoker’s version. In pulling from the legend of Abhartach, Boys from County Hell remains invigorating and fun even as it walks a similar path as other horror comedies.

The small Irish town of Six Mile Hill is boring. The residents live quiet lives doing road work, tending to the town’s few needs, and keeping themselves entertained at The Stoker – the local pub that brings tourists in to find out more about the legend of Bram Stoker’s Dracula. Supposedly the town’s local legend is where Stoker got the idea for Dracula, ultimately creating one of the most infamous monsters in the history of horror. Of course, it’s just a bunch of hogwash to most, but superstition takes hold when the pile of rocks set to serve as the grave of the vampire of legend is destroyed to make way for a highway bypass.

Much of Boys from County Hell is actually ruminating on the ways in which people end up trapped in the same cycles until ambition falls to the wayside and they accept their final resting place. Small towns are their own kind of parasite, and Baugh conveys that with Eugene (Jack Rowan) and William’s (Fra Fee) opposing lifestyles. It’s either stays in Six Mile Hill too long to do anything greater with your life, as seems to be Eugene’s destiny or prepare to pack up your bags and just leave for anywhere else like William. When Abhartach’s final resting place is disturbed and people start turning into blood-sucking creatures, it’s clear that even Eugene will have to step up and do something if he wants to keep his life.

With the help of his father, Francie (Nigel O’Neill), and his friends Claire (Louisa Harland) and SP (Michael Hough), the group is forced to band together and try and protect Six Mile Hill from a vampire that does not adhere to the rules that vampires are known to follow. Constantly cracking open a tallboy to dull the senses and scouring their respective knowledge of vampire mythology, there are a lot of obvious similarities to 2004’s Shaun of the Dead – a film where drunken camaraderie in the face of impending doom is just the surface of its appeal. In the case of Boys from County Hell, there’s not much more to examine as most of its emotional beats are par for the course for this type of small-town horror.

Even fantastic performances from most of the cast can’t help Baugh’s screenplay from retreading familiar tropes. John Lynch’s emotional delivery of a father wrestling with his son becoming a vampire is old hat at this point, and Rowan’s performance as Eugene is just fun enough to make up for the fact that his character’s biggest development is he starts to care a little more for his town after it’s threatened and he loses many people closest to him. Most noteworthy is Harland as Claire who balances being humorous, proactive, and compassionate in equal measure, but she is largely mixed in with many of the other side characters as Eugene takes center stage.

Regardless of the screenplay’s shortcomings, there’s still a lot of fun to be had with Boys from County Hell. Like any horror-comedy, there’s a lot of violence for comedy’s sake, but it’s the reactions and attitudes of those involved that sell it. Combined with some incredible gore and practical effects, horror fans will be easily satiated with a lot of the ways Baugh prods at expectations, delivers the goods, and then subverts them through a uniquely Irish vampire legend. The specific attempts at comedy help keep a healthy buzz going throughout the violence as the plot meanders between different stabs at killing the malevolent force taking over the town.

As far as horror comedies go, Boys from County Hell is one of the better ones because it isn’t just making fun of typical horror beats – it’s poking fun at them and questioning the reason they are tropes. Though it shares a lot of the same DNA as fellow brethren in the genre – almost to a fault – it’s hard not to be entertained watching small-town folks drunkenly attempt to thwart a vampire. Harrowing as their predicament may be, there’s something admirable about those seemingly destined to do nothing then rising above expectations. Boys from County Hell manages to be the entertaining horror film it sets out to be while invigorating itself with a refreshing take on vampire mythology.

50 Best Movies to not Win Best Picture at the Oscars