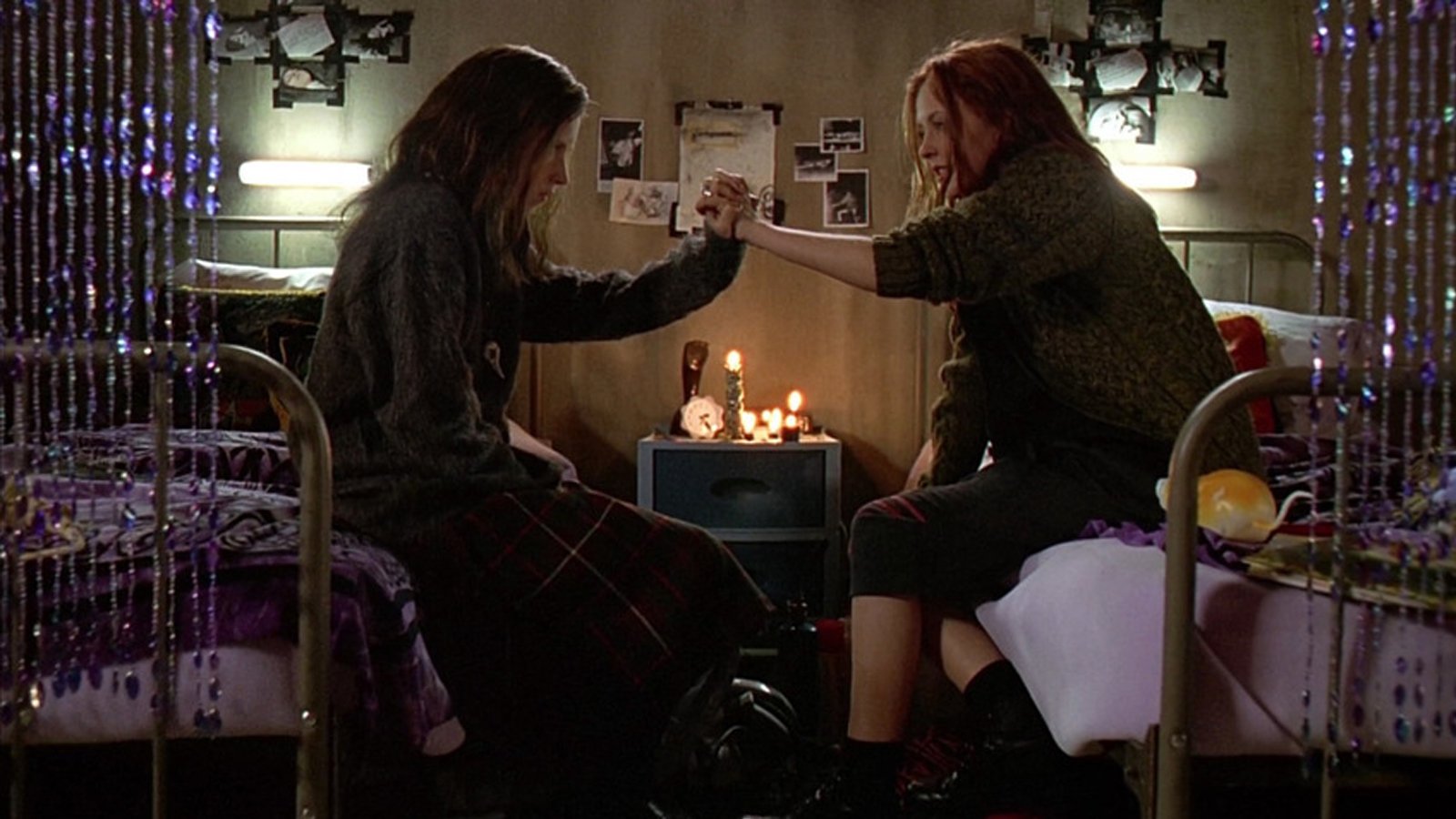 When we think of werewolves, one of the most frequent images that come to mind is a man screaming up at the moon, his human form giving into an ancient curse and turning into something wild with rage and animal instincts. We think of a creature who spends most of its time blending in with the unsuspecting townsfolk, but who runs rampant—filled with an insatiable blood-lust—during the full moon. While this is true for plenty of horror movies that focus on the line between man and monster, the first two films Ginger Snaps franchise gives us something so much more.

In 2001’s Ginger Snaps, directed by John Fawcett, we follow the adventures of Brigitte (Emily Perkins) and Ginger Fitzgerald (Katharine Isabelle), two sisters who have a morbid obsession with death. On the day of Ginger’s first period, while out with her sister, Ginger is attacked by a werewolf that’s been mauling animals in the area. Once home, they discover that her wounds have almost completely healed and Ginger begins transforming into something unnatural. She begins to have uncontrollable sexual urges, begins growing fur and a tail, and is acting overly aggressive. Although Brigitte discovers that monkshood extract can help counteract her sister’s transformation, Ginger is soon beyond saving. By the end of the film, Ginger has murdered a bunch of people and has been killed by her sister, who has been infected with the lycanthropic disease.

In the 2004 sequel Ginger Snaps 2: Unleashed, directed by Brett Sullivan, we now focus on Brigette following the death of her sister. Although she’s been trying to reverse her condition with monkshood, her body continues to change uncontrollably to the point where she considers taking her own life. By the end of the film, despite her best efforts to prevent it and despite asking for someone to kill her, Brigitte fully loses herself to the monster within.

The Movies Are About Choice…

The Ginger Snaps franchise is, at its core, a feminist series that asks itself what happens when women push back against the established order and come into their power.

Most feminist readings of the work focus on Ginger in the first movie, and how it acts as an allegory for young women becoming women. Ginger becomes a werewolf on the same day she gets her period. She’s only considered monstrous after she has sex with a boy from her grade. She only becomes the villain when she begins preying on those who formerly tormented her. And while Ginger is a feminist icon in her own right, we’re focusing this piece on her equally kickass sister, Brigitte.

Ginger spends the bulk of the first film with her werewolf powers. Her narrative is very much focused on her exploration, understanding, and embracement of these newfound powers. However, Brigitte spends the bulk of the movie standing up to her sister. She tries to help Ginger hold onto her humanity, even though it puts her repeatedly in harm’s way. While Ginger is happily a werewolf for the bulk of the story, Brigitte only becomes a creature at the end of the movie when she chooses to get infected by Ginger’s blood. It’s a curse she doesn’t want, but one she voluntarily takes in an attempt to save her sister.

In the second film, alone and becoming a monster, Brigitte is forced to once again to put her wants and desires on the backburner in an attempt to save all those around her from another, violent, werewolf. Despite getting violent and sexual urges like Ginger, who spends the film as a hallucination that torments her sister, Brigitte forces herself to cling to the last of her humanity and pushes herself to help others. Although she wants nothing more than to be cured of her lycanthropy or, failing that, to die on her own terms, she refuses to let others die without putting up a fight. One that, ultimately, results in Brigitte losing her humanity to the curse and becoming a werewolf permanently.

… But They’re Also About Sacrifice

If Ginger’s narrative is centred on what it means to claim power and agency, then Brigitte’s is centred on what it means to make personal sacrifices for the benefit of those you love. At first, this might not seem like a feminist idea at all, especially when society has conditioned women to disproportionately feel like they need to make personal sacrifices for their loved ones daily. As explored by Yamini Pustake Bhalerao in her essay “Why Are Women the Chief Sacrifice Officers in Our Society?” she explores the idea that women are often raised with the belief that their needs or wants are less important than those of their loved ones. She mentions that,

“Mums, wives, sisters, daughters, aunts, all have this notion that sacrificing something for someone you love is the ultimate way to let them know you care for them.”

Brigitte’s character very much reflects this idea. Although she wants to stay human, she infects herself with Ginger’s blood to prove to her sister that she’ll always be there for her. Although she wants to be cured of her lycanthropy, she tries to stop the male werewolf hunting her and her rehab mates down. And while she wants to hold onto her humanity, she’s ultimately overtaken by the curse.

While this might seem counterintuitive to a feminist reading, it’s important to acknowledge that self-sacrifice—and these daily sacrifices women make around the world—can be feminist acts. As explored in “Rehabilitating Self-Sacrifice: Care Ethics and the Politics of Resistance” by Amanda Cawston and Alfred Archer,

“The communicative and illustrative potential of self-sacrifice may offer another way to voice disagreement or dissent, and to give that voice force that oppressed groups lack in other media.”

Brigitte’s sacrifice in the first movie is ultimately an act of solidarity with her sister, who spends the bulk of the narrative being ostracized and depicted as the “monstrous female.” In the second movie, she ultimately loses her humanity, but still tries to save those around her too. She tries to get the monkshood extract to save herself, but doesn’t ignore the plight of those around her. Had she focused on just getting her treatment, or given into her monstrous urges, she would have lost herself to the evil within long before the curse could finish overtaking her. Brigitte’s sacrifice wasn’t a quiet acceptance of her situation, but an act of resistance that took unmatched strength and courage to make.

‘Another Round’ is a Drunken Mess, but in a Good Way