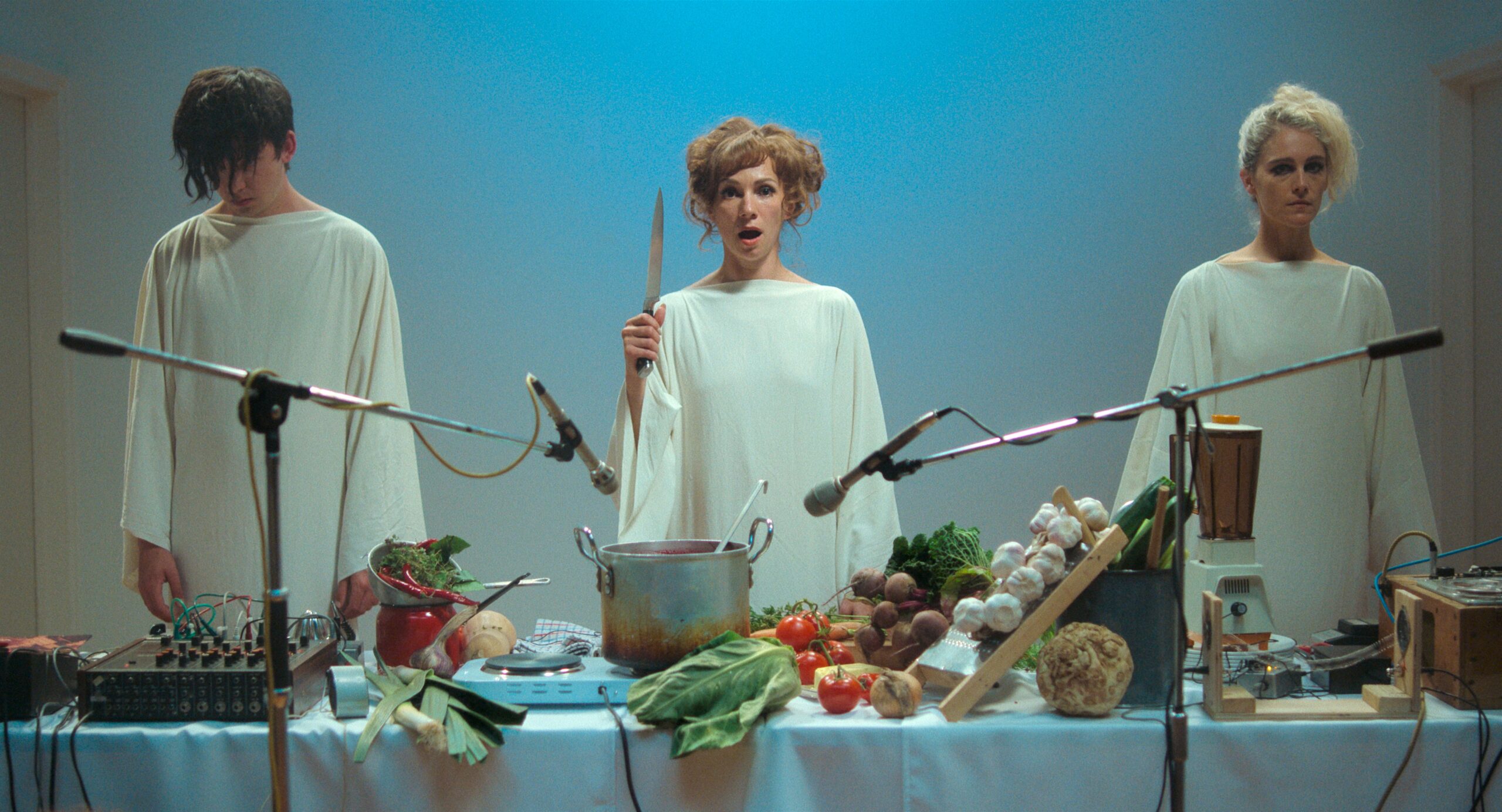 Peter Strickland, the British director of such oddities as The Duke of Burgundy and In Fabric, has returned with Flux Gourmet, a wild dark comedic that’s equally interested in matters of the high brow (cutting-edge, weird performance art) and the low brow (a surprising amount of jokes about one character’s gastronomical distress.)

A dark comedy that looks absolutely nothing like any other movie this year, Flux Gourmet does share some of the same offbeat ideas as David Cronenberg’s recent Crimes of the Future, another film that took aim at the art world’s weirdness by making it appear even weirder than the real thing.

Flux Gourmet is set during a retreat for performance artists at a remote gothic mansion, somewhere in Europe, in an era left deliberately vague (though it seems like the mid-’70s.) The artists there all practice something called  “sonic catering,” a method of creating music out of the sounds made by food.

While it sounds fictional, The Sonic Catering Band is actually a real thing- and Strickland himself once had a band that made it. This movie, though, treats the genre as a viable and popular genre of music.

Standing off to the side is a character tasked with recording the proceedings. He’s Stones (Makis Papadimitriou), a journalist suffering from gas and other stomach issues. In the movie’s best trick, he narrates and writes down his observations- but rather than being about the artistic intrigue going on around him, they’re mostly about his stomach pains and how they put him at a remove from life at the retreat.

The narrations, presented in Greek with subtitles, are some of the best stuff in any movie this year.

“The nights were full of agony, as the trapped wind took over my bowels and mind,” he says. “Every fart involved plodding and worry…” Richard Bremmer has a delicious part as “Dr. Glock,” the institution’s house physician, and Stones’ hope for solving his stomach nightmares.

Between Flux Gourmet, and the recent What We Do in the Shadows episode where the guy on the subway farts along to “Pennsylvania 6-5000,” it’s been quite a month for flatulence-based entertainment.

And I give the film credit for only implicitly being about cannibalism, as opposed to the half-dozen movies this year that have based their entire ad campaigns on hints of people eating other people.

Yes, Flux Gourmet is weird as hell, but it’s weird in a good way. It also brings together its themes in a much more satisfying way than was done with Cronenberg’s performance-art film.

DC League of Super-Pets is a Mostly Witless Affair